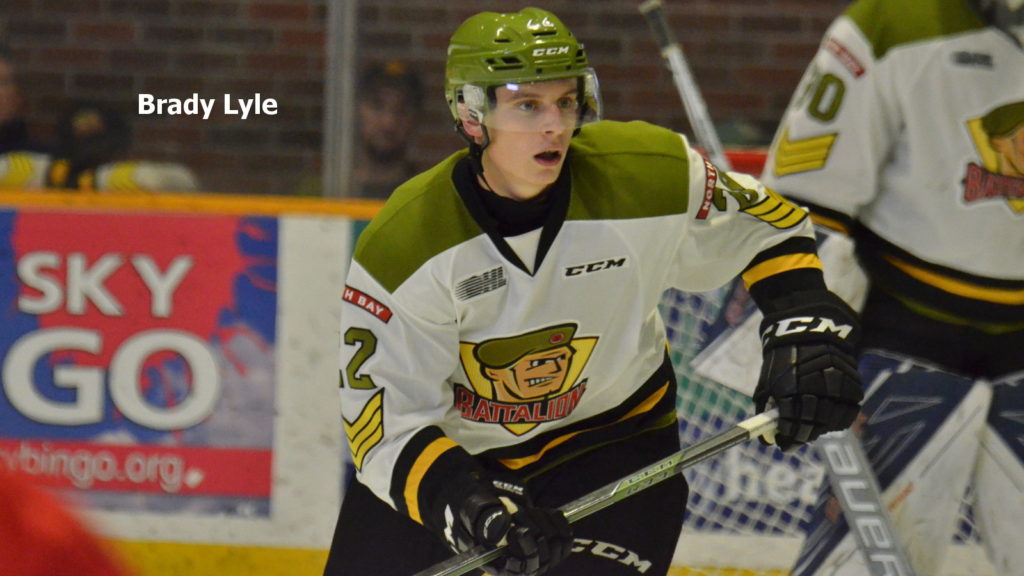 Lyle is No. 48, fellow defenceman Thilander is No. 96 and right winger Brazeau is No. 206 on the 217-player list of North American-based skaters released Tuesday in advance of the 2017 NHL Draft scheduled June 23-24 at Chicago.

Lyle, who had one goal and nine assists for 10 points in 44 games as a rookie a year ago, was the Troops’ first-round pick, 18th overall, in the 2015 OHL Priority Selection from Shattuck-St. Mary’s, a private school in Faribault, Minn. He was the top-scoring defenceman as his under-16 team won the United States national championship.

“I’m really happy,” said Lyle. “It’s a really good feeling to be ranked where I am, but the biggest thing for me is not to get complacent. I need to keep working on my game on and off the ice in order to get ready for next season and whatever the future holds.”

Thilander, a six-foot, 190-pound native of Skovde, Sweden, was the Battalion’s first-round choice, 36th overall, in the 2016 Canadian Hockey League Import Draft from the Skelleftea AIK under-20 team. He scored six goals and added 29 assists for 35 points in 64 games.

Thilander, who turned 18 last Sept. 18, won a silver medal with Sweden at the 2016 world under-18 championship at Grand Forks, N.D. He had two assists in five games at the 2015 Ivan Hlinka Memorial Tournament held in the Czech Republic and Slovakia, in which Sweden lost the championship game 7-3 to Canada, coached by the Battalion’s Stan Butler.

Centre Nolan Patrick of the Western Hockey League’s Brandon Wheat Kings is No. 1 on the list, while centre Gabriel Vilardi of the Windsor Spitfires is the top-rated OHLer at No. 4.

There are eight OHLers on the North American goaltending list, with Windsor’s Michael DiPietro the highest-ranked at No. 4.