Back to play at North Bay 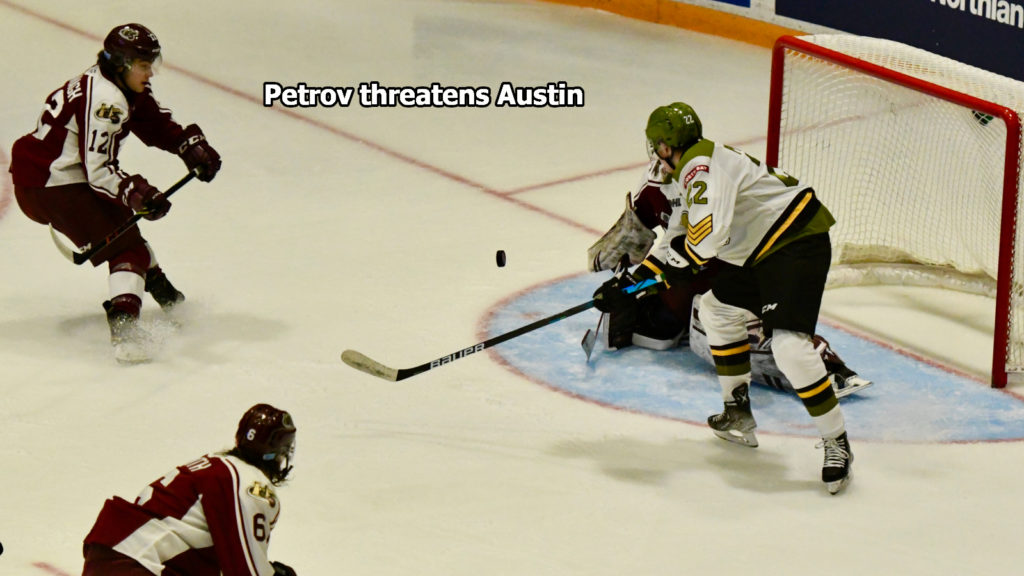 NORTH BAY, Ont. — The Ontario Hockey League returned to play at 7:15 p.m. Thursday when referee Mike Hamilton first dropped the puck between Kyle Jackson of the North Bay Battalion and J.R. Avon of the Peterborough Petes.

What’s hoped to be the start of the OHL’s post-pandemic era opened 575 days after the last games were played March 11, 2020. It was three more days back to the Battalion’s last game, an 8-0 loss to the visiting Ottawa 67’s, before the rest of the season, playoffs and, eventually, the entire 2020-21 campaign were lost.

A crowd of 1,890 at Memorial Gardens, restricted to 50 percent capacity by pandemic protocols, loudly welcomed the Troops back during pregame introductions, according especially enthusiastic responses to head coach Ryan Oulahen and newly named captain Liam Arnsby.

Avon and Emmett Sproule had one goal and one assist apiece for Peterborough, while Tucker Robertson and Sam Alfano also connected. Goaltender Tye Austin surrendered six goals on 37 shots before Coe collected an empty-netter at 19:11 of the final frame.

The winner resulted when Jackson fired the puck off Petes defenders from the left wing at 3:33 of the period. Russian Petrov, the No. 1 pick in the 2020 Canadian Hockey League Import Draft, made a brilliant passing play to reverse the puck but hadn’t yet been credited with an assist. Petrov then converted into a gaping net from wide on left wing on the power play at 12:02.

Fans were treated to a wide-open first period that ended in a 4-4 tie before the teams settled down for a scoreless second frame.

Avon carried OHL scoring into the new season 52 seconds after the opening faceoff, beating Vrbetic on a breakaway, before Petrov replied at 5:01, cashing a rebound on assists by Nelson and Jackson.

Currie connected on a shorthanded solo break-in at 7:40, just 19 seconds after having an apparent goal at the right post denied upon video review. Petrov scored again at 9:55, charging to the net off the right wing, for a 3-1 lead.

But Robertson shoveled home a backhand at 10:51 before Coe broke away from the blue line to score with the man advantage on assists by Nelson and Vrbetic at 14:35.

North Bay’s Alexander Lukin, a Russian import taken in the first round this year, drew a head-checking major and game misconduct at 16:11, and Peterborough netted two power-play goals, by Sproule from the slot at 16:27 and Alfano on a goalmouth tip at 18:13.

It was the latest season opener in Battalion history, which dates to 1998-99, and the third-latest home opener, after Oct. 11, 2013, at North Bay and Oct. 9, 1998, at Brampton. There were two other games on the schedule, but both started after the Troops’ engagement.

Fans had to show proof of vaccination against covid-19, with government-issued identification required. Masks were mandated to be worn at all times inside the arena except when consuming food and beverages.

The Battalion visits the Sault Ste. Marie Greyhounds at 7:07 p.m. Friday before returning home for the traditional Thanksgiving Day game, when the Sudbury Wolves are the visitors at 2 p.m. Monday.

BATTALION BULLETS: The Battalion has an all-time won-lost-tied record of 7-15-1 in season openers, including one overtime loss and one shootout loss. Since relocation from Brampton in 2013, the Troops have a won-lost-extended record of 3-4-1 in season openers, including 3-3-1 at North Bay … The Battalion is 8-13-2 all-time in home openers, including 3-4-1 at North Bay and 1-2-0 against Peterborough … Opening lines saw Jackson centring left winger Petrov and right winger Coe, Arnsby centring left winger Currie and right winger Alex Christopoulos, Dalyn Wakely centring left winger Owen Van Steensel and right winger Nic Sima and Michael Podolioukh pivoting left winger Owen Outwater and right winger Christian Stevens … Defence pairings had Avery Winslow with Simon Rose, Tnias Mathurin with Nelson and Lukin beside Paul Christopoulos … Dom DiVincentiis backed up Vrbetic … Petrov, Wakely, Van Steensel, Sima, Podolioukh, Outwater, Mathurin, Nelson and Lukin made their OHL debuts … The Battalion scratched Cam Gauvreau, Anthony Romani and Mitchell Russell … With alternate captain Russell sidelined, Rose was named to wear an ‘A’ at home and Nelson a letter on the road … North Bay went 2-for-6 on the power play. Peterborough was 2-for-9 … Ryan Elbers was the other referee, while Ryan Card and Darren Long were the linesmen.