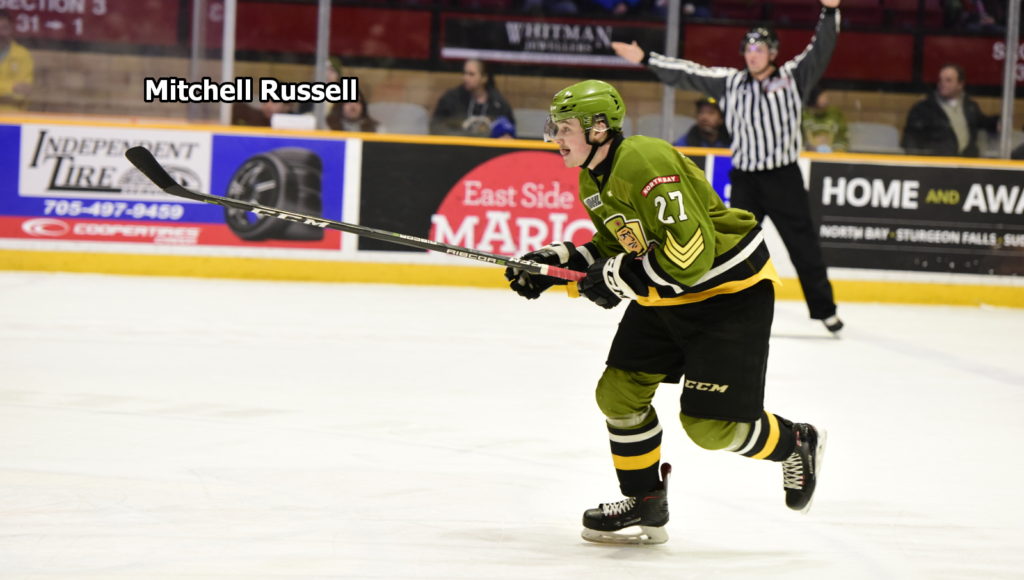 NORTH BAY, Ont. — The North Bay Battalion boarded the bus Thursday to a series of weekend Ontario Hockey League exhibition games with a total of 26 skaters and goaltenders ready to take part.

The Battalion has 16 forwards, seven defencemen and three goaltenders in tow for the second annual Preseason Showcase at Kitchener, with two other players recovering from injuries.

In addition, right winger Kurtis Evans and rearguard Ryan Thompson are at home nursing a concussion and wrist injury respectively.

Of the 26 skaters and goaltenders, 14 were full members of the Battalion roster last season, with Jackson, Hardwick and Vrbetic having seen limited action. Arnsby was the club’s first-round pick in the OHL Priority Selection in June from the Don Mills Flyers minor midgets.

Goaltender Reece Proulx was assigned to the Pembroke Lumber Kings, the Battalion’s junior A affiliate in the Central Canada Hockey League, after practice Thursday, while Campbell and Cicigoi signed standard player’s agreements including education packages with the Troops.

Campbell, a 17-year-old Callander resident who played last season with the Powassan Voodoos of the Northern Ontario Junior Hockey League, at the time the Battalion’s junior A affiliate, was a fourth-round pick from the North Bay Trappers minor midgets in the 2018 OHL Priority Selection.

Cicigoi, 18, was a sixth-rounder from his hometown Thunder Bay Kings under-16s in 2017. He too played for Powassan last season.

“It’s over, and now the real evaluation begins,” Stan Butler, director of hockey operations and head coach, said of the Battalion’s training camp, which opened Sunday with fitness testing and medicals and saw 45 players hit the ice for as many as four intrasquad games.

“Now we go to Kitchener and play preseason games, which are the next stage of the process.”

North Bay faces the Kitchener Rangers, hosts of the four-team Showcase, at 7 p.m. Friday before meeting the Peterborough Petes at 2 p.m. Saturday and the Saginaw Spirit at 11 a.m. Sunday.

The Battalion, which played in a defunct similar tournament at Buffalo, N.Y., two years ago, competed in the Kitchener event last season, defeating the Moncton Wildcats of the Quebec Major Junior Hockey League and losing to Kitchener and Saginaw.