Troops a secret no more 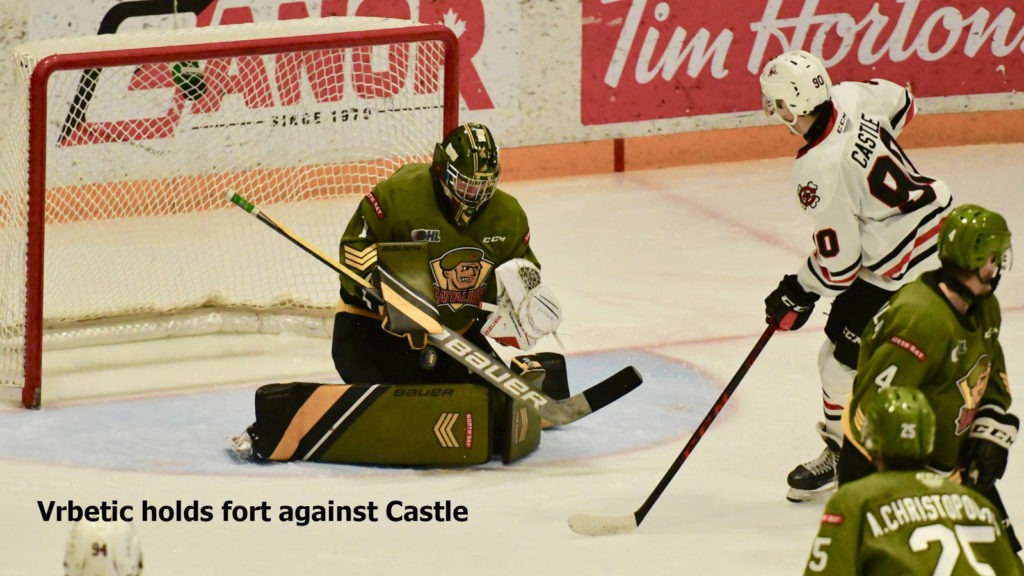 NORTH BAY, Ont. — The North Bay Battalion, riding a four-game winning streak, heads back on the road for a three-game eastern swing this week that starts a run of five Ontario Hockey League away games.

First up is a 7:05 p.m. date Thursday with the Peterborough Petes, whom the Troops have defeated twice this season but who figure to show increased resistance. The Battalion downed the Petes 7-4 at home in the season opener Oct. 7 and 6-3 as visitors Nov. 4 during a season-high six straight road games.

The game features the OHL’s top two scorers in Peterborough’s Tucker Robertson, who has 15 goals and 19 assists for 34 points in 17 games, and North Bay’s Brandon Coe, a point behind with nine goals and a league-leading 24 assists in 19 games. Coe was named the OHL’s Player of the Week for the period ended Sunday.

In addition, Mason McTavish figures to make his season debut with the Petes, who were buoyed by the recent announcement that the Anaheim Ducks would return him to the OHL. Anaheim selected McTavish third overall in the National Hockey League Draft in July.

“When you insert a top player, he’s certainly going to improve their club, and I just think, with Peterborough too, you can’t just look at their record,” Battalion coach Ryan Oulahen said Wednesday.

“They actually are a very strong hockey club. When you look at our league standings and individual leaders, they have some of those guys on their hockey club, so they’re a dangerous team and, to note, are a really good hockey club at home.”

The Battalion, which visits the Kingston Frontenacs on Friday night and the Ottawa 67’s on Saturday, has a won-lost-extended record of 12-6-1 for 25 points atop the Central Division and Eastern Conference. Peterborough, 6-10-1 for 13 points, fifth in the East Division and ninth in the conference, is coming off a 9-3 victory Sunday at Ottawa in which Robertson had one goal and five assists.

The Battalion, which defeated the visiting Niagara IceDogs 7-3 Sunday, travels with a new degree of national notoriety, having been named the No. 9 team in the Canadian Hockey League’s Top 10 rankings announced Wednesday. And, apart from Coe’s recognition for last week, Joe Vrbetic was selected as the OHL’s Goaltender of the Week for the period ended Nov. 14.

“It’s nice to get recognized, but I think the main message here is, you know, ‘Let’s continue it; let’s grow,’” noted Oulahen, who acknowledged that the word on the Troops is out.

“I don’t think it’s a secret anymore. Teams know that we’re a strong hockey club, and they are going to be ready and we’re going to see a lot of their best games. We’ve got to be ready for it.”

General manager Adam Dennis agreed that the Battalion has made considerable strides.

“I think that the coaches have done a great job with this group and they’re performing at an optimal level. Yeah, I’d say we’re a little ahead of schedule.”

National notice included the naming of Coe to the CHL Team of the Week for the period ended Sunday. He is joined by Robertson and Kyle McDonald of the Windsor Spitfires as the forwards, defencemen Ronan Seeley of the Western Hockey League’s Everett Silvertips and Lukas Cormier of the Quebec Major Junior Hockey League’s Charlottetown Islanders, and goaltender Olivier Adam of the Baie-Comeau Drakkar of the QMJHL.

McTavish, who turned 18 on Jan. 30, played nine games with Anaheim, producing two goals and one assist for three points and becoming the youngest scorer in Ducks history. He also skated in three American Hockey League games for the San Diego Gulls, with one goal and one assist for two points.

As an OHL rookie in 2019-20, McTavish, chosen fifth overall in the 2019 OHL Priority Selection, had 29 goals and 13 assists for 42 points in 57 games. Last season he played 13 games for Olten in the Swiss League, Switzerland’s second-tier circuit, registering nine goals and two assists for 11 points.

The Battalion will be without forward Owen Outwater, who left Tuesday for Ottawa and the Capital City Challenge that starts Friday and features three Canadian under-17 teams and the national women’s team in a tournament that ends next Wednesday. Outwater, North Bay’s first-round pick in the Priority Selection in June, has been assigned to Team Red.

A total of 21 OHL skaters and goaltenders are to take part in the tournament, a one-time event replacing the World Under-17 Challenge, which was cancelled because of the coronavirus pandemic.

The game at Peterborough can be seen live in North Bay on YourTV Channels 12 and 700.