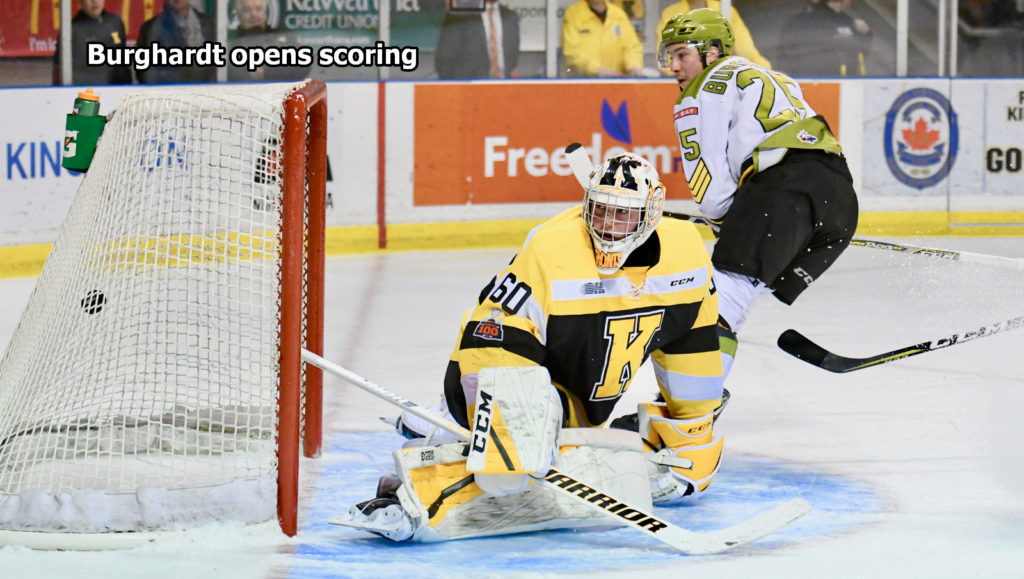 KINGSTON, Ont. – The North Bay Battalion made a successful return to Ontario Hockey League playoff action Friday night after missing the postseason a year ago.

Luke Burghardt scored two goals and added an assist to power North Bay to a 5-2 victory over the Kingston Frontenacs in the opener of the teams’ best-of-seven Eastern Conference quarterfinal.

Nick King, Jake Henderson and Justin Brazeau, into an empty net, also scored for the sixth-place Battalion, which got two assists from Matthew Struthers and 32 saves from goaltender Christian Propp, who like a slew of Troops made his OHL playoff debut.

Eemeli Rasanen had one goal and one assist for third-place Kingston, which got its other goal from Jason Robertson. Goaltender Jeremy Helvig faced 44 shots before 2,766 at the Rogers K-Rock Centre, the site of the second game at 6 p.m. Sunday.

Burghardt struck first at 8:48 of the opening period. Struthers fed the puck from one blue line to the other, sending Burghardt in alone on Helvig with Jakob Brahaney in pursuit, and Burghardt beat the goaltender high to the stick side.

Robertson replied on the power play at 16:22. Sean Day slipped the puck off a rush to Robertson, who put a low shot between Propp’s pads from the left-wing circle.

The Battalion, which forged a 14-7 edge in shots, had several early chances, but Helvig was sharp against Henderson, Andy Baker, Kyle Potts and Luke Moncada. Robertson missed an open net on the power play in the 12th minute, and a Cliff Pu shorthanded drive to the net at 15:05 led to a long talk between referee Mike Cairns and the video goal judge before the no-goal call was upheld.

Defenceman King scored what proved to be the winner with the man advantage at 13:32, moving deep into the left circle and firing an Adam McMaster pass over a sprawling Helvig. Brad Chenier drew the other assist.

The Battalion, which had three power plays in the period, directed 20 shots at Helvig, who produced solid stops on Chenier, Thilander, Brazeau and Brandon Coe. Propp, who snared a drive from Pu in close at 5:12, also denied Robertson, Ted Nichol and Brett Neumann, while Linus Nyman and Gabriel Vilardi both missed the net from close range.

Rearguard Rasanen cut Kingston’s deficit to 3-2 at 6:37 of the third period, darting into the left circle and blasting a cross-ice pass from Nyman past a sprawling Propp.

With the Frontenacs pressing on the way to a 16-11 shots advantage in the period, Henderson raced to negate an icing, battled Rasanen behind the net and found his way to the left circle, from where he cashed a cross-zone pass from Struthers at 15:58.

Helvig left for a sixth skater with 2:45 to play, and Brazeau connected into the empty net at 18:13. Burghardt and Jesse Saban earned assists.

Propp stoned Neumann with a left-pad save from point-blank range in the 15th minute and rolled through the crease to deflect a Robertson drive from the right circle in the 17th.

The game Sunday can be seen live in North Bay on YourTV Channels 12 and 700 and heard on Country 600 CKAT.

BATTALION BULLETS: In its first 19 seasons, the Battalion won 15 of 31 playoff series, including six of nine since relocating to North Bay from Brampton for the 2013-14 season. In that time, the Battalion had a won-lost record of 74-87 in 161 postseason games, including 40-40 at home and 34-47 on the road … The Battalion is 20-12 in series openers, including 8-10 in away games … The Battalion’s Stan Butler is third among active coaches in credited playoff wins with 79, behind Dale Hunter of the London Knights at 128 and George Burnett of the Guelph Storm at 99 … Before the game, only seven Troops had postseason experience, with Riley Bruce at 41 games and Brazeau and Potts at 11 each the only ones to have worn Battalion uniforms. Among players acquired via trades since last season, Struthers had played 21 games, Henderson 10, Burghardt four and Saban three, for a team total of 101. Bruce and Struthers, with two each, were the only ones to have scored a goal … Each team went 1-for-4 on the power play … The Battalion was without Daniel Walker, Kurtis Evans and Simon Rose, who marked his 17th birthday … Among the missing for Kingston, which dressed 11 forwards and seven defencemen, were Paul Larabie and Max Jones, who has played only six games since a Jan. 7 trade from London after suffering a broken finger … Quincy Evans was the other referee.