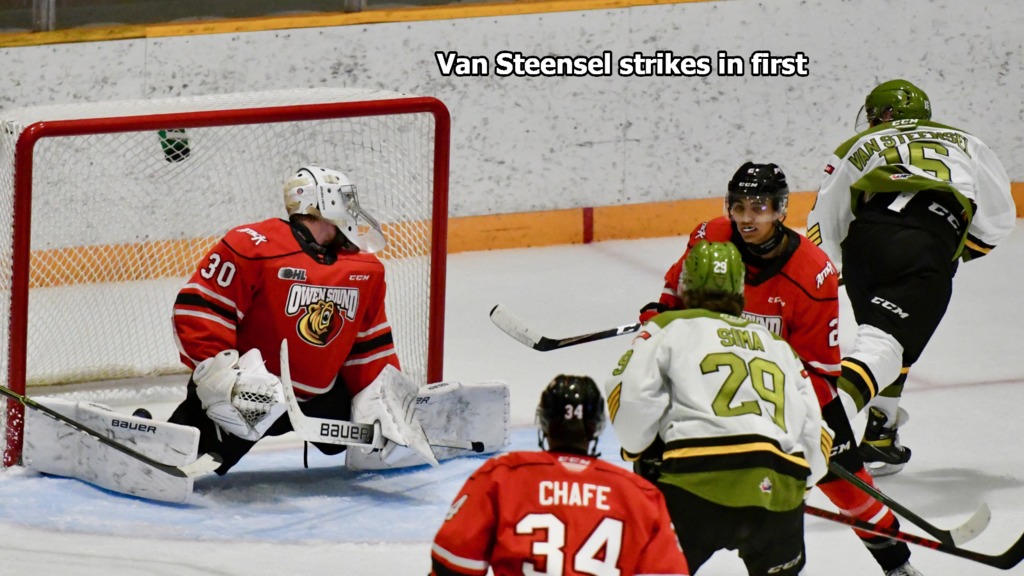 Battalion rookies accounted for the other goals, as Owen Outwater, who also had an assist, scored an empty-netter at 18:56 to ice the win.

Owen Van Steensel and Dalyn Wakely also scored for the Battalion, which played for the first time since the 2019-20 OHL season was suspended because of the coronavirus pandemic, costing the Troops their last six games of that campaign and the entire 2020-21 season.

Each team had 17 in uniform rather than the permissible 20, with numerous players away at National Hockey League camps.

Defenceman Sedley tied it 2-2 at 2:59 of the final period, converting a rebound off the end boards on assists by Igor Chibrikov and Stepan Machacek.

Currie seized an errant clearing attempt in the right-wing circle and snapped the puck past Votary to give the Battalion its second lead of the game, and the Troops weathered an Owen Sound push for the equalizer. Votary left for a sixth attacker with 2:10 to play before Outwater settled the issue.

The sometimes chippy affair saw a scrum develop in the Battalion crease, with Cal Uens and Thomas Chafe of the Attack and the Battalion’s Liam Arnsby and Alex Christopoulos handed roughing minors at 17:08.

Wakely broke a 1-1 tie at 4:49 of the second period when North Bay made Owen Sound pay for a questionable slashing call against Outwater, a first-round pick in the 2021 OHL Priority Selection. Outwater emerged from the penalty box to gather the puck and thread a pass between two backcheckers to the onrushing Wakely, who slipped the disc home at the right post.

LeSage opened the scoring on the power play at 4:16 of the first period when he redirected a soft screened shot by Julian Fantino from the high slot.

Proulx then robbed Fantino in the 10th minute, sprawling to block a shot off a pass on a two-man break-in.

Van Steensel replied at 12:10, taking a pass from Ty Nelson and cutting across the goalmouth from deep on the left wing to backhand the puck past Votary. Nelson, who was a force at both ends of the ice, was the Battalion’s first-overall pick in the 2020 Priority Selection.

Kyle Lekun was the lone referee. The OHL has decided to revert to the two-referee system from the one-man plan in effect to start the preseason.

The Battalion visits the Ottawa 67’s at 7 p.m. Friday to open a home-and-home series that continues at Memorial Gardens at 4 p.m. next Saturday.