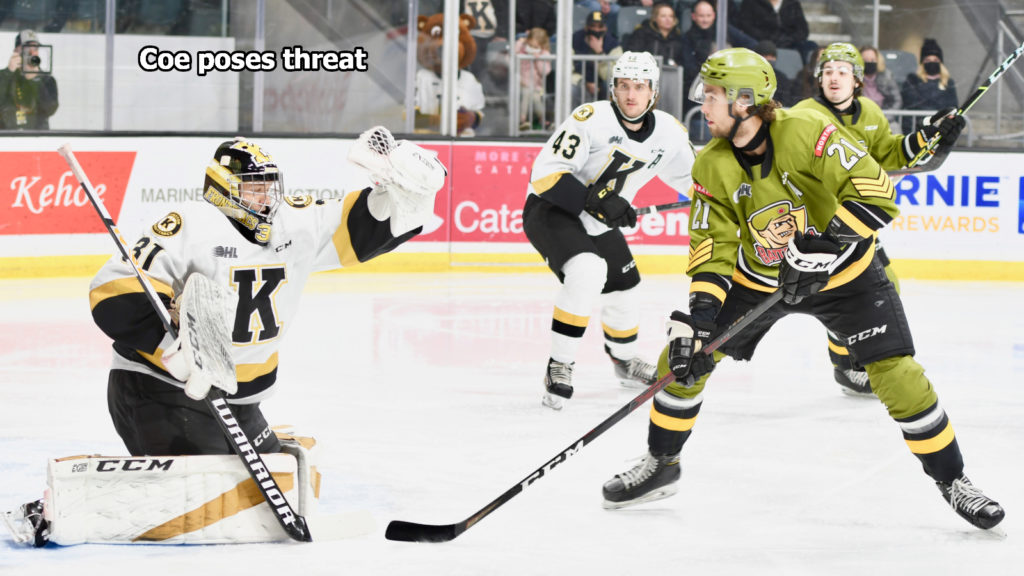 KINGSTON, Ont. — Kyle Jackson scored two goals, including the winner and an empty-netter, and added two assists to pace the North Bay Battalion to a 5-2 victory over the Kingston Frontenacs in Ontario Hockey League action Friday night.

Mitchell Russell and Matvey Petrov each had one goal and one assist and Alex Christopoulos also scored for North Bay, which improved its won-lost-extended record to 13-7-1 for 27 points atop the Central Division and Eastern Conference.

Goaltender Joe Vrbetic faced 26 shots before a crowd of 2,691 at the Leon’s Centre as the Battalion played the middle game of a three-game eastern swing after a 5-3 loss Thursday night to the Peterborough Petes.

Brandon Coe, the OHL’s scoring leader, pushed his points total to 38, on 11 goals and a league-high 27 assists, with a pair of helpers. Jackson and Petrov are third and fourth in the scoring race, with 33 and 32 points respectively.

Assistants Scott Wray and Bill Houlder ran the North Bay bench in the absence of coach Ryan Oulahen, who attended to a family matter.

Nathan Poole and Francesco Arcuri scored for Kingston, 9-5-3 for 21 points, tied with the Oshawa Generals for third place in the East Division. Goaltender Leevi Merilainen made 29 saves.

The Battalion forged a 2-1 first-period lead, sparked by Russell’s 11th goal of the season on the power play at 8:17. Coe rushed down the right wing and fed the puck to the middle to Jackson, who slipped it to Russell on the left side with an open net.

Poole replied with his first OHL goal at 12:40, taking a cross-ice pass from Gage Heyes and connecting from the right circle.

Petrov put on a dazzling display, circling the offensive zone in a clockwise direction and, at the top of the slot at the blue line, blasting the puck through traffic at 18:24. Assisted by Jackson and Coe, it was Petrov’s team-leading 16th goal.

Liam Arnsby and Kingston’s Braden Hache fought 33 seconds into the period, with Arnsby, who got the takedown, drawing a blindsiding minor and fighting major to Hache’s instigating minor, major and misconduct.

Arcuri tied it 2-2 at 4:45 of the second period, cashing the rebound of a Jordan Frasca shot as the Battalion failed to keep the net front tidy.

Jackson struck for what proved to be the winner on the power play, with the Troops skating four against three, at 17:23. Jackson knocked home the puck after it got behind the kneeling Merilainen at the left post. Jackson is tied for second in the league in game-winning goals with four.

Christopoulos collected his first goal of the campaign at 6:28 of the final frame. Michael Podolioukh won a puck battle in the left corner and Josh Currie emerged with the disc, feeding Christopoulos in the slot. Early in the second period, Currie hit the left post after winning a race to negate icing.

Merilainen left for a sixth attacker with just under three minutes left, and Jackson, who earlier passed up a chance at the empty net, put his 13th goal into the cage at 19:57 with an assist from Petrov.

The Battalion visits the Ottawa 67’s at 2 p.m. Saturday. The game can be seen live in North Bay on YourTV Channels 12 and 700.

BATTALION BULLETS: It was the teams’ second meeting, after the visiting Battalion won 5-4 on Nov. 5. North Bay and Kingston face off Feb. 6 and March 6 at Memorial Gardens … Coe has a 10-game points streak in which he has five goals and 17 assists for 22 points. His 10-game assists streak is the OHL’s longest. In 209 career games, Coe has 63 goals and 92 assists for 155 points, one more than Brad Chenier and 14th in franchise history … Petrov has a seven-game points streak in which he has six goals and eight assists for 14 points … The Battalion went 2-for-2 on the power play. Kingston was 0-for-3 … North Bay was without Tnias Mathurin, injured at Peterborough, and Owen Outwater, who’s at the Capital City Challenge, featuring three Canadian under-17 teams and the national women’s team, at Ottawa … Kingston’s Quinton Burns was added to the tourney as an injury replacement. Matthew Soto, taken fifth overall in the OHL Priority Selection in June, leads the Frontenacs’ contingent … Defenceman Ben Roger, 19, made his Frontenacs debut after a trade Thursday from the London Knights for three Priority Selection picks, one of them conditional … North Bay product Lucas Edmonds of Kingston saw the end of a seven-game points streak in which he had five goals and 12 assists for 17 points … Frasca has a six-game points streak during which he has five goals and as many assists for 10 points.