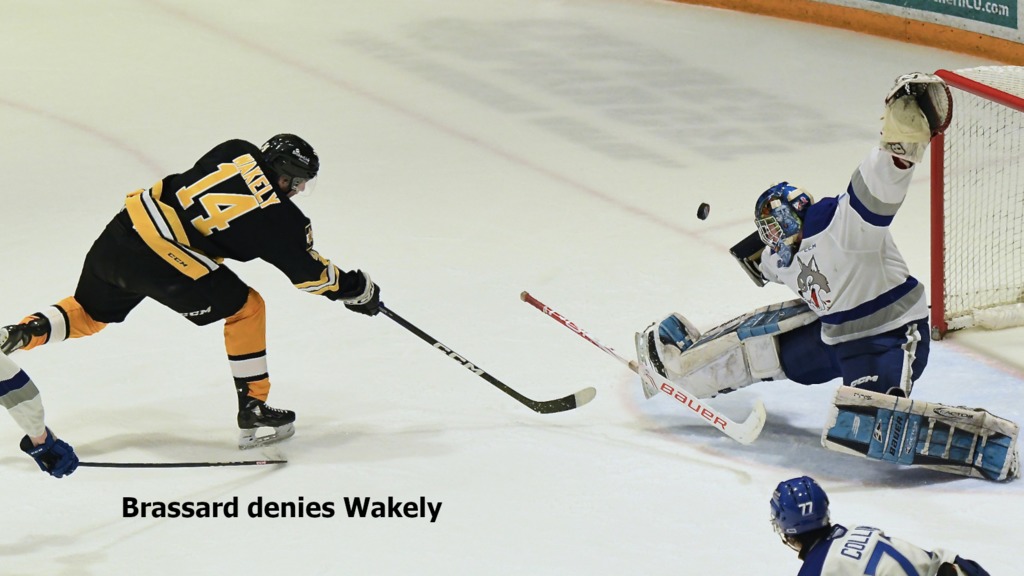 NORTH BAY, Ont. — Kyle Jackson scored at 3:50 of the third period to lift the North Bay Battalion to a 2-1 victory over the Sudbury Wolves in a fiercely contested Ontario Hockey League game Sunday.

Jackson assisted on an earlier goal by Matvey Petrov, and goaltender Dom DiVincentiis provided 20 saves as North Bay improved its won-lost-extended record to 30-11-2 for 62 points atop the Central Division. The Troops are second in the Eastern Conference, two points behind the East Division’s Ottawa 67’s, who lost 4-1 to the host Owen Sound Attack.

David Goyette scored for Sudbury, 17-19-5 for 39 points, fourth in the Central. Goaltender Kevyn Brassard faced 34 shots before a crowd of 2,492.

Mike McIvor, called up from the North Bay Trappers U18s, backed up DiVincentiis. Brice Cooke of the Mississauga Steelheads crashed into Charlie Robertson in the first period of a 5-4 road loss Friday night. Robertson, who finished the game, is to play in the CHL-NHL Top Prospects Game at Langley, B.C., Wednesday night.

“I feel good about this game,” said coach Ryan Oulahen, whose black-clad Troops had lost their previous two outings, including a 4-3 overtime setback Thursday night to the Hamilton Bulldogs at Memorial Gardens. “I thought there were signs of us just getting back on track.”

Jackson gathered the puck off the end boards on the rebound of a left-point drive by Ty Nelson and banked the disc off Brassard’s left leg from behind the goal line at the right side to break a 1-1 tie. Kyle McDonald had the other assist on Jackson’s team-leading 25th goal of the season.

A sprawling DiVincentiis made a game-saving left-pad stop on Goyette in the slot in the 16th minute, with the puck deflected wide right, and the Battalion killed a tripping penalty issued to Josh Bloom at 15:56 before surviving a series of defensive-zone faceoffs against six attackers in the final minute.

Petrov opened the scoring 59 seconds into the middle period, converting a goalmouth pass from Jackson after Brassard knocked down but couldn’t corral a pointblank shot by Bloom. It was Petrov’s 20th goal and his fifth in the last three games.

Petrov hopped off the bench to grab the puck at the Sudbury blue line for a two-man break-in with Pasquale Zito, but a backhanded pass in tight resulted in Brassard snagging Zito’s shot at 3:32.

Ten seconds later, Goyette eluded Petrov on a left-wing rush and beat DiVincentiis to the glove side. Goyette’s team-leading 27th goal was assisted by Landon McCallum and Nick DeGrazia.

The Battalion outshot Sudbury 11-7 in the first period, with Dalyn Wakely, McDonald and Alexander Lukin applying solid pressure around the five-minute mark.

Penalty killer Alex Pharand shot wide right of DiVincentiis’s net after Ethan Larmand was assessed an instigating minor and misconduct for a fight with Lukin at 12:59, with both combatants receiving a major as Lukin got the takedown. DiVincentiis foiled a tuck attempt by Nathan Villeneuve in the crease at 15:58.

The Battalion plays host to the Windsor Spitfires at 7 p.m. Thursday on Equality, Diversity and Inclusion Night presented by the City of North Bay.