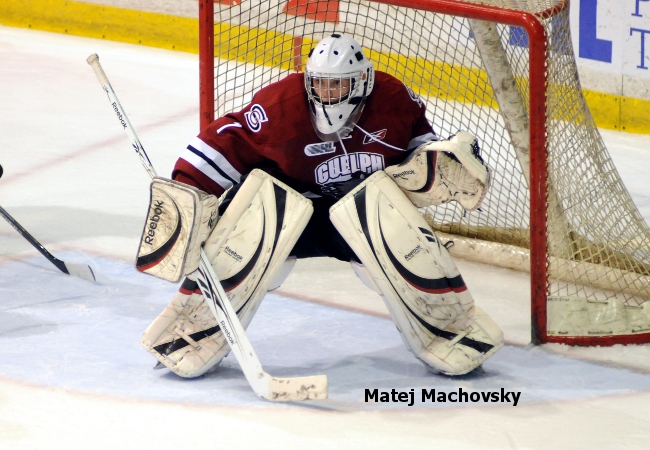 BRAMPTON, Ont. – In the space of two days, Stan Butler has provided the Brampton Battalion with entirely new goaltending.

Cody St. Jacques will start in goal against the visiting Mississauga St. Michael’s Majors at 7 p.m. Thursday, backed up by Matej Machovsky. Jacob Riley and Dennis Saikkonen, both of whom played Sunday in the Battalion’s most recent game, are gone.

The Battalion, which signed free-agent St. Jacques on Tuesday, acquired Machovsky from the Guelph Storm in an Ontario Hockey League trade Wednesday for defenceman Kyle Pereira and a conditional sixth-round pick in the 2014 OHL Priority Selection.

The Storm made another trade Wednesday, obtaining Slovakian right winger Richard Panik from the Belleville Bulls. The arrival of import Panik necessitated the departure of Machovsky, a 17-year-old from the Czech Republic who was a second-round pick in the Canadian Hockey League’s Import Draft in June.

Butler tabbed overager St. Jacques to start against the Majors, who have won eight straight games and haven’t lost in regulation time since a 3-2 setback to the host Saginaw Spirit on Oct. 22. The Troops visit Sudbury at 7:30 p.m. Friday and host the Sarnia Sting at 2 p.m. Sunday.

“We always have spirited games against the Majors, and I don’t think tomorrow night will be any different,” said Butler, who was moved to action after seeing his charges win two of their last 13 games.

Machovsky, six-foot-two and 187 pounds, played five games with Guelph, posting a won-lost-extended record of 2-2-0 with a 4.10 goals-against average and a .910 save percentage. Machovsky, first-time eligible for the National Hockey League’s Entry Draft next June, earned his first OHL win Oct. 24 when he made 51 saves in a 4-1 verdict at Brampton.

“People in the NHL that I talked to rate him very highly,” said Butler. “The only game I’ve seen him play live was against us, and he was awfully good.

“We’re hoping these two guys have stabilized our goaltending for now and down the road. It was tough losing Pereira, but he wanted to play in the OHL as an overager and, with our young defence, that opportunity wouldn’t have been here.”

A 19-year-old Brampton resident, Pereira was a sixth-round pick in the 2007 OHL Priority Selection who has two goals and nine assists for 11 points in 24 games this season. Over three OHL seasons, he has eight goals and 33 assists for 41 points in 136 games.

“It came as a bit of a shock, but I’m excited about the opportunity,” said Pereira. “They have a good team over there, and I hear it’s a good group of guys. I’ll go in and help in any way I can. It’s unfortunate to leave the guys here. I had a great time. I can’t say enough about my time here, but that’s the way hockey goes sometimes. I’m very thankful to have had the chance to play in my home town. I have nothing but great memories.”

Said Butler: “Kyle did everything we asked of him. He was a model citizen on and off the ice.”

Saikkonen, who turned 18 last Saturday, also was a second-round import pick in June. The first European to tend goal for the Battalion, he appeared in 13 games with a record of 4-6-0 with a 4.13 GAA and an .850 save percentage.

He came off the bench Sunday to relieve Riley for the penalty-shot process and recorded a 5-4 victory via shootout over the Barrie Colts in what proved to be both goaltenders’ last Battalion appearance.

“Dennis is technically a very good goalie, but I don’t know if physically he’s ready to play at this level,” said Butler. “The guys go harder to the net over here than they do in Europe, and I think at times he found that part of the game really tough.”

St. Jacques, who has played 111 OHL games over four seasons, three with the Storm and one with the Sault Ste. Marie Greyhounds, was signed from the Guelph Gryphons of Ontario University Athletics. An overage spot became open Nov. 22 when left winger Sean Jones was traded to the Kingston Frontenacs.

Left winger Stephon Thorne and right winger Scott Tanski are the other overagers on a 21-man roster that numbers 13 forwards, six defencemen and the two new goaltenders.

Troops tap Outwater, others
1 week ago

Battalion set to select
1 week ago