Troops dig ‘too big a hole’ 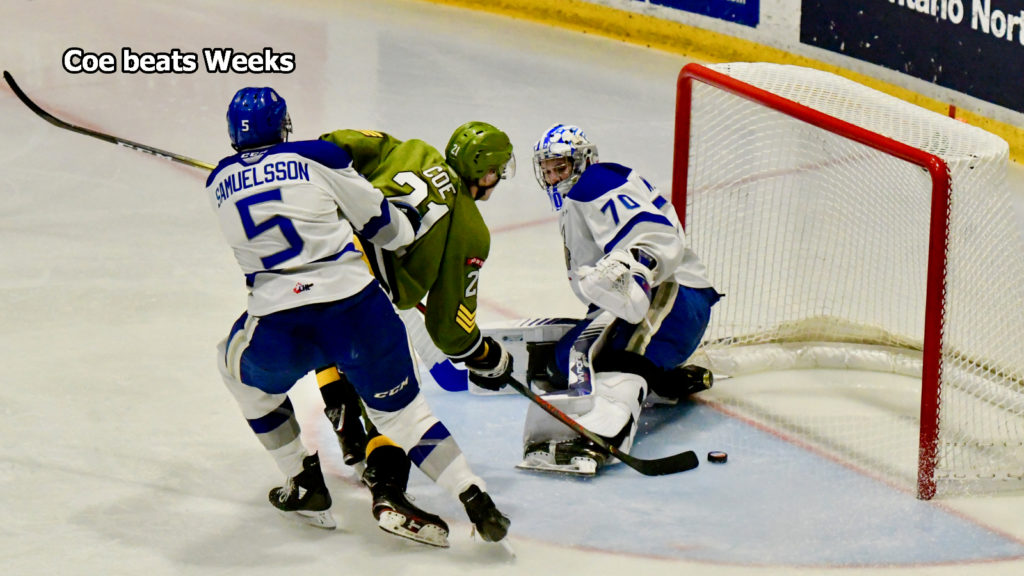 Macauley Carson also provided two goals, Matej Pekar had one goal and two assists, Brad Chenier recorded one goal and one assist and Owen Robinson and Blake Murray also scored for Sudbury, which has a won-lost-extended record of 23-20-1 for 47 points atop the Central Division. Goaltender Mitchell Weeks made 38 saves for the Wolves, who forged period leads of 4-1 and 7-3.

Chenier faced his former teammates for the first time since a Jan. 9 trade that saw Shane Bulitka join the Battalion from the Wolves. Chenier completed a three-game suspension when the teams last met, an 8-2 win for Sudbury on home ice Jan. 10. Pekar had five assists in that game.

Simon Rose had one goal and one assist for North Bay, 10-31-2 for 22 points, fifth in the division. Mason Primeau, Brandon Coe and Mitchell Russell also scored, while Kyle Jackson contributed three assists. Goaltender Cameron Lamour faced 44 shots before a Memorial Gardens crowd of 2,165.

The teams opened a home-and-home series that ends with the rematch at Sudbury at 7:05 p.m. Friday.

“We dug ourselves too big a hole,” said interim coach Ryan Oulahen, whose Battalion trailed 2-0 before recording its first shot. “I don’t know why we continually put ourselves in this scenario but, as the game went on, there were times when we had some push back and it looked like we were crawling back into it, and a mental error killed those spurts for us time and time again.”

Robinson opened the scoring at 3:03 of the first period, rushing down the left wing and putting the puck past Lamour from a sharp angle to the goaltender’s right. Carson connected at 9:53 when he wheeled counterclockwise behind the net, drawing the chasing Lamour out of position, and sent the puck out front, where it went off the right leg of defender James Mayotte into the vacant net.

The Battalion hadn’t recorded a shot before Kalle Loponen was sent off for interference at 10:17. By the time the man advantage came to an end, the Troops had seven shots, with the last beating Weeks as Rose hammered the puck between the goaltender’s pads from the right-wing circle at 12:09. Alex Christopoulos and Jackson earned assists on defenceman Rose’s second goal of the season.

Chase Stillman broke into Battalion territory and dropped the puck to a trailing Hutcheson, who slipped a backhander between Lamour’s legs at 18:25, and Murray ripped home a wrister from the left circle at 19:34. Chenier earned his first point in four games with Sudbury with an assist.

Penalty killer Carson struck for what proved to be the winner at 1:45 of the second period. Lamour went to the side boards in an attempt to clear the puck, which hit the Battalion’s Luke Moncada and slid to Carson, who fired it into the gaping net as Lamour tried to dive back into the crease.

North Bay scored on the power play at 2:05 as Primeau jammed home a Jackson rebound. Liam Arnsby earned the second assist on Primeau’s ninth goal. Coe then drove to the net and buried a Rose feed to pull the Troops within 5-3 at 3:19. Mayotte also assisted on Coe’s 16th goal.

Hutcheson cashed the rebound of a Jack Thompson shot on the power play at 7:30, and Pekar scored at 14:54 when his shot from the right circle hit the right post before going off Lamour and trickling across the goal line.

Chenier collected his 20th goal, after 19 with North Bay, on the power play at 3:27 of the third period, finishing off a passing play with Pekar and David Levin, who drew his second assist.

Russell beat Weeks to the stick side from the high slot at 10:38 to complete the scoring. Rookie Jackson had the lone assist for his first three-point game in the OHL.

The game at Sudbury can be seen live in North Bay on YourTV Channels 12 and 700 and heard on Country 600 CKAT.

BATTALION BULLETS: Bell Let’s Talk Night featured an information booth for Bell Let’s Talk Day next Wednesday, with the first 2,000 fans to arrive receiving a toque. There also were Bell hand-clappers and other gifts. In a pregame ceremony, the West Nipissing Suicide Prevention Task Force received a $20,000 cheque from the Bell Let’s Talk Community Fund to support the Connecting Generations Program. In addition, the North Bay Regional Health Centre provided information about the Child and Adolescent Mental Health Unit, a six-bed unit dedicated to the mental health of youth … Chenier, who was the Battalion captain when traded, ranks 14th in career franchise scoring with 154 points, on 73 goals and 81 assists, in 241 games … Defenceman Pacey Schlueting played his 100th game since the Battalion took him in the first round of the 2018 OHL Priority Selection from the North Bay Trappers minor midgets … The Battalion was 2-for-3 on the power play. Sudbury went 2-for-4 … With each team dressing 11 forwards and seven defencemen, North Bay was without Josh Currie, David Campbell and Nick Grima, while among the missing for Sudbury was Quinton Byfield, who was sick … In five games against North Bay, Levin has three goals and seven assists for 10 points … In five games against the Troops, Carson has five goals and four assists for nine points.