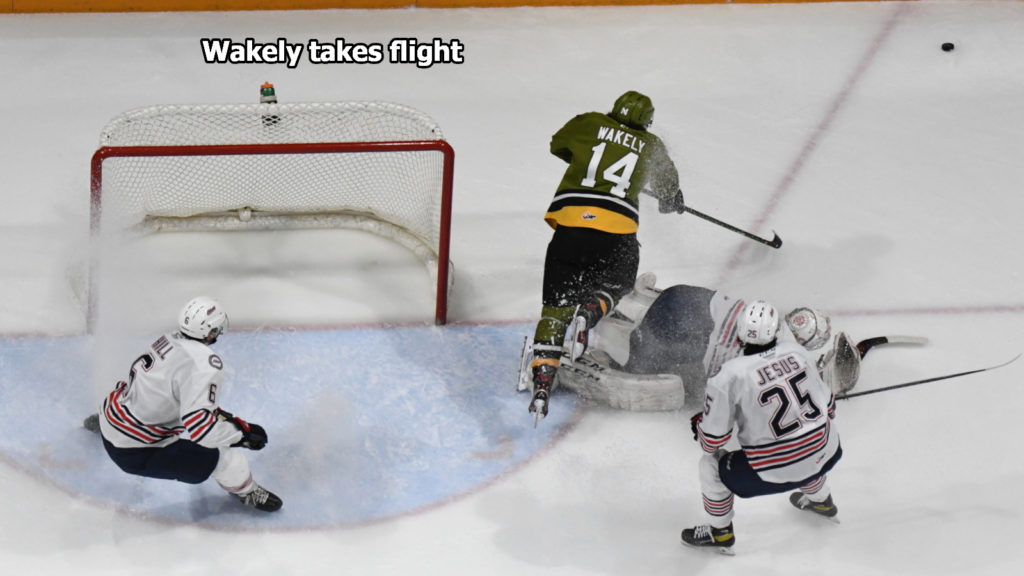 Tnias Mathurin and Matvey Petrov each had one goal and one assist and Dalyn Wakely also scored for North Bay, which improved its won-lost-extended record to 11-6-1 for 23 points atop the Central Division and Eastern Conference.

Brandon Coe, who had two assists, leads the league in both points with 30 and assists with 23. Rookie goaltender Dom DiVincentiis faced 26 shots before 4,160 at the Tribute Communities Centre.

Ryan Gagnier and Calum Ritchie scored for Oshawa, 7-6-3 for 17 points, fourth in the East Division. Goaltender Patrick Leaver made 34 saves.

The teams traded goals in a fast-paced first period that featured plenty of chances at both ends. Gagnier opened the scoring at 7:41 when he swept a pass from Dawson McKinney past DiVincentiis’s glove.

Mathurin replied at 19:25 as his shot from the left-wing circle beat Leaver low to the blocker side. Jackson and Paul Christopolous assisted on rookie defenceman Mathurin’s second goal of the season.

The Troops held a 13-11 edge in shots in the frame. Penalty killer Mitchell Russell was foiled on a breakaway in the ninth minute, and Leaver was tight to the post to deny a net rush off the wing by Coe in the 13th. Leaver turned away a Mathurin drive from the deep slot seconds later. Oshawa’s Ryan Stepien drilled the puck off the left post in the 11th minute, and DiVincentiis stopped Ritchie in close in the 18th.

The Battalion took the lead at 8:45 of the second period. Mathurin’s drive from the slot missed the net, but Wakely was stationed at the lip of the crease to collect the puck and steer it around Lever. It was rookie Wakely’s seventh goal.

Ritchie tied it 2-2 on the power play at 12:37, converting the rebound of Ty Tullio’s shot from the top of the right circle, but Jackson put the Troops ahead to stay when he drove to the net and buried a pass from behind the goal line from Petrov. Coe also assisted on Jackson’s 11th goal.

North Bay outshot Oshawa 14-6 in the period but was unable to generate a good scoring chance during a two-man advantage lasting 1:25. DiVincentiis fought off rising drives off the left wing by McKinney and Luca Marrelli.

The Battalion had the best of the chances early in the third period, but Leaver sprawled to deny Coe off the right wing and reacted quickly to snare a followup drive from Avery Winslow.

Leaver left for a sixth skater with 1:21 to play, and Petrov escorted the puck to the empty net at 18:50. Coe earned the lone assist on Petrov’s team-leading 13th goal.

The Battalion plays host to the Niagara IceDogs at 2 p.m. Sunday on First Responder Appreciation Day.

BATTALION BULLETS: It was the second of four games between the teams, after Oshawa won 3-2 at North Bay on Oct. 28 as Ritchie scored the deciding goal on the power play at 19:17 of the third period. They meet Dec. 31 at Memorial Gardens to open a home-and-home series … Coe has a seven-game assists streak in which he has earned 13 assists. In 206 career games, Coe has 59 goals and 88 assists for 147 points, one more than Chris Rowan and 19th in franchise history. The Battalion picked Coe third overall in the 2017 OHL Priority Selection from the Toronto Nationals minor midgets … DiVincentiis was backed up by Joe Vrbetic, who posted shutouts in the previous two games, a 4-0 win over the visiting Sudbury Wolves last Sunday and a 3-0 victory Thursday night over the Ottawa 67’s at North Bay. Vrbetic, a second-round pick, 31st overall, in the 2018 Priority Selection from the Don Mills Flyers minor midgets, has four career shutouts, the first two registered in 2019-20 … The Battalion went 0-for-4 on the power play. Oshawa was 1-for-3 … Battalion captain Liam Arnsby turns 18 on Saturday … North Bay was without Cam Gauvreau and Nic Sima … Oshawa was without skaters Luke Torrance, Andrew Whitton and Riley Pitt, although Ritchie originally wasn’t listed in the lineup. Ritchie took warmup as a 21st man in uniform and played, while Whitton stepped aside … Mike Marley and Sean Reid were the referees.