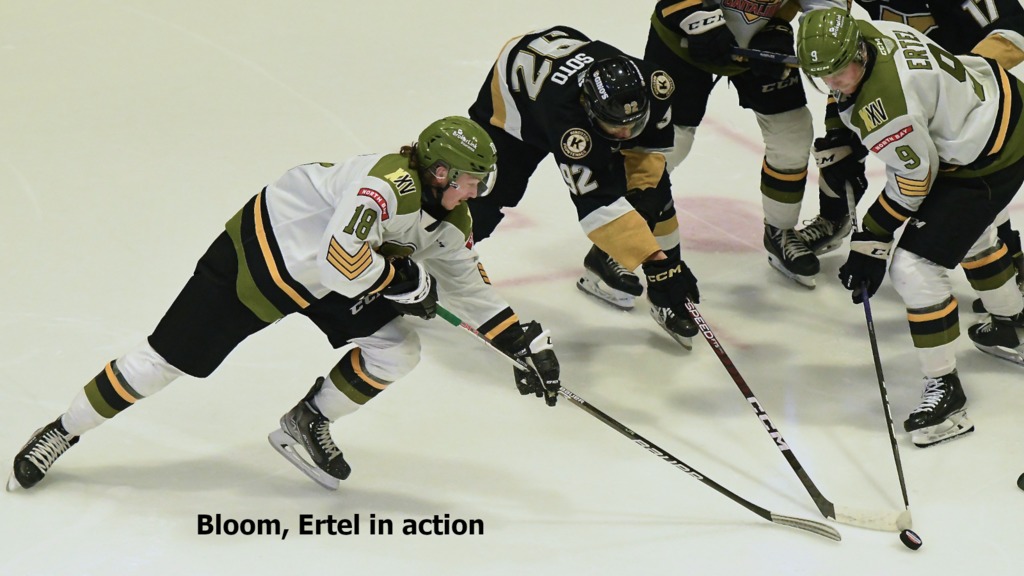 Justin Ertel contributed one goal and three assists and Ty Nelson had one goal and two assists for North Bay, which improved its won-lost-extended record to 13-5-0 for 26 points, two more than the second-place Mississauga Steelheads.

Josh Bloom scored one goal and added an assist in his Battalion debut after arriving in a trade Wednesday from the Saginaw Spirit, while goaltender Dom DiVincentiis provided 18 saves in earning his 11th win, tops in the league.

Brayden Hislop, acquired in the same trade, earned an assist in a stellar debut on the blue line before a Memorial Gardens crowd of 2,193.

Maddox Callens and Francesco Arcuri scored for Kingston. Goaltender Mason Vaccari faced 41 shots from the energized Troops as the Frontenacs slipped to 9-9-2 for 20 points, third in the East Division.

Jackson completed his three-goal performance at 10:49 of the final period, backhanding home the puck to convert a Nelson slap shot, with Ertel also assisting on Jackson’s team-leading 10th goal of the season, which gave the Troops a 5-2 lead.

It was the first three-goal regular-season output by a member of the Battalion since Jackson tallied three times in a 9-2 win over the visiting Sudbury Wolves last March 3. He scored four goals in a 6-3 verdict May 10 at Kingston in Game 3 of a five-game Eastern Conference semifinal victory.

Ertel completed the scoring with his sixth goal on the power play at 13:29 on assists by Bloom and Nelson, taking a crosschecking penalty immediately after the goal for downing Quinton Burns, who was assessed a double roughing call while the Battalion’s Matvey Petrov drew a roughing minor.

Tied 1-1 after 20 minutes, the Battalion took the lead when Nelson drilled the puck past Vaccari at 1:38 of the second period on assists by Ertel and Hislop. It was defenceman Nelson’s seventh goal.

Jackson drove to the net off the left wing past Vann Williamson to score what proved to be the winner at 9:31 off Ertel’s feed, with Petrov also assisting.

Bloom took a pass from Ethan Procyszyn on a two-on-one rush and, gauging the shot, beat Vaccari to the glove side at 10:42. Also assisted by Nikita Tarasevich, it was Bloom’s eighth goal of the season after he scored seven in 19 games with Saginaw.

Arcuri replied at 16:56, cutting to the net unopposed off the left wing for his team-leading 14th goal.

The Battalion stormed out of the gate, building a 7-1 edge in first-period shots before Wyatt Kennedy went off for hooking at 6:23, putting the Frontenacs on the power play. The Troops finished the frame with a season-high 20 shots to Kingston’s four.

Callens opened the scoring at 10:04, but Jackson responded at 18:21, finishing off a nifty three-way play with Petrov and Tarasevich with a swoop across the goalmouth and a backhanded tuck between Vaccari’s legs.

The Battalion visits the Kitchener Rangers at 7:30 p.m. Friday to open a two-game road trip. The game can be seen live in North Bay on YourTV Channels 12 and 700.

BATTALION BULLETS: Subway presented the Ferris Lions Club Chuck-a-Puck Night, which saw prizes totaling more than $3,000. They included a 65-inch flat-screen television, two tickets to a 2023 game of the National Hockey League’s Toronto Maple Leafs and autographed Battalion items … Owen Outwater, whom the Troops traded to Kingston on Sept. 9 for five OHL Priority Selection picks, made his first return to North Bay with the Frontenacs. In the teams’ first of four meetings, the Battalion won 3-2 via shootout Oct. 7 at Kingston, with Petrov and Jackson the only shootout scorers. Outwater took the second attempt for the hosts … Bloom and Hislop were acquired with a sixth-round OHL Priority Selection pick in 2025 for Nic Sima, Cam Gauvreau and five picks … Petrov has a 15-game points streak, longest in the OHL this season, in which he has seven goals and 13 assists for 20 points … The Battalion went 1-for-3 on the power play. Kingston was 0-for-3 … The Battalion was without Tnias Mathurin, Avery Winslow, Brett Bouchard and Kyle McDonald, who was scratched with back spasms … Tyson Rismond has rejoined the affiliated junior A Powassan Voodoos … In a crackdown, three players, including the Troops’ Jacob Therrien, were assessed misconducts for mouthguard violations … Hillary Brennan and Mike Cairns were the referees. Brennan became the first female to referee an OHL game at North Bay.