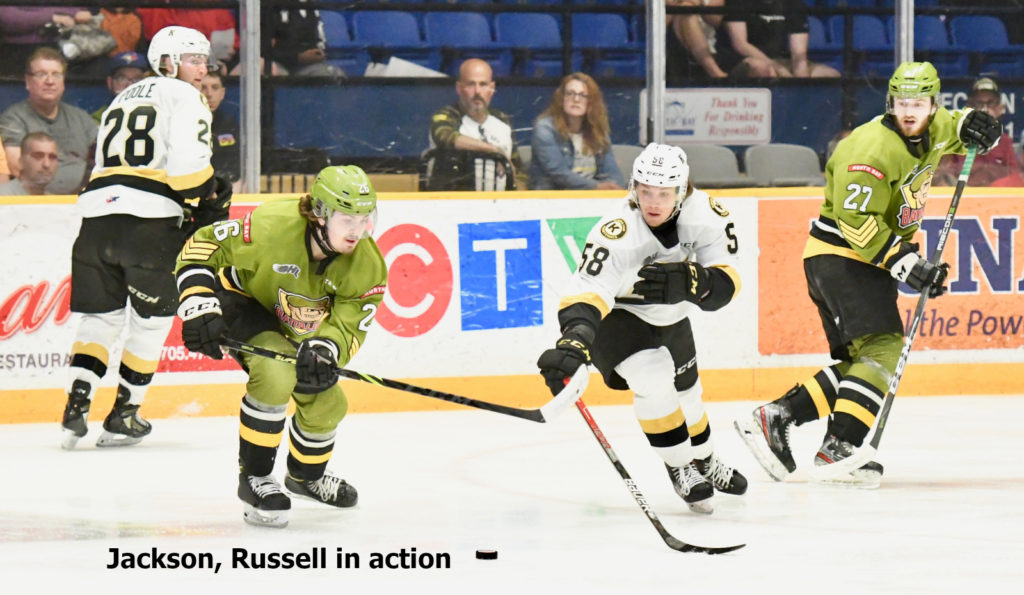 Vrbetic was backed up by Owen Wray, as rookie Dom DiVincentiis, who started the previous two games, and Brandon Coe were scratched with non-covid-related illnesses. Matvey Petrov had two assists skating in Coe’s place with Jackson and Mitchell Russell, who also drew two assists. Liam Arnsby had three in the conference semifinal clincher.

Martin Chromiak scored two goals and Jordan Frasca had one goal and three assists for third-place Kingston. Lucas Edmonds provided one goal and one assist and Shane Wright the other goal. Starting goaltender Leevi Merilainen gave up four goals on 12 shots before being relieved by Aidan Spooner, who surrendered two goals on eight shots before a crowd of 2,806.

The Battalion forged a 5-1 lead through 40 minutes before Edmonds struck 58 seconds into the third period off a back-and-forth play with Frasca. Wright scored his first goal of the series on the power play at 6:02, wiring the puck through a screen from the top of the right circle to pull the visitors within 5-3.

The Troops capitalized after a furious forechecking sequence that covered two shifts when Podolioukh beat Spooner to the far side off a pass from behind the goal line from Dalyn Wakely, with Nikita Tarasevich earning the other assist on Podolioukh’s first playoff goal, what proved to be the winner, at 9:14.

With Spooner gone for a sixth attacker, Chromiak scored two late goals, at 18:53 and 19:39, both assisted by Frasca and Francesco Arcuri, as the Frontenacs emulated their Game 4 finish at home Thursday night, when they netted two goals in the final minute of a 4-3 loss.

McDonald scored the first two goals in a first-period outburst at 5:20 when he took a pass from Arnsby and drove off the right wing to beat Merilainen between the legs. Tnias Mathurin also assisted.

McDonald charged across the blue line past Jake Murray and went in alone to slip the puck between Merilainen’s pads again at 16:53. Owen Van Steensel and Arnsby had assists on McDonald’s sixth goal.

With the teams skating four a side, Christopoulos struck at 18:54 as Arnsby, who raced into the offensive zone to claim the puck on a dump-in, shielded the disc from Alec Belanger and fed the onrushing defenceman on the right wing for his fourth goal. McDonald drew the second assist.

Jackson connected on the power play 55 seconds into the middle period, putting the puck into the near top corner from a sharp angle to Merilainen’s left and ending his night.

Jackson collected another power-play goal, his league-leading fifth, at 6:17. Petrov and Russell assisted on both man-advantage scores by Jackson, who has nine goals in total.

Frasca replied 13 seconds later as the puck skittered across the goal line through a scrum.

Vrbetic had to be sharp early in the first period, denying Arcuri at the crease in the opening seconds, foiling Paul Ludwinski in alone in the third minute and making the stop against Edmonds on a pass from behind the net at 7:06.

BATTALION BULLETS: It was the 21st playoff game between the clubs, the second-most the Battalion has played against an opponent, after 39 meetings with the Barrie Colts. The Troops have faced the Niagara IceDogs 20 times in franchise history … In 14 career playoff games with the Battalion, Russell has 12 goals and 11 assists for 23 points, tied with Kamil Kreps and Mathew Santos for 11th place in franchise annals, while Jackson’s five career power-play goals in eight games are tied with four others for sixth place … Petrov has a six-game points streak in which he has one goal and six assists for seven points … The Battalion went 2-for-4 on the power play. Kingston was 1-for-4 … In addition to Coe and DiVincentiis, the Battalion scratched Grayson Ladd, who left Game 4 with an upper-body injury … Nic Sima played a third postseason game, his first since the last in a sweep of the Ottawa 67’s … Wray played this season with the affiliated junior A Powassan Voodoos of the Northern Ontario Junior Hockey League. He was a 15th-round pick in the 2019 OHL Priority Selection from the North Bay Trappers minor midgets … Kingston scratched Christopher Thibodeau, Duncan Schneider, Mitchell Brooks, Quinton Burns and Maddox Callens … Chromiak scored seven goals in his last six games. He took a game-high eight shots on goal … Dave Lewis and Mike Marley were the referees.