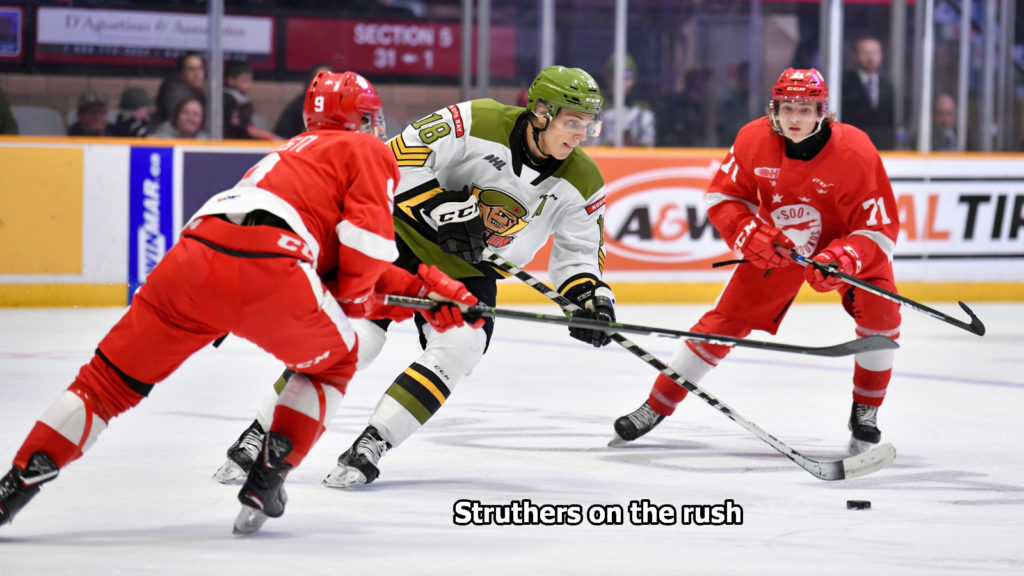 Brandon Coe and Brad Chenier each provided one goal and one assist and Paul Christopoulos and Kyle Jackson, with the winner, also scored for North Bay, which recorded five power-play goals in improving its won-lost-extended record to 3-6-0 for six points, fourth in the Central Division. Goaltender Joe Vrbetic made 28 saves before a crowd of 2,189.

Jaromir Pytlik scored two goals and Jaden Peca, Tye Kartye and Alex Johnston each had one for Sault Ste. Marie, 5-4-0 for 10 points, tied with the Flint Firebirds for third place in the West Division. Goaltender Christian Propp faced 32 shots in his first appearance at North Bay since a June 12 trade to the Greyhounds. He backstopped a 6-4 home-ice win over the Troops on Sept. 21.

“It was an interesting game,” said Battalion head coach Stan Butler. “There were lots of goals. There was lots of excitement for the fans. I can’t ever recall going 5-for-6 on the power play. Every time we win a game, it gives the younger players confidence, and it’s important we get some wins because our schedule doesn’t get any easier.”

The Battalion, which whipped the host Niagara IceDogs 8-2 Saturday night, has scored seven power-play goals in 11 opportunities over the last two games. In their first seven games, the Troops went 4-for-28 with the man advantage.

“We made a decision about a week ago to go with five forwards on the first power play, and we’ll either score or be scored upon, and so far it’s been working our way,” noted Butler.

Kartye tied it 4-4 at 3:58 of the third period off a turnover, charging to the net and chipping the puck past Vrbetic, and Johnston gave the visitors their only lead at 7:43, backhanding a feed from Cole MacKay inside the right post.

Struthers made it 5-5 on the power play at 12:04 when he beat Propp through traffic from just inside the blue line, with assists by Mitchell Russell and Mason Primeau.

Jackson scored the winner at 15:41, stuffing a loose puck under the seated Propp. Primeau and Ryan Thompson, with his first OHL point, earned assists on Jackson’s first goal of the season.

After Propp left for a sixth skater, Struthers hit the empty net at 18:38. The unassisted goal was his team-leading fifth.

North Bay struck for two power-play goals in the first period, sparked by Coe, who swept a Russell feed between Propp’s pads from the lip of the crease at 1:57. Struthers also assisted on Coe’s third goal.

Christopoulos made it 2-0 at 10:02, blasting a man-advantage drive from the left circle past Propp, who may have been screened by Luke Moncada and others. Liam Arnsby and Moncada earned assists on defenceman Christopoulos’s second goal.

Pytlik replied at 15:11, lofting a shot from inside the blue line that appeared to change direction, and Peca knotted the game 2-2 at 3:55 of the second period when he split defenders in the mid slot and went in alone on Vrbetic.

The Battalion connected on the power play at 10:10 when Chenier whipped a Struthers pass between Propp’s pads from the right circle. Coe contributed the other assist on Chenier’s third goal.

Pytlik responded on the power play 1:11 later, finishing off a backdoor play at the right post and prompting a long review to consider the possibility that the play was offside.

Struthers put the Troops in front 4-3 with a power-play goal at 19:51, just 10 seconds after Jacob LeGuerrier went off for crosschecking. Struthers ripped a low shot off the right wing between Propp’s legs. Chenier claimed the lone assist.

The Battalion faces the Saginaw Spirit at 7:05 p.m. Friday to open a three-game road trip that kicks off five consecutive away dates.

BATTALION BULLETS: The Battalion has an all-time record of 14 wins and eight losses, including three in extended time, on Thanksgiving Day. The Toronto St. Michael’s Majors provided the holiday opposition eight times before visiting Brampton three times as the Mississauga St. Michael’s Majors and Brampton and North Bay once each as the Steelheads. Niagara has made three holiday visits, the Sudbury Wolves and Peterborough Petes two apiece and the Barrie Colts one. The Troops are 5-2-0 at North Bay on the holiday. The Thanksgiving attendance record is 3,561, set Oct. 13, 2014, at Memorial Gardens for a 4-1 win over Barrie … Tim Hortons sponsored the game, providing prizes that included coffee for a year for a season ticket holder, prepaid product cards and hockey cards … Chenier has an eight-game points streak during which he has three goals and seven assists for 10 points and a six-game assists streak in which he has six assists … Struthers has four goals and five assists for nine points in the last three games … The Troops last scored as many as four power-play goals in a game on Dec. 6, 2014, in a 5-4 road loss to the Windsor Spitfires … The Greyhounds went 1-for-4 on the power play … The Battalion scratched James Mayotte, Simon Rose, Nick King and Alex Christopoulos … Josh Currie, normally a left winger, opened the game on the blue line.