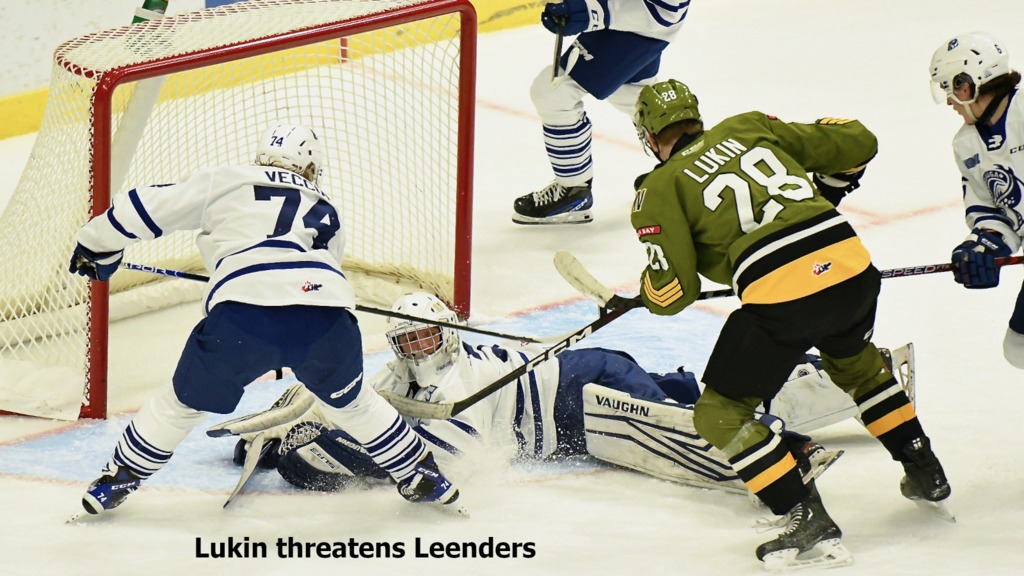 MISSISSAUGA, Ont. — Josh Bloom scored two goals to pace the North Bay Battalion to a 5-2 victory Friday night over the Mississauga Steelheads in a battle of the top two teams in the Ontario Hockey League’s Central Division.

Nikita Tarasevich, Anthony Romani and Alexander Lukin each had a goal, while Matvey Petrov contributed three assists and Ty Nelson and Kyle Jackson two apiece as North Bay improved its won-lost-extended record to 19-8-1 for 39 points atop the division.

Luca DelBelBelluz and William Eggleton scored for Mississauga, which got 29 saves from goaltender Ryerson Leenders in slipping to 13-11-3 for 29 points.

Tarasevich struck first for his seventh goal of the season at 14:00 of the opening period. Petrov seized the puck at the Battalion blue line and dashed down the left wing, eying Tarasevich all the way before centring the disc to him past defender Mason Zebeski for the conversion.

Romani doubled the lead 54 seconds later, taking a pass from behind the net from Nelson and depositing the puck inside the right post. Wyatt Kennedy had the other assist on Romani’s eighth goal.

Nelson broke his stick while killing a bench minor for too many men on the ice at 17:53, and Mississauga applied heavy pressure, with Nelson suffering a facial injury when he was struck in a traffic jam in front of the net, eliciting a whistle but without a penalty for removing his helmet.

Lukin, who crashed the crease earlier without scoring, connected at 13:30, seconds after DiVincentiis stoned Zander Veccia at pointblank range. Lukin went to the slot to tip Paul Christopoulos’s right-point shot, with Petrov also assisting on the defenceman’s third goal, the eventual winner.

Bloom one-timed home a cross-ice pass from Jackson on the power play at 16:19, with Nelson drawing the other assist.

Ethan Procyszyn was issued a double minor for high-sticking at 16:31 and Bloom went off for high-sticking at 19:19, giving Mississauga a two-man advantage for 1:12, but penalty killer Owen Van Steensel came closest to scoring, racing away to put a backhander just wide of the right post with two seconds left in the frame.

DelBelBelluz scored on the power play at 1:11 of the third period, ending a DiVincentiis shutout string of 120:41. DiVincentiis, who blanked the host Peterborough Petes 3-0 last Saturday night, previously gave up a goal 30 seconds into the third period of a 4-2 road win over the Kingston Frontenacs the night before.

Bloom redirected a Jackson shot taken from high on the right wing on the power play at 16:12 to make it 5-1. Petrov also assisted on Bloom’s 15th goal, his eighth since a Nov. 16 trade from the Saginaw Spirit.

Rookie Eggleton collected his first OHL goal at 19:18, taking advantage of an open net when DiVincentiis was caught trying to play the puck on the end boards.

The Battalion hosts Saginaw at 2 p.m. Sunday in the only scheduled visit to North Bay of Michael Misa, the No. 1 pick in the OHL Priority Selection in April who received an exemption from Hockey Canada to play in the league at 15 and who leads rookies in scoring.

BATTALION BULLETS: It was the teams’ first of six meetings, with the second set for Thursday night at Memorial Gardens … The Battalion’s Luc Brzustowski, playing his second game since a trade from the Soo Greyhounds, saw no action after being clipped in the head by a Mississauga skate in the first period … Jackson has an eight-game points streak in which he has six goals and eight assists for 14 points … Bloom has a six-game points streak during which he has seven goals and four assists for 11 points. He has 16 points in 11 games since the trade … The Battalion went 2-for-6 on the power play. Mississauga was 1-for-7 … The Battalion, which dressed 11 forwards and seven defencemen, was without Tnias Mathurin, Jacob Therrien, Avery Winslow, Kyle McDonald and Brett Bouchard … Among the missing for Mississauga were Jake Uberti, Ethan Del Mastro and Owen Beck, the last two of whom were at the opening Friday of Canada’s national junior team selection camp at Moncton, N.B., in preparation for the 2023 World Junior Championship. The tournament, which is to be played at Halifax and Moncton, starts Dec. 26 … Battalion players will assist One Kids Place North Bay in preparing and serving breakfast at 400 McKeown Avenue at 9:30 a.m. Saturday. Tickets at $2.50 can be purchased there. Players will be available for photographs and autographs.