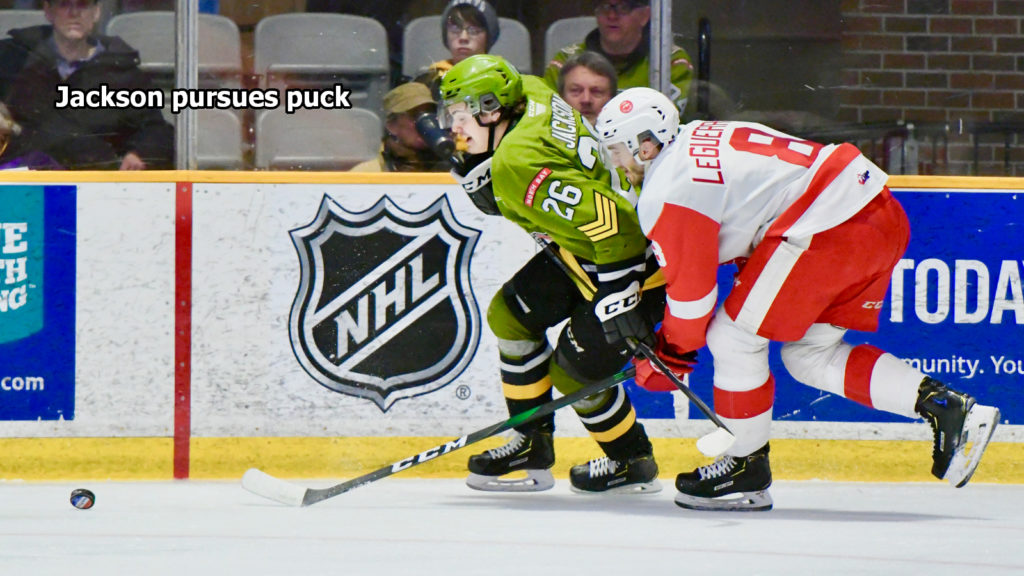 “It’s not going to be easy,” Oulahen said of the Battalion’s home date at 7 p.m.

Guelph, with a won-lost-extended record of 22-18-5 for 49 points, fourth in the Ontario Hockey League’s Midwest Division, has dropped its last 10 games, all in regulation time, since a 5-2 home-ice verdict Jan. 3 over the Peterborough Petes.

But the Storm recorded 10 straight wins from Oct. 23 through Nov. 22, the second in the streak being a 9-3 conquest of the visiting Battalion on Oct. 25, in which Kyle Jackson and Mason Primeau each had a goal and an assist and Luke Moncada the other goal for North Bay.

“Everybody in the league right now is fighting for something,” noted Oulahen, who pointed to the National Hockey League Draft, a professional contract, increased ice time and a spot on the roster next season as among the motivating factors for the Troops, the youngest team in the OHL.

And while the Battalion is 11-32-2 for 24 points, last in the Central Division, Eastern Conference and league, Oulahen alluded to a possible playoff berth if the team continues to “chip away.”

North Bay visits the Mississauga Steelheads on Friday night and plays host to the Kingston Frontenacs on Sunday. While Mississauga has gone 7-2-0 in its last nine games and is second in the division, Kingston is 14-26-4 for 32 points, fifth in the East Division and ninth in the conference, making it the Troops’ primary target.

The Battalion, 6-9-2 in the quarter-season since Oulahen took over the bench from Stan Butler, is 2-2-0 in its last four games, including the first back-to-back road wins of the season, 3-1 over the Niagara IceDogs on Jan. 18 and 4-2 over the Sudbury Wolves last Friday night.

“We really like two out of the four,” Oulahen said of the most recent results. “We feel like our starts at home haven’t been great, and we want to change that tomorrow.”

In its last game, the Battalion lost 6-4 Sunday to the visiting Sault Ste. Marie Greyhounds, ceding a 2-0 lead in the first 20 minutes before, Oulahen suggested, carrying the play over the final 40.

“We haven’t followed up a really strong outing with a big game the next day,” allowed Oulahen, who said consistency, including from period to period and shift to shift, has eluded the Troops too often.

In that context, he pointed to Shane Bulitka, a centre and left winger acquired Jan. 9 from Sudbury when left winger Brad Chenier went the other way in a swap of overage captains, as a valuable addition.

“He does not stop — games, practices — he’s a driving force. We absolutely love what he does. He may be a sneaky addition in terms of what he shows the young players.”

The Guelph game marks Bruce Power Night, in partnership with the Brain Tumour Foundation of Canada, which works on behalf of those affected by the 120 types of brain tumours.