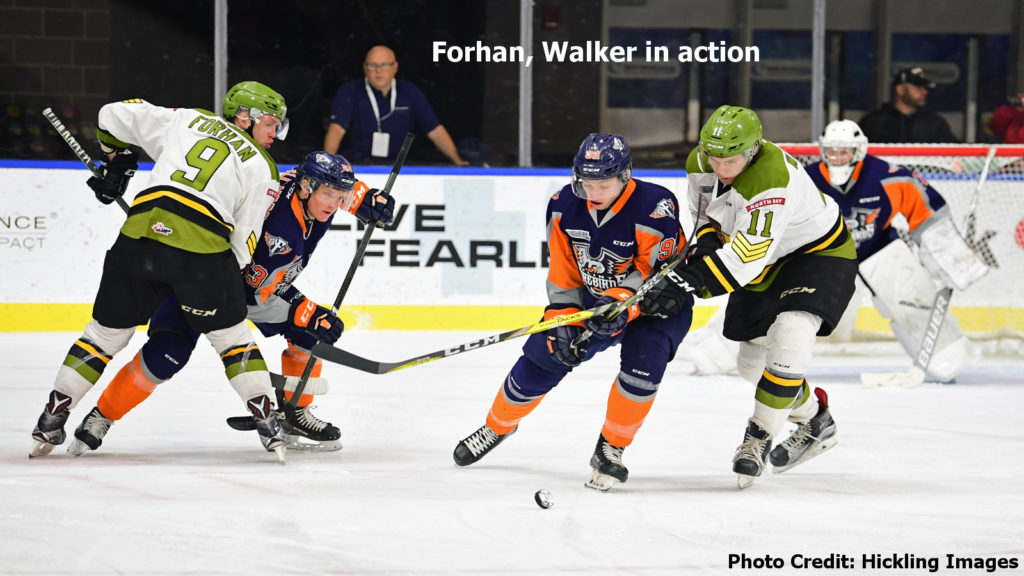 BUFFALO, N.Y. — Brett McKenzie and Daniel Walker each scored one goal and added an assist to power the North Bay Battalion to a 6-1 Ontario Hockey League exhibition victory Sunday over the Flint Firebirds.

Justin Brazeau, Cam Dineen, Alex Robert and Luke Burghardt also scored for the Battalion, which earned its second victory in three games as it wrapped up its OHL Pre-Season Showcase schedule at HarborCenter.

Starting goaltender Mat Woroniuk made 16 saves before giving way to Julian Sime at 9:26 of the second period. Sime allowed the lone Flint goal on 18 shots.

Robert poked the puck home at 2:07 of the third period after Brad Chenier, who had two assists, hit the left post, giving the Battalion a 4-0 lead before defenceman Nilsen scored from wide on the left wing during a two-man advantage at 10:20.

Walker struck unassisted during a two-man advantage at 13:30, and Burghardt collected his second goal of the preseason on assists by Brady Lyle and Walker to complete the scoring at 14:19.

Dineen and McKenzie scored unassisted goals, the first of the six-team Showcase for each, 1:14 apart in the second period to post the Battalion to a three-goal lead.

Defenceman Dineen made a solo sortie into Flint territory and connected on a snap shot from the left faceoff circle at 9:42. Just 25 seconds after the Battalion was called for too many men on the ice, penalty killer McKenzie broke in alone on Cavallin, outwaited the goaltender and slipped home a backhander at 10:56.

Brazeau, scoring for the third straight game, gave the Troops a 1-0 lead at 11:44 of the first period. Chenier fired the puck from the top of the right-wing circle and it bounced into the crease, from where Brazeau knocked it behind Cavallin. McKenzie had the other assist.

The Battalion failed to score on three first-period power plays, including a two-man advantage lasting 28 seconds. Chenier hit the left post with Jack Phibbs off for tripping early in the frame, in which North Bay had a 15-8 shots advantage.

Woroniuk used his right pad to deny Jake Durham on a pointblank blast in the fifth minute and got the glove on a Jack Wismer drive in the 18th. Woroniuk produced a solid left-pad save against Ty Dellandrea, attempting to convert his own rebound, in tight in the second minute of the middle period.

The Battalion plays its fourth of six preseason games on Wednesday, Sept. 13, when it visits the Sudbury Wolves at 7 p.m.

BATTALION BULLETS: Opening lines featured Adam McMaster centring McKenzie on left wing and right winger Brazeau, Kyle Potts centring left winger Luke Moncada and right winger Brandon Coe and Burghardt pivoting left winger Chenier and right winger Robert. Rhys Forhan centred left winger Walker and right winger Andy Baker … Defence pairings were Jesse Saban with Payton Vescio, Dineen with Travis Mailhot and Eric Allair with Lyle … The Battalion, with 24 players on the trip, scratched Simon Rose, Kurtis Evans, Patrick Brown and Daniil Vertiy. Jacob Ball and captain Riley Bruce, both recovering from injuries suffered last season, and Adam Thilander, who’s been at camp with Sweden’s national junior team, weren’t in attendance. Thilander was expected to arrive at North Bay on Sunday night … Woroniuk backstopped a 4-3 victory via shootout Friday over the Kitchener Rangers, while Sime staffed the crease in a 4-3 loss via shootout Saturday to the Windsor Spitfires, reigning Memorial Cup champions … Dineen wore the captain’s ‘C’ as he did Friday, with Brazeau and Potts serving as alternates … Among the scratches for Flint, which dressed 19, one below the limit, were Maurizio Colella and Max Kislinger, former members of the Battalion … North Bay went 1-for-5 on the power play. Flint was 1-for-6.