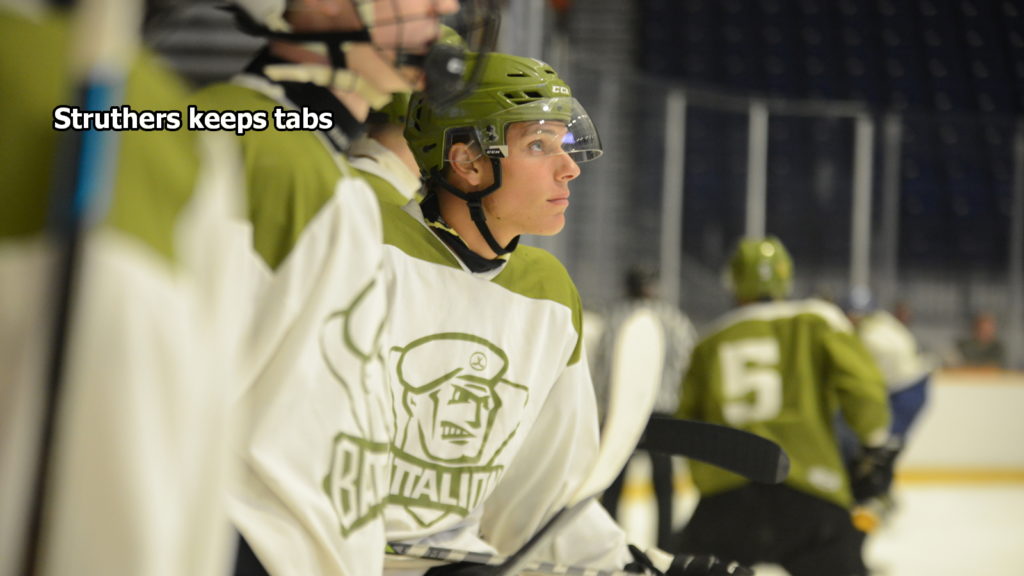 NORTH BAY, Ont. — Forty-five players hit the ice Monday for the first intrasquad game of the North Bay Battalion’s training camp, the Ontario Hockey League club’s seventh in the Gateway of the North.

All but one of the camp participants were chosen by the Battalion in various OHL Priority Selections, OHL Under-18 Priority Selections and the Canadian Hockey League Import Draft or acquired in trades. The only free agent is forward Austin Baker of Pendleton, Ind., who played last season for the Indy Jr. Fuel midget under-18s.

Czech defenceman Martin Hugo Has, the Battalion’s first-round pick in the CHL Import Draft in June, was not in attendance and continues to consider playing in Finland. Finnish forward Niki Korpialho, the Troops’ second-round selection, took part in the first of four intrasquad games.

“I thought, for the first scrimmage, that the pace was good,” said Stan Butler, director of hockey operations and head coach.

Team Green defeated Team White 6-3 in the intrasquad outing, which followed a practice for each lineup. Devon Savignac’s third-period goal gave Green a 4-2 lead and proved to be the winner. Green held a 41-28 edge in shots on goal.

Coaches Adam Dennis and Scott Wray ran the Green and White benches respectively as Butler watched the three 25-minute periods from the stands.

Each of six goaltenders played one period, with Green’s Christian Cicigoi allowing one goal on nine shots, Reece Proulx one goal on 12 shots and Owen Wray one goal on seven shots. White’s Christian Purboo surrendered two goals on 16 shots, Joe Vrbetic one goal on 13 shots and William Nguyen three goals among 12 shots.

The camp, which opened Sunday with fitness testing and medicals, continues with intrasquad games at 9 a.m. and 4 p.m. Tuesday. They are open to the public at no charge. A final intrasquad game follows at 9 a.m. Wednesday.

Brad Chenier and Kyle Jackson scored goals to post Green to a 2-1 lead after the first period, and David Campbell had the winners’ lone second-period tally.