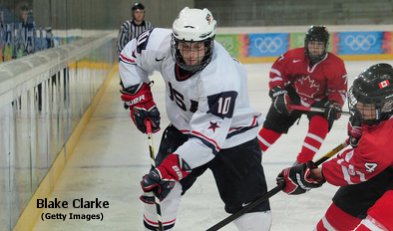 Clarke, a six-foot-two, 197-pound resident of Wildwood, Mo., was the first of 16 Battalion picks. He recorded one goal and three assists for four points in 13 United States Hockey League games last season.

The first American-based player taken, he started the season with the USHL’s Fargo Force before returning home to play for the Blues.

“I was the only 1996 birth in the USHL at the time,” Clarke said via telephone. “But around Christmastime I decided it was probably best for me to return home so I could get more playing time and more chances to play with the puck.

“That season really prepared me for going up against the older, faster, stronger and tougher players I’ll face in the OHL. I think the OHL is the best place for me to develop. The schedule is very similar to the National Hockey League’s, and the compete level of the players is very high.”

Clarke, who turned 16 on Jan. 24, described himself as an offensive player who has worked hard to develop a defensive game.

“I’m a goal scorer, an offensive forward, but I got a chance to kill penalties last season, which I’d never really done before. I’ve got good hands, good vision and a good shot. I’ll need to work on my skating over the summer.”

Stan Butler, Battalion director of hockey operations and head coach, named nine forwards, five defencemen and two goaltenders, all but one born in 1996, in the 15-round process. Given trades, the Troops exercised 13 of their own picks and three acquired from other clubs.

The Battalion had one choice in each round except the 12th, in which it had two. The 20 OHL clubs, operating via the Internet from remote locations connected to the league office in Toronto, chose a total of 303 players, all born in 1996 or earlier except for the No. 1 overall pick, 1997-born centre Connor McDavid by the Erie Otters.

“Playing major midget this season really helped me,” said the Sault Ste. Marie resident, who turns 16 on May 13. “It showed me what it was like to compete against older players.”

Amadio said he’s a fan of onetime Battalion centre Matt Duchene, a first-round choice in 2007 who starred for the Troops for two years before being taken third overall by the Colorado Avalanche in the National Hockey League’s 2009 Entry Draft.

“I like Duchene’s style of play. He takes care of his own end, but he can really contribute offensively and he really gives his team a spark.”

In the third round, 57th overall, the club tabbed right-shot defenceman Kyle Wood of the Waterloo Wolves minor midgets. Wood, six-foot-two and 175 pounds, recorded 12 goals and 24 assists for 36 points with 70 penalty minutes in 41 games.

A resident of Waterloo, Ont., who turns 16 on May 4, Wood played two regular-season games with the junior B Waterloo Siskins and added two assists in five games in a first-round playoff loss to the Stratford Cullitons.

The Battalion first selected a goaltender in the sixth round, using the 117th overall pick on Jake Kment, a Sault Ste. Marie teammate of Amadio. Kment, six feet and 175 pounds, turned 16 on March 13. A Sault Ste. Marie resident, he appeared in 37 games, producing four shutouts and a 2.11 goals-against average.

With its ninth-round choice, 177th overall, the Battalion tabbed left-shot blueliner Nathan Billitier of the Rochester Stars of the Eastern Junior League. Billitier, five-foot-10, 175 pounds, had two assists in 29 games. The resident of Spencerport, N.Y., turns 16 on May 20.

In the 10th round, 197th overall, left-shot centre Ryan Hitchcock was chosen from the New Jersey Rockets of the Metro Junior League. A five-foot-nine, 155-pound resident of Manhasset, N.Y., Hitchcock recorded 29 goals and 34 assists for 63 points in 29 games. He turned 16 on March 30.

The Battalion’s 11th-round pick, 217th overall, was left winger Drake Board of the Barrie Colts minor midgets. Board, five-foot-seven, 150 pounds, contributed 11 goals and five assists for 16 points in 26 games. The Barrie resident turned 16 on Jan. 8.

The Battalion used its own 12th-round pick, 237th overall, on right-shot defenceman Shawn Tessier of the Markham Majors minor midgets. A Toronto resident who had one goal and two assists for three points in 31 games, Tessier, six feet and 175 pounds, turns 16 on May 10.

The Troops also had the 240th pick, acquired from the Ottawa 67’s, and used it to peg one of Tessier’s teammates, goaltender Eric Pitcher, a Brampton native who turns 16 on June 4. Pitcher, six feet two and 175 pounds, appeared in 23 games, compiling a won-lost record of 13-7 with a 2.74 GAA.

The Battalion’s 13th-round pick, 257th overall, was left-shot defenceman Nick Legault of the Eastern Ontario Wild minor midgets. He had three goals and 11 assists for 14 points with 50 penalty minutes in 27 games. The six-foot-two, 200-pound Ottawa resident turns 16 on Sept. 27.

In the 14th round, at No. 277, the Troops tabbed right-shot centre Jake Coughler of the Brampton Battalion minor midgets. A resident of St. Catharines, the six-foot, 160-pound Coughler scored 12 goals and added 13 assists for 25 points in 27 games. He turns 16 on April 23.

The Battalion exercised its final pick, in the 15th round, 297th overall, on right winger Alex Mutton of the Cambridge Hawks minor midgets. Mutton, six-foot-two and 183 pounds, produced 21 goals and 19 assists for 40 points in 44 games. A native of Kitchener, he turned 16 on Feb. 12.

Erie made McDavid of the Toronto Marlboros minor midgets the top pick. Hockey Canada granted the 15-year-old exceptional player status to enter the OHL a year early. Defenceman Aaron Ekblad received the same status last year and was chosen first overall by the Barrie Colts. Centre John Tavares was the first player to be granted such status, going to the Oshawa Generals with the first pick in 2005.