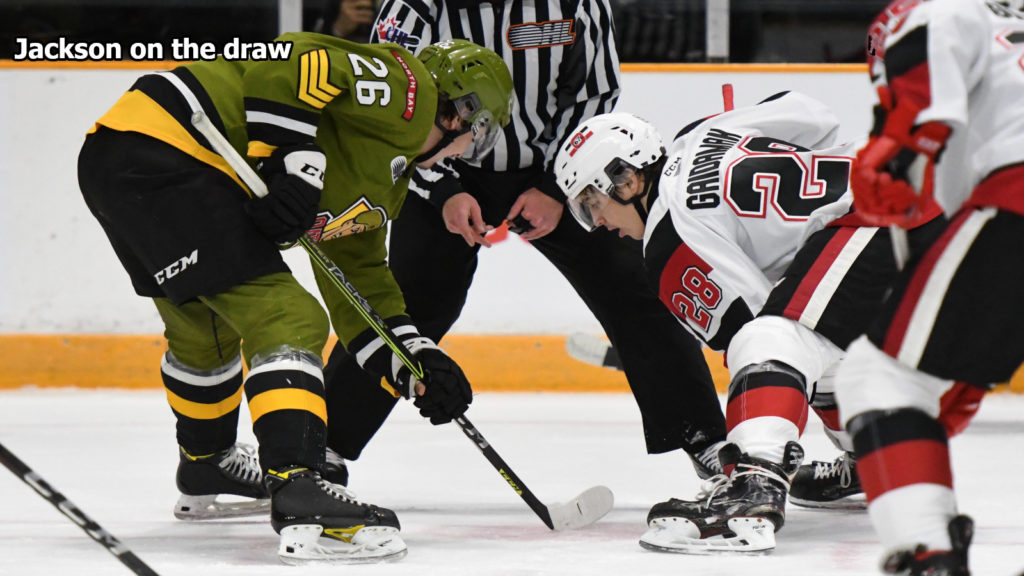 Justin Brazeau scored a league-leading and franchise-record 61 goals in 2018-19, finishing second in points with 113.

In 2008-09, Cody Hodgson tied for fourth in both goals and points with 43 and 92 respectively, while Russian import Evgeny Grachev, tied for fifth in goals with 40, led first-year points producers with 80 and became the last 18-year-old rookie of the year.

But, as the Battalion has forged a won-lost-extended record of 13-7-2 for 28 points atop the Central Division and Eastern Conference, individuals are making their marks in numbers early in this season.

“I think it’s a mixed bag,” said general manager Adam Dennis. “We have a group of good young players, they’re exceeding expectations, and the coaches have given them freedom in the offensive zone.”

Brandon Coe leads the OHL with 39 points on 11 goals and a league-leading 28 assists. He’s on a career-high 11-game points streak in which he has five goals and 18 assists for 23 points, and his concurrent 11-game assists streak is the longest this season.

Kyle Jackson is tied for second in the scoring race with Lucas Edmonds of the Kingston Frontenacs after scoring 14 goals and adding 21 assists for 35 points, all career highs.

Russian import Matvey Petrov, who skates on a line with Jackson and Coe, has a team-high 16 goals and 17 assists for 33 points. Fourth in the league in goals, Petrov is tied with Luke Evangelista of the London Knights for fifth in points.

Ty Nelson, with five goals and 13 assists for 18 points, is tied for third in rookie scoring with Jake Karabela of the Guelph Storm and with Guelph’s Daniil Chayka and Andrew Perrott of the Owen Sound Attack for fifth in scoring by a defenceman.

Mitchell Russell, who has 11 goals and 10 assists for 21 points, is tied with Evangelista for second in shorthanded goals with three.

Dalyn Wakely, with seven goals and two assists for nine points, is in a four-way tie with Guelph’s Matthew Poitras, Owen Sound’s Colby Barlow and Owen Beck of the Mississauga Steelheads for fifth place in goals by a rookie.

Tnias Mathurin, sidelined with a shoulder injury, leads OHL rookies in plus-minus at plus-19 and is tied for third in the league with Mississauga’s Ethan Del Mastro. Defenceman Mathurin has two goals and six assists for eight points.

Collectively, the Battalion has scored 88 goals in 22 games for an average of 4.00 goals per game, which ranks fifth in the league behind the leading Sault Ste. Marie Greyhounds at 4.19, Windsor Spitfires, Kingston and Hamilton Bulldogs.

Not to be outdone, goaltender Joe Vrbetic is 11-2-2 with a goals-against average of 2.59 and two shutouts. He’s second in the league in wins, tied for second in average with London’s Brett Brochu and tied for the lead in shutouts with Mississauga’s Roman Basran.

Vrbetic and Dom DiVincentiis have combined to be charged with 65 goals against in 22 games for an average, including an empty-netter, of 2.96, third in the league behind Mississauga and London.

The Battalion has one other league leader. That’s captain Liam Arnsby, tied atop the penalty minutes list with Arber Xhekaj of the Kitchener Rangers with 45.