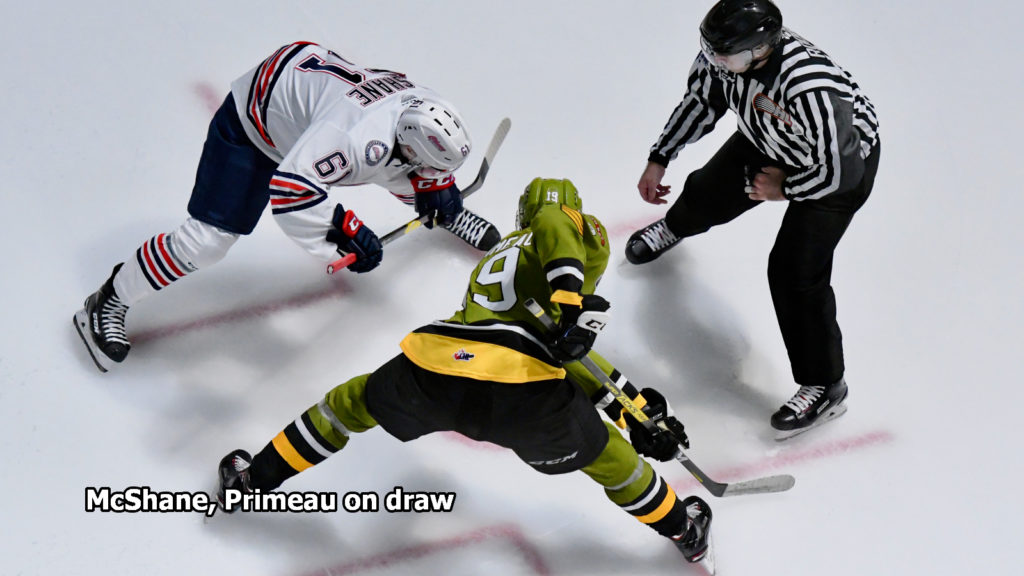 NORTH BAY, Ont. — The host North Bay Battalion faces the Oshawa Generals at 7 p.m. Thursday in the first of three games on the long weekend.

North Bay, with a won-lost-extended record of 1-5-0, visits the Niagara IceDogs on Saturday night before receiving the Sault Ste. Marie Greyhounds on Monday in the traditional Thanksgiving Day matinee. Host Oshawa, 7-0-0 and the league’s only unbeaten team, defeated the Battalion 5-1 last Friday night.

The Battalion may have newly acquired overage defenceman Nick Grima in the lineup against Oshawa for the Pink in the Rink game in support of the Canadian Cancer Society. Grima was acquired in a trade Monday from the Sarnia Sting for a conditional fifth-round pick in the 2022 OHL Priority Selection.

“It wasn’t one of the teams that I heard was interested, but when I found out who it was I was kind of happy,” Grima said Wednesday of the trade to North Bay.

“It’s a little bit closer to home with the teams that they play and stuff, so it was definitely exciting coming here.”

One of five overagers on the Sarnia roster, Grima, a second-round pick in 2015 by the Peterborough Petes from the Toronto Titans minor midgets, had gone home to await developments, as OHL teams can play only three overagers in a game.

“It wasn’t really what I wanted to do, going home for the last week and a half, but basically I wasn’t going to be playing, so I thought it would kind of be better to be with my family for that kind of time.”

He said he looks forward to helping the Battalion, which has the league’s youngest roster.

“This team is a little bit younger, but they definitely have the potential to do something good, and it’s kind of nice to come in in a little bit of an older guy role.”

Grima, who said he didn’t know for sure whether he’ll face Oshawa, suggested he’s ready to contribute at both ends of the ice.

“From what I’m aware, I’m playing Thursday, but that could change. It’s up to the coaches, and I’m just trying to work hard for them right now.

“I try to be a two-way defenceman the best I can. I’m kind of more of a passer and a puck mover defenceman, but in the defensive zone I try to play physical and get the puck out.”

Stan Butler, director of hockey operations and head coach, said the Troops added Grima as a fourth overager to give relief to younger rearguards.

“We’re committed to playing our young players, but we’ve also got to be careful that their development is not being impaired by having them play out of what would be a regular position for a young guy.”

“I think he’s got a little bit more sandpaper than some of our other defencemen have,” Butler noted of Grima.

“He’s a little grittier, but he still has skill and he can move the puck. With so many young guys in the lineup, we need somebody who plays hard.”

Clubs may carry unlimited overagers until Nov. 10, when they must be reduced to four, with the quota going to three Jan. 9, a day before the trade deadline.

Meanwhile, Brandon Coe of the Battalion is one of 41 OHL skaters and goaltenders on the National Hockey League’s ‘Players to Watch’ list drawn up by the central scouting department before actual rankings are compiled in advance of the NHL Draft, scheduled June 26-27 at Montreal.

The Pink in the Rink game, presented by the Canadian Automobile Association, offers a chance to win several prizes, including a suite rental for 14 persons. Members of the North Bay Fire and Emergency Services also will be on hand as part of Fire Prevention Week.

Guskov landed from London
11 hours ago

Nelson signs with Battalion
2 months ago