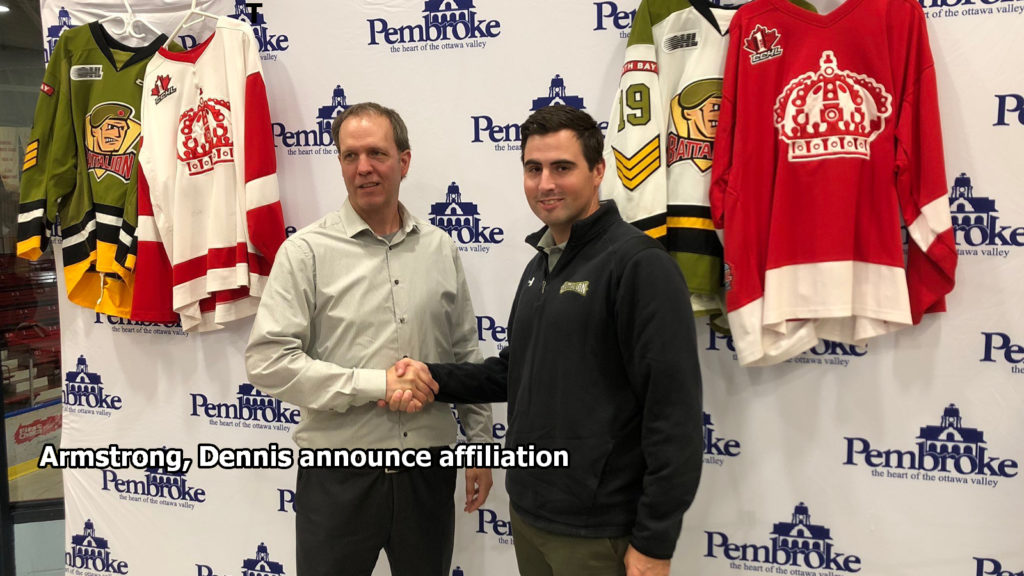 PEMBROKE, Ont. — The North Bay Battalion has reached a player affiliation agreement with the junior A Pembroke Lumber Kings of the Central Canada Hockey League, the clubs have announced.

Adam Dennis, an assistant general manager and coach with the Ontario Hockey League’s Battalion, made the announcement Monday at the Pembroke Memorial Centre with Alex Armstrong, owner of the Lumber Kings.

The Battalion was affiliated with the Powassan Voodoos of the Northern Ontario Junior Hockey League for the last five seasons since the junior A club was established as an expansion franchise.

“We tried to reach an agreement with Powassan but were unable to do so,” Stan Butler, Battalion director of hockey operations and head coach, said near Toronto. “We think we’ve got a suitable arrangement with Pembroke.”

Armstrong said the agreement offers “an opportunity to enhance the Lumber Kings lineup.”

“It will provide our team with access to some great junior hockey players who may not be ready to take a regular shift at the major junior level but could benefit from honing their skills in our league.”

Dennis said that the affiliation will permit the Battalion to monitor the development of players.

“It’s our feeling that the proximity to North Bay and the competitive nature of the CCHL will be a great benefit to the development of our prospects, just as it was last season for Kyle Jackson. We look forward to forging a strong partnership that will be mutually beneficial to both clubs.”

Forward Jackson, who played for the CCHL’s Ottawa Jr. Senators last season, saw action in 12 games with the Battalion, scoring two goals and adding one assist for three points. The Ottawa resident was a third-round pick in the 2018 OHL Priority Selection from the Toronto Red Wings minor midgets.

Pembroke, 150 kilometres northwest of Ottawa, is the largest commercial centre between the Canadian capital and North Bay.

The Lumber Kings are among the oldest members of the CCHL, tracing their history to 1958, before the league’s antecedent was formed in 1961. The club was suspended for the 1979-80 season, when it was replaced by the Pembroke Royals, but rejoined the CCHL the following season.

In 2011, the Lumber Kings became the second CCHL team, after the 1976 Rockland Nationals, who won on home ice, to capture the national championship.

From June, 2006, until May, 2013, the Pembroke club was owned by Sheldon Keefe, who served as coach and general manager. He later joined the Sault Ste. Marie Greyhounds as coach and now holds the same position with the Toronto Marlies, the American Hockey League affiliate of the National Hockey League’s Toronto Maple Leafs.

Among the Lumber Kings’ alumni is forward Dainius Zubrus, who later played with the Metro Junior A Hockey League’s Caledon Canadians, operated by Battalion owner Scott Abbott. The Lithuanian-born Zubrus, selected 15th overall in the 1996 NHL Entry Draft by the Philadelphia Flyers, played for six NHL teams over 19 seasons culminating with the San Jose Sharks in 2015-16, scoring 228 goals and earning 363 assists for 591 points in 1,293 games.

Keefe sold the Lumber Kings to Dale McTavish, who had played for the club in 1988-89 before skating with the Peterborough Petes for four seasons. The centre played nine NHL games with the Calgary Flames in 1996-97, scoring one goal and adding two assists for three points.

Armstrong, who will fill the roles of general manager and coach, bought the franchise from McTavish in June after coaching the CCHL’s Smiths Fall Bears last season.

Scott Wray, a onetime member of the OHL’s North Bay Centennials, served as the Voodoos’ coach for their first three seasons through 2016-17, when they won the NOJHL championship. Wray then joined the Battalion as an assistant coach.