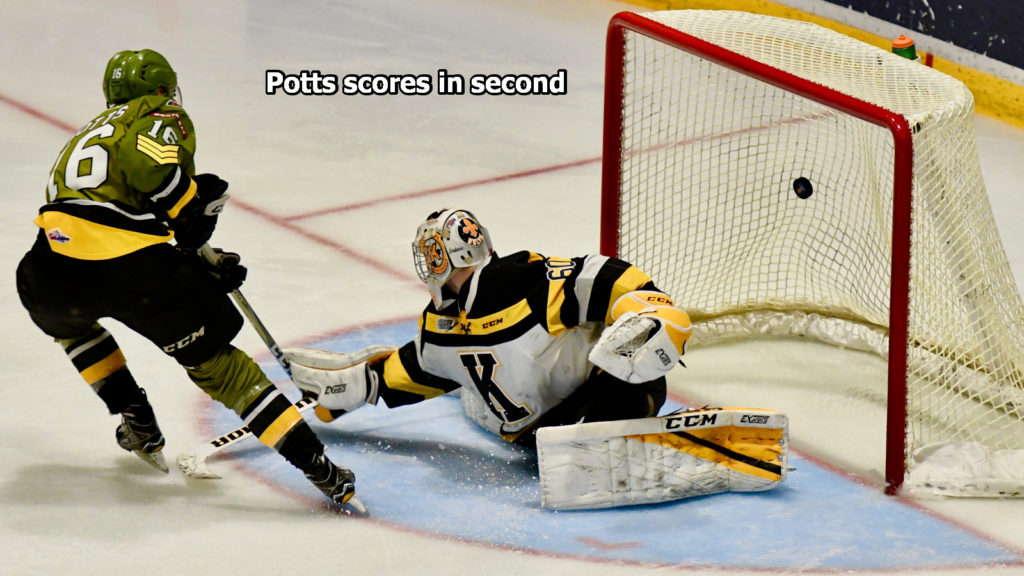 NORTH BAY, Ont. – Cliff Pu scored two goals and added one assist to pace the Kingston Frontenacs to a chippy 6-3 Ontario Hockey League victory Thursday night over the North Bay Battalion, giving Kingston a lead of three games to one in their best-of-seven Eastern Conference quarterfinal.

Ryan Cranford had two goals, Gabriel Vilardi one goal and two assists and Linus Nyman an empty-net goal and one assist for the third-place Frontenacs, who got 28 saves from goaltender Jeremy Helvig.

Luke Burghardt scored one goal and assisted on another for sixth-place North Bay, while Kyle Potts and Matthew Struthers also scored. Goaltender Christian Propp faced 27 shots before a crowd of 2,416 in the Battalion’s first game at Memorial Gardens since March 8, before the World Women’s Curling Championship took over the arena.

The Battalion faces playoff elimination in Game 5 at 7 p.m. Saturday at Kingston. If a sixth game is necessary, it will be played at North Bay on Sunday night.

“Any time you have as many power plays as we had and you didn’t capitalize on them, it hurts your hockey team,” said coach Stan Butler, whose Troops went 0-for-5 with the man advantage.

Kingston carried a 3-2 lead into the third period before Cranford scored his second goal of the series, the eventual winner, at 9:24 on an extremely sharp angle to Propp’s left, beating him high.

Burghardt responded at 10:27, taking a breakaway pass at centre ice from Justin Brazeau and snapping the puck over Helvig’s glove. Riley Bruce also assisted on the third goal of the series by Burghardt. It will be his last, as he incurred a match penalty when time expired.

Vilardi gave Kingston a 5-3 lead with his third goal of the postseason at 13:48, driving into the open mid slot to take a pass from the left-wing corner from Brett Neumann after a Braden Henderson turnover behind the net and beating Propp cleanly.

With the goaltender on the bench for a sixth skater, Nyman connected into the vacant net at 18:52.

Cranford opened the scoring 14 seconds into the second period off a pass from Vilardi, snapping the puck past Propp from the right faceoff dot. Pu doubled Kingston’s lead at 4:03, emerging from the penalty box to take a breakaway pass from Sean Day and scoring on the forehand under Propp’s glove.

Potts replied at 5:55 with his second goal of the series, making a back pass to Jake Henderson and getting a return feed past defender Eemeli Rasanen before skating in alone on Helvig for the score. Adam McMaster drew the second assist.

Pu scored his second goal of the postseason at 8:28 off a pass from Jason Robertson from behind the goal line to the right of the net. Pu kicked the puck forward to his stick and snapped the disc home.

Struthers scored at 13:34 after missed chances for Brazeau and Burghardt, putting the puck past Helvig from a sharp angle on the left wing. It was Struthers’s first goal of the series.

The physical first period saw North Bay go on the power play three times to Kingston’s once. The Frontenacs’ Tyler Burnie, who had words for Jesse Saban after he decked an attacker behind the Battalion net, drew a slashing penalty as the visitors’ Mitchell Byrne and Daniel Walker staged a brief fight, with Walker getting the takedown, at 5:57.

The Troops, who failed to score after Matt Hotchkiss went off for slashing at 9:16, forged a 7-0 lead in shots before Propp snagged a screened and deflected Nyman drive from the middle of the blue line at 12:36.

The game at Kingston can be seen live in North Bay on YourTV Channels 12 and 700 and heard on Country 600 CKAT.

BATTALION BULLETS: Burghardt drew a match penalty for a high stick on Byrne at 20:00 of the final period. Apart from the possibility of supplemental discipline, the call carries an automatic three-game suspension, putting Burghardt out of the series … Bruce played his 45th postseason game, tying Matt MacLeod for ninth place on the franchise’s career list … Kingston, which boasted the league’s top-ranked power play in the regular season, went 0-for-4 but is 5-for-16 in the series … Opening lines saw Struthers centring left winger Burghardt and right winger Brazeau, Potts pivoting left winger McMaster and right winger Henderson and Rhys Forhan centring left winger Walker and right winger Andy Baker. Centre Luke Moncada and right winger Patrick Brown had various linemates … The Battalion, which dressed 11 forwards and seven defencemen, was without Kurtis Evans, Brandon Coe and Brad Chenier … Coe and Chenier, who blocked a shot, suffered upper-body injuries in a 4-1 loss in Game 3 on Tuesday at the Sudbury Community Arena, the Troops’ adopted home for the night … Among the missing for Kingston were Max Jones and Liam Murray, who received a double minor for crosschecking after he hit Coe from behind into the boards in the third period at Sudbury. Murray has been suspended for two games … The referees were Brent Coulombe and Brett Montsion.