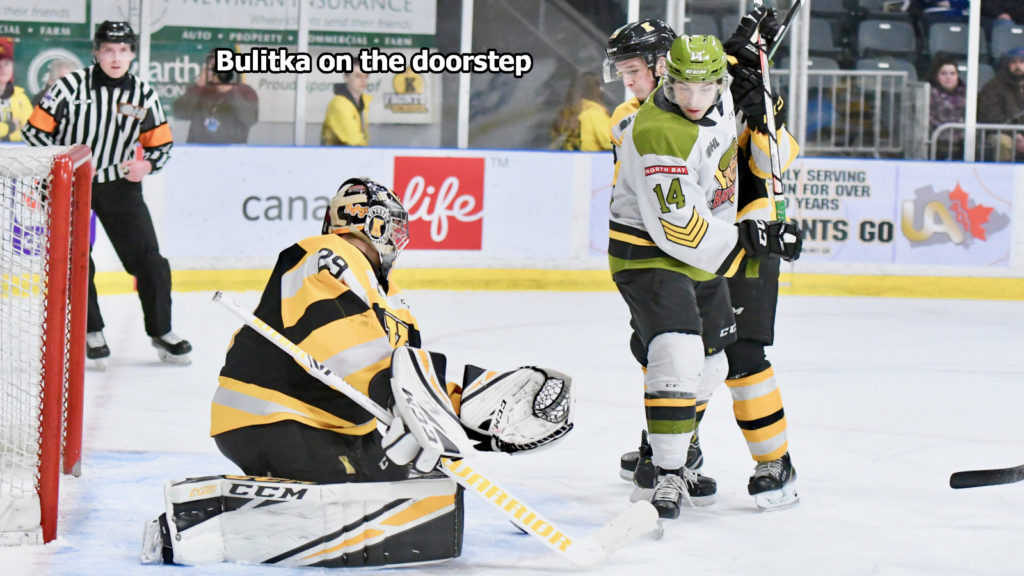 Dawson Baker, Francesco Arcuri and Vitali Pinchuk scored a goal apiece for Kingston, which moved its won-lost-extended record to 17-28-4 for 38 points, fifth and last in the East Division. Goaltender Ryan Dugas faced 22 shots as the Frontenacs won a third consecutive game before 2,567 at the Leon’s Centre.

Luke Moncada had one goal and one assist for North Bay, which also got goals from Harrison Caines and Shane Bulitka. Goaltender Joe Vrbetic made 29 saves for the Battalion, which incurred a sixth straight loss and is 11-37-2 for 24 points, fifth and last in the Central Division. The Troops played the second game of a three-game road trip after losing 8-3 Thursday night to the Peterborough Petes.

Wisdom scored his 23rd goal of the season, converting a cross-crease pass at the left lip, to give Kingston a 4-1 lead before Caines responded at 4:48 of the final frame. Chad Denault and Josh Currie combined to battle down the right side, and Currie fed the puck to the goalmouth for a redirection by Caines.

Caines was assessed a spurious match penalty for slew-footing at 7:55 and, after an offsetting high-sticking call against Pinchuk, the Troops killed a two-man disadvantage lasting 1:43 after Liam Arnsby went off for roughing.

With Kingston’s Jordan Frasca in the box for roughing, Bulitka poked the puck over the goal line at 14:18 to pull the Battalion within a goal, as Moncada and Brandon Coe assisted. It was Bulitka’s 20th goal of the season and his fourth since a Jan. 9 trade from the Sudbury Wolves.

North Bay pressed the issue in the final minutes but failed to get the equalizer, as Vrbetic made three attempts to leave the ice for a sixth skater before finally hitting the bench.

Baker struck first at 13:21 of the opening period, taking a pass from behind the goal line from Frasca and snapping the puck high to the blocker side from the right circle. Maddox Callens also assisted on Baker’s 16th goal.

Arcuri scored at 15:44, catching up to a puck lobbed down the ice by Nick Wong and, when Vrbetic hesitated on a pokecheck attempt, going to a forehand deke for a sixth goal on the season.

Pinchuk, a rookie Belarusian import, connected on the power play for his seventh goal at 10:54 of the second period, cashing a Jake Murray rebound from deep in the right circle. Lucas Peric also assisted.

Vrbetic stymied Pinchuk on a breakaway and, shortly afterwards, Moncada was credited with a goal at 16:08, flipping the puck high toward the net and seeing it sail under the crossbar as Jakob Brahaney leaped in an effort to glove it away only to direct it into the mesh. Moncada’s team-leading 28th goal was unassisted.

Shane Wright, who with Martin Chromiak assisted on Wisdom’s goal when play resumed after the intermission, drilled a rebound past Vrbetic on the power play as time expired in the frame. Referee Ryan Jenken, who worked with Jason Faist, went to video review, with the decision being no goal.

The Battalion’s Nick Grima took a Dustin Hutton shot to the face in the first period and Paul Christopoulos was struck high by a Wright drive in the second, but both returned quickly to action. Grima then took Baker’s stick to the face as the final buzzer sounded.

The Battalion completes the trip by visiting the Ottawa 67’s at 2 p.m. Sunday. The game can be seen live in North Bay on YourTV Channels 12 and 700 and heard on Country 600 CKAT.