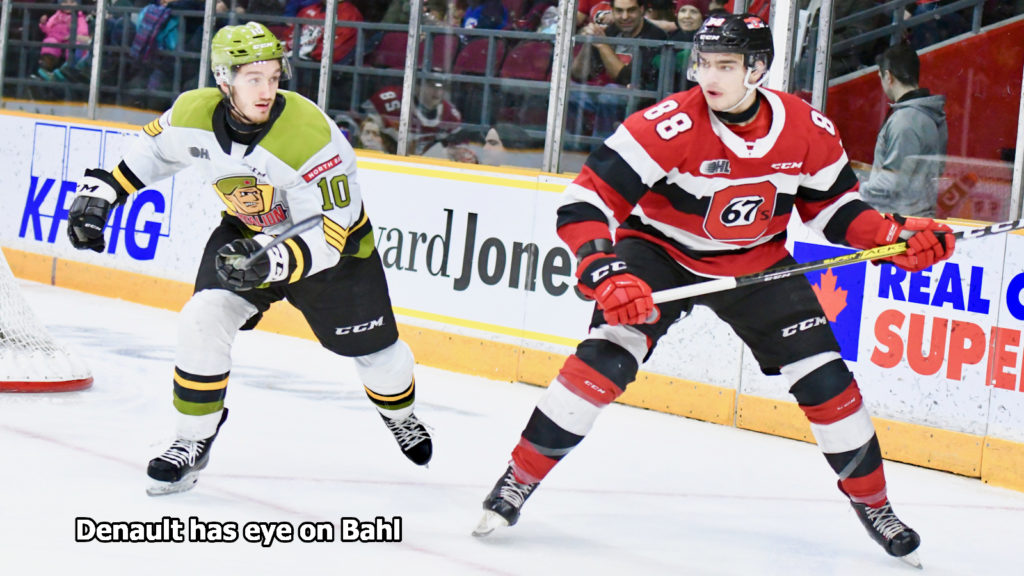 OTTAWA — Jack Quinn scored one goal and assisted on five others to lead the Ottawa 67’s to a 9-1 romp Sunday over the North Bay Battalion, handing the Troops their seventh consecutive Ontario Hockey League loss.

Austen Keating scored two goals and added two assists, Joseph Garreffa provided one goal and two assists and Noel Hoefenmayer and Mitchell Hoelscher each had one goal and one assist for Ottawa, which also got goals from Alec Belanger, Kevin Bahl and Teddy Sawyer. Goaltender Will Cranley made 16 saves before 4,826 at TD Place.

Ottawa pushed its won-lost-extended record to 41-8-0 for 82 points atop the East Division, Eastern Conference and league. The 67’s, who are 22-3-0 at home, had won 10 straight games before a 4-1 road loss Saturday night to the Peterborough Petes.

Ottawa played its third game in three days, after defeating the host Hamilton Bulldogs 5-4 in overtime Friday night and suffering the setback at Peterborough, site of the previous 67’s loss, 4-0 on Jan. 11.

Brandon Coe scored for North Bay, 11-38-2 for 24 points, fifth and last in the Central Division. Starting goaltender Joe Vrbetic gave up five goals on 19 shots in the first period before Cameron Lamour allowed four goals on 21 shots over the final 40 minutes.

The Battalion completed a three-game road trip, having lost 8-3 Thursday night to the Petes and 4-3 Friday night to the Kingston Frontenacs. The Troops’ last win was a 4-2 verdict Jan. 24 over the host Sudbury Wolves.

Ottawa, which boasts the OHL’s top-ranked power play, scored on four of five opportunities, while North Bay went 0-for-5. The Battalion’s 17 shots equaled its lowest total of the season, which was attained twice previously.

The 67’s jumped to a 5-0 first-period lead, forging a 19-2 edge in shots over the Battalion, which matched its season low, set Jan. 5 in the second period of a 3-2 overtime loss to the visiting Windsor Spitfires. Pacey Schlueting took North Bay’s first shot on goal, at 17:04.

Ottawa, which scored on its three power-play chances in the frame, struck with the man advantage at 2:51 when Garreffa’s wide shot rebounded off the end boards to Keating, who tucked the puck inside the left post. Vrbetic then stopped Quinn’s drive from the left-wing circle but had the puck land below him, with Belanger, a defenceman playing right wing, poking it home at 12:38 for the eventual winner.

Sawyer, a defenceman playing left wing, scored at 3:50 of the second period when his shot from the left circle glanced off Liam Arnsby past Lamour, and rearguard Hoefenmayer connected on a man-advantage blast at 7:54. Keating tipped home a Marco Rossi shot at 13:15, and penalty killer Hoelscher scored at 15:06.

Coe collected his 18th goal on a cross-crease pass from Harrison Caines at 58 seconds of the third period, and the Troops believed they had scored at 15:26. But referee Ryan Harrison, after consulting with the video goal judge, had the call overturned, with Caines deemed to have redirected a James Mayotte shot with the right skate while being upended by Hoelscher.

The Troops, who showed their best life of the game, were outshot 9-8 in the final frame. Cranley turned away a Josh Currie drive, foiled Christian Stevens as he drove to the net and denied Mitchell Russell from deep in the left circle with the Battalion on the power play. Lamour made excellent back-to-back stops on Garreffa and Keating in the sixth minute.

The Battalion entertains the Sarnia Sting at 7 p.m. Thursday on The Gathering Place Night.

BATTALION BULLETS: It was the teams’ second meeting, after Ottawa won 6-1 at home Dec. 1. They next meet Feb. 20 at North Bay … Luke Moncada, who had the second assist on Coe’s goal, has a six-game points streak in which he has four goals and five assists for nine points … Coe has a six-game points streak during which he has two goals and six assists for eight points … Opening lines included Moncada centring left winger Caines and right winger Coe, Shane Bulitka pivoting left winger David Campbell and right winger Russell and Arnsby centring left winger Kyle Jackson and right winger Alex Christopoulos. Stevens centred left winger Currie and right winger Chad Denault … The Battalion was without Ryan Thompson, Avery Winslow, Mason Primeau and Braden Henderson … Caines was spared supplementary discipline after being assessed a match penalty for a purported slew-foot against Kingston … Ty Hollett, a fourth-round pick in the 2019 OHL Priority Selection from the Navan Grads midgets, debuted on the Battalion blue line after being called up from the affiliated junior A Pembroke Lumber Kings … The Troops overnighted at Kingston throughout the trip … Rossi, who earned three assists, leads the OHL in points production with 94, including a league-high 64 assists … In two games against the Battalion, Keating has three goals and four assists for seven points … Tom Sweeney was the other referee.

Troops, Wolves square off
10 hours ago