Troops storm back to win 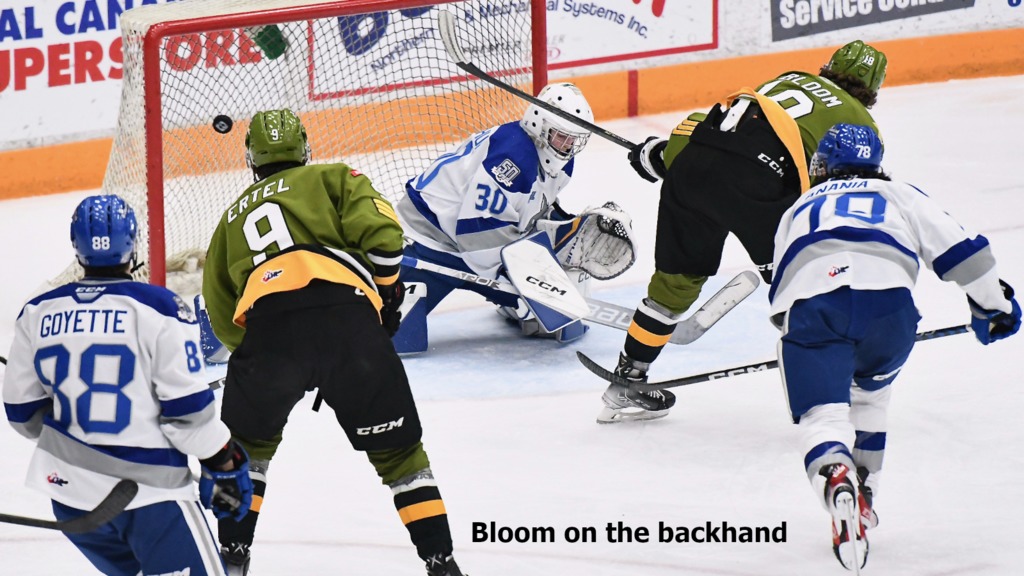 SUDBURY, Ont. — Matvey Petrov’s goal at 8:03 of the third period, which ended a run of four unanswered tallies, proved the winner as the North Bay Battalion rallied to defeat the Sudbury Wolves 7-4 in an Ontario Hockey League game Wednesday night.

Goaltender Charlie Robertson made 37 saves as the Battalion moved its won-lost-extended record to 16-8-0 for 32 points atop the Central Division. The Troops played the third of five consecutive road dates, while the Wolves embarked on a series of four home games before 2,628.

It was the Battalion’s 100th win all-time against Sudbury, dating to the expansion season of 1998-99, when the franchise was based in Brampton. The Battalion has a won-lost-tied record of 100-60-4 against the Wolves, the opponent the Troops have both played and beaten most often.

Nick DeGrazia, Devin Mauro, Nathan Villeneuve and David Goyette scored for Sudbury, which jumped to a 3-1 lead through 20 minutes. Goaltender Nate Krawchuk, making his first start since a 7-2 loss Oct. 21 to the host Kitchener Rangers, gave up six goals on 29 shots.

Sudbury, which was without four regulars because of illness or injury and dressed 11 forwards and seven defencemen, has a won-lost-extended record of 7-12-3 for 17 points, fourth in the division.

Head coach Craig Duncanson was fired after a 5-4 loss Oct. 29 to the host London Knights saw Sudbury slip to 3-7-1. Assistant general manager Ken MacKenzie took over on an interim basis, going 3-1-1, all at home, before his son, Derek MacKenzie, assumed the reins for a 4-3 loss Nov. 18 to the visiting Barrie Colts. Under the younger MacKenzie, the Wolves are 1-4-1.

The Battalion scored three unanswered second-period goals, sparked by Bloom at 3:04 when he took a pass from Kyle Jackson and, cruising across the top of the crease, hoisted a backhander behind Krawchuk.

Bloom struck again on the power play at 14:59, tipping a shot-pass from Jackson at the left side, with Ty Nelson also assisting. It was Bloom’s 10th goal of the season and third since a Nov. 16 trade from the Saginaw Spirit.

Wakely connected at 16:52 after Petrov disrupted a breakout and fed a crisp pass to Wakely in the left circle for a 4-3 lead.

With the teams skating four a side, Petrov, assisted by Brayden Hislop and Nelson, got loose on a breakaway for his 10th goal in the final period before Goyette cut Sudbury’s deficit to 5-4 at 12:09 when he went in alone on Robertson.

Arnsby ripped home a pass from Justin Ertel, who emerged from behind the net, at 17:10 and, with Krawchuk gone for a sixth skater, Wakely scored into the empty net at 18:33. It was his 14th goal, tying Jackson for the team lead.

DeGrazia stole the puck from Paul Christopoulos at the Battalion blue line and raced in alone on Robertson to open the scoring at 5:13 of the first period before Podolioukh tied it with his first goal 1:35 later, taking a pass from Jacob Therrien on an odd-man rush. It was Therrien’s first OHL assist.

Mauro connected at 10:57, beating Robertson over the glove after the puck skittered out of the right-wing corner. Landon McCallum drew the lone assist on rookie Mauro’s first OHL goal. Villeneuve then made it 3-1 at 11:31 when he put the puck home from the left circle off a rush, with Jakub Chromiak assisting.

The Battalion visits the Kingston Frontenacs at 7 p.m. Friday to open a two-game weekend road trip. The game can be seen live in North Bay on YourTV Channels 12 and 700.

BATTALION BULLETS: The game was the first of eight between the Highway 17 rivals after they met 12 times under the special schedule format of last season, when the Battalion went 9-2-1. The next meeting is Dec. 28 at North Bay … The Battalion went 9-4-0 in November … Nelson, who earned two assists, has a six-game points streak during which he has two goals and 10 assists for 12 points … Ertel, also with two assists, has a five-game points streak in which he has two goals and four assists for six points … The Battalion went 1-for-2 on the power play. Sudbury was 0-for-3 … The Battalion was without Tnias Mathurin, Avery Winslow, Kyle McDonald and Brett Bouchard … Goaltender Mike McIvor, who backed up Robertson twice and stopped 37 of 39 shots in a 4-1 road loss to the Hamilton Bulldogs last week, has returned to the North Bay Trappers U18s. Dom DiVincentiis, who missed those three games while in concussion protocol, was back in uniform … Among the missing for Sudbury was Quentin Musty, who completed a two-game suspension issued after he drew a misconduct penalty for throwing equipment in a 5-4 overtime loss last Friday night at Kingston. Musty is his team’s second-highest points producer, with seven goals and 18 assists for 25 points in 20 games … Overager Joe Ranger, Sudbury’s No. 1 goaltender and one of the scratches, started the previous 13 games … Jack Hennigan and Alex Ross were the referees.