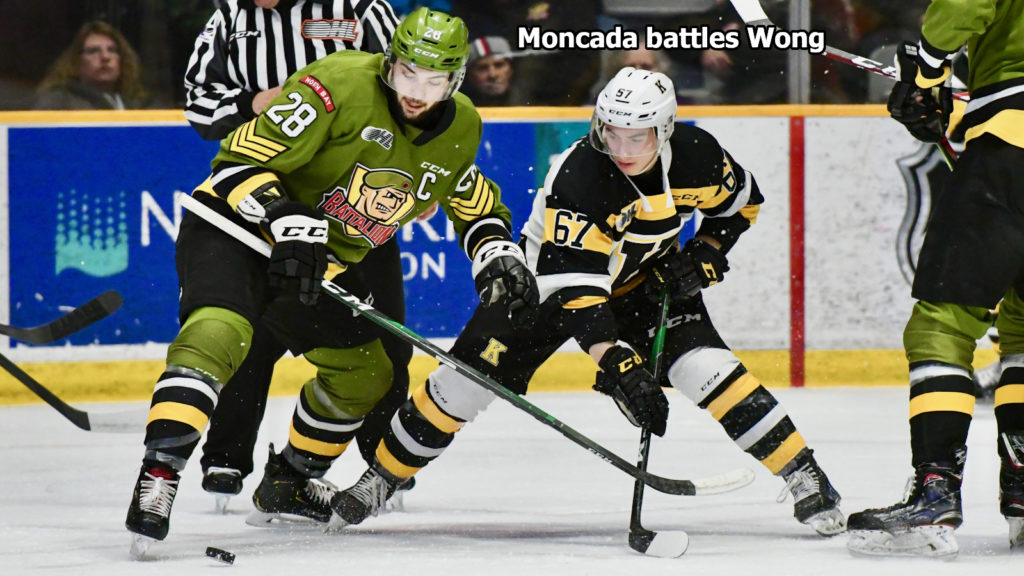 NORTH BAY, Ont. — Harrison Caines scored a third-period goal and goaltender Joe Vrbetic made 25 saves for the shutout as the North Bay Battalion downed the Kingston Frontenacs 1-0 Thursday night to pull within four points of a playoff berth in the Ontario Hockey League’s Eastern Conference.

North Bay, winning a third straight game for the second time, improved its won-lost-extended record to 17-39-4 for 38 points, fifth and last in the Central Division.

Goaltender Christian Propp faced 37 shots for Kingston, 19-37-4 for 42 points, fifth and last in the East Division and tied with the Niagara IceDogs for the eighth and final conference playoff spot. The Battalion, Frontenacs and IceDogs all have eight games left.

“That’s as complete a game as we can find,” said interim coach Ryan Oulahen of the Battalion, 6-1-1 in its last eight games.

“We thought going into the third period that, if we kept sticking with it, we’d get a bounce go our way, and Caines got a big goal for us. That’s been our theme lately: other guys jumping in and getting some production for us, which is massive. Propp played really well for them. We gave up some chances, and Joe made some key saves as well.”

With three defencemen sidelined, Braden Henderson, who lost the previous 14 games to injury, returned to action, and Ty Hollett played his fourth game with the Troops before a Memorial Gardens crowd of 1,984.

“That was an impressive performance,” Oulahen said of the blueliners’ efforts in support of rookie Vrbetic’s second shutout.

The Battalion had several good chances early in the third period before Caines scored at 6:50. Ryan Thompson fired the puck from the right point, creating a traffic jam in front that saw several players attempt to corral the disc before Caines arrived to lift it past Propp from the right lip of the crease. Mason Primeau had the primary assist on Caines’s seventh goal of the season.

Kingston, outshot 17-10 in the frame, generated two good chances the rest of the way. Vrbetic, who got his glove on a Dawson Baker drive off the right wing in the eighth minute, foiled Zayde Wisdom at the right side in the final seconds with Primeau off for hooking and Propp gone for a sixth skater.

North Bay’s best chances in the first period came late in the session. Propp denied Kyle Jackson as he drove to the net in the 16th minute and stopped Luke Moncada from the deep slot in the final seconds. Vrbetic, who made back-to-back saves against Lucas Rowe and Justin Pringle in the third minute, slid to repel a Dustin Hutton effort off the right wing in the sixth.

Both teams had good chances in the middle period, when the Battalion forged an 11-9 edge in shots. The Troops dominated early, with Propp making stops on Moncada and Alex Christopoulos. Kingston went without a shot for a span of 20:43 before Pringle was credited with an attempt at the right post at 10:15. Each goaltender turned away a breakaway chance. Vrbetic got the blocker on Maddox Callens’s shot in the 13th minute, and Propp pokechecked penalty killer Moncada in the 15th.

Kingston’s Shane Wright, the OHL’s rookie scoring leader, missed the right post alone in the goalmouth in the 18th minute. Propp, a onetime member of the Battalion, sprawled to deny Chad Denault as he tried to convert a close-range rebound in the 19th minute, and Vrbetic foiled Vitali Pinchuk in close in the 20th.

The Battalion visits the Mississauga Steelheads at 7 p.m. Friday. The game can be heard live in North Bay on Country 600 CKAT.

BATTALION BULLETS: It was Community Appreciation Night presented by Canadore College. One prospective student won a year’s tuition in an intermission contest as ‘Panther Pride’ was on full display … The Battalion went 1-3-0 against Kingston this season. The Frontenacs won 4-3 at home Nov. 29, 6-3 at North Bay on Feb. 2 and 4-3 in the Limestone City five nights later … The Battalion’s Shane Bulitka saw the end of a four-game points streak in which he had two goals and six assists for eight points … The Battalion went 0-for-2 on the power play. Kingston was 0-for-3 … Opening lines featured Moncada centring Bulitka on left wing and right winger Brandon Coe, Primeau centring left winger Caines and right winger Denault and Liam Arnsby pivoting left winger Jackson and right winger Christopoulos. Josh Currie centred left winger David Campbell and Christian Stevens on right wing … North Bay was without Paul Christopoulos, Pacey Schlueting, Avery Winslow and Mitchell Russell … Battalion defenceman James Mayotte turned 18 Wednesday … Kingston’s Lucas Peric started serving a four-game suspension after engaging in a second fight in a 10-2 road loss Sunday to the Windsor Spitfires … Propp joined Kingston from the Sault Ste. Marie Greyhounds in a trade Nov. 12. The Battalion dealt him to the Greyhounds on June 12 … The referees were Ryan Elbers and Mike Hamilton.