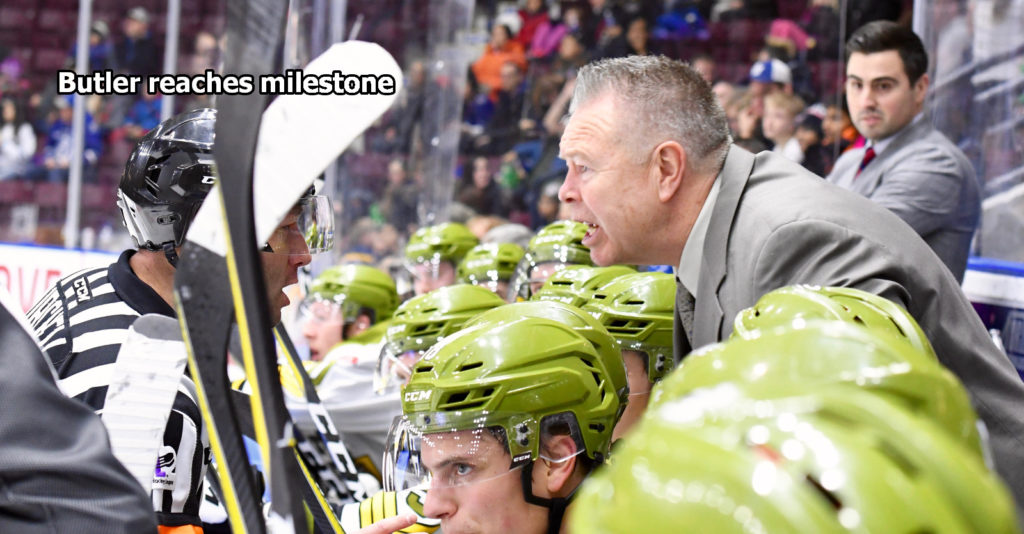 Matthew Struthers also scored for North Bay, which moved its won-lost-extended record to 28-25-9 for 65 points, third in the Central Division and sixth in the Eastern Conference. Goaltender Christian Propp provided 35 saves in a stellar performance as the Troops ended a three-game losing skid and jumped one point ahead of the Ottawa 67’s, seventh in the conference after a 3-1 loss to the host Hamilton Bulldogs.

Nicholas Hague scored for Mississauga, while goaltender Jacob Ingham faced 29 shots before 2,107 at the Hershey Centre. The Steelheads are 28-30-3 for 59 points, fourth in the division and eighth in the conference.

“If I couldn’t get that win at home, my first choice would be to win it here,” said Butler. “I’ve coached a lot of games in this building.”

The Battalion, which trailed 1-0 after 20 minutes, seized the lead with a pair of late second-period goals, sparked by Struthers at 16:55. He took the puck behind the net and tucked it home on the backhand at the left post. Luke Burghardt assisted on Struthers’s 20th goal of the season, his 11th since joining the Troops in a Jan. 3 trade from the Owen Sound Attack.

Thilander connected on a bouncing shot through traffic 29 seconds later. It was the 10th goal for defenceman Thilander and his fourth in the last four games.

A would-be Mississauga scoring play went to video review at the end of the period, confirming referee Darcy Burchell’s no-goal signal as the puck ricocheted off both goal posts before being cleared away by Riley Bruce. Josh Schein was the other referee.

Propp was called on to make 15 saves in the final period, including denying Mississauga on the only power play of the frame, after an interference call against Struthers at 16:23. The Steelheads pulled Ingham for a sixth skater with 1:36 left and spent most of the rest of the game in the Battalion zone but couldn’t get the equalizer.

Hague opened the scoring on the power play at 17:21 of the first period, taking a cross-crease pass from Ryan McLeod for an easy conversion on the left side that gave Propp no chance. It was defenceman Hague’s team-leading 31st goal.

Justin Brazeau was in the penalty box serving a bad goaltender interference call for colliding with Ingham, who was well out of his crease, after taking a shot on a two-on-one rush with Burghardt, one of several chances the Battalion had in dominating the period and outshooting the home side 14-11.

Brazeau hit the left post on an odd-man rush with Burghardt in the 11th minute, and Burghardt was foiled, with the puck flipping over the net, on a solo sortie in the 15th. Luke Moncada shot wide right of Ingham’s net at the 15-minute mark before Michael McLeod had two chances in alone on Propp, in the 16th minute and at 16:24.

The Battalion plays host to the Kingston Frontenacs at 2 p.m. Sunday on Fan Appreciation Day, presented by the Boots & Hearts Festival. Pregame ceremonies will feature recognition of team billets as well as individual player awards presentations. Fans will be able to enter a draw to win two full passes to Boots & Hearts scheduled Aug. 9-12 in the Township of Oro-Medonte.

BATTALION BULLETS: Butler has a won-lost-tied record of 700-721-65 in 1,486 OHL games, including 630-672-52 in 1,354 games with the Battalion. He went 70-49-13 over two seasons with the Oshawa Generals starting in 1994-95. Butler ranks fourth in all-time wins, behind the retired Brian Kilrea with 1,194, the late Bert Templeton with 907 and Dale Hunter of the London Knights with 721 … The teams completed their season series, with the Battalion winning five of six games … Bruce played a 263rd game, tying Mike Amadio for seventh place on the franchise’s all-time list … Brazeau saw the end of a nine-game points streak in which he had six goals and eight assists for 14 points … The Battalion went 0-for-1 with the man advantage. Mississauga, with the OHL’s top-ranked power play, was 1-for-4 … Opening lines saw Struthers centring left winger Burghardt and right winger Brazeau, Kyle Potts pivoting Andy Baker on left wing and right winger Jake Henderson and Moncada centring left winger Brad Chenier and right winger Brandon Coe. Rhys Forhan centred Simon Rose, normally a defenceman, on left wing and right winger Patrick Brown … The Battalion was without Daniel Walker, Adam McMaster and Kurtis Evans, who took a check to the head by Nikita Okhotyuk in a 4-2 home-ice loss Thursday night to Ottawa … Mississauga’s Owen Tippett had a six-game scoring streak, in which he had seven goals, ended.