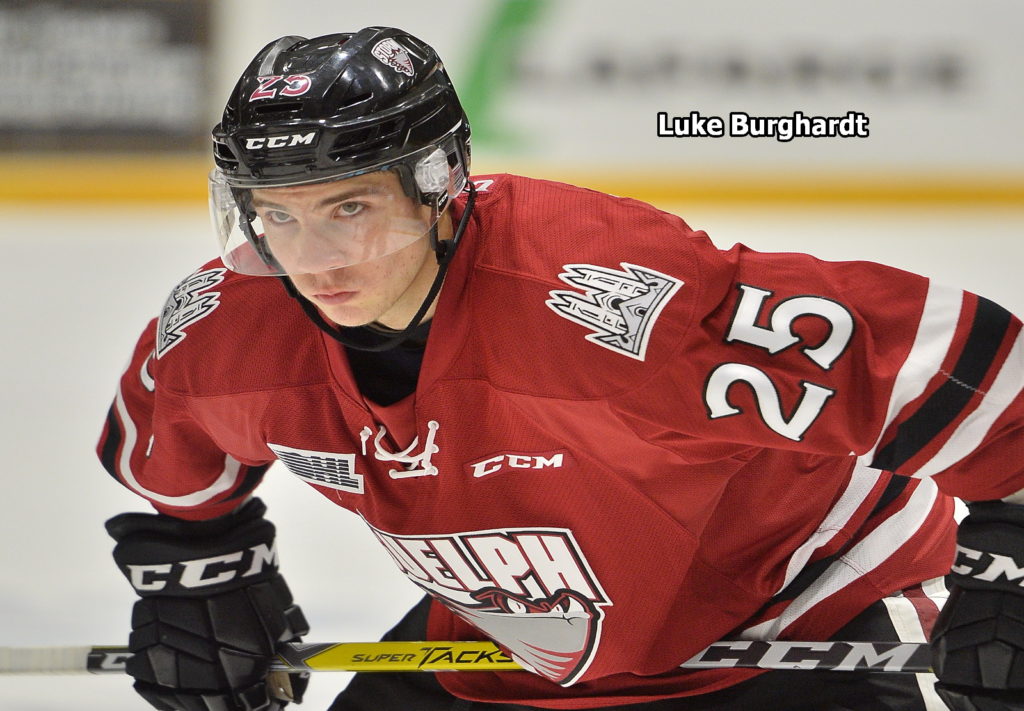 The Battalion sent right winger Zach Poirier, defenceman Mark Shoemaker and a conditional third-round pick in the 2021 OHL Priority Selection to Guelph. The pick reverts to North Bay if Shoemaker plays as an overager in 2017-18.

Centre Burghardt, a 19-year-old resident of Bowmanville, Ont., had nine goals and 11 assists for 20 points in 53 games last season, his third with the Storm. In 169 OHL games, he has scored 27 goals and earned 31 assists for 58 points while accumulating 95 penalty minutes.

The five-foot-11, 165-pound left shot was chosen by Guelph in the sixth round of the 2014 OHL Priority Selection from the Clarington Toros minor midgets.

Left winger Moncada, 17, had five assists in 37 games in his rookie season with the Storm, when he was assessed 16 penalty minutes. He was a third-round selection in 2016 from the Toronto Red Wings minor midgets. The Toronto resident stands six-foot-one and weighs 199 pounds.

“In the case of Burghardt, we’re giving a player a chance to play who had 17 goals as a 17-year-old, and we hope he can get back there,” said Stan Butler, director of hockey operations and head coach.

“In Moncada’s case, he’s a player we were after in the Priority Selection, so we’ve got another good young player.”

Poirier, 19, was the Battalion’s first-round pick in the 2014 OHL Priority Selection from the Upper Canada Cyclones minor midgets. In 183 games over three seasons with the Troops, the Mountain, Ont., resident scored 38 goals and added 25 assists for 63 points. He had 15 goals and 13 assists for 28 points in 64 games last season.

Shoemaker, a Mississauga resident who turns 20 on Sept. 28, had five goals and 29 assists for 34 points in 174 games with North Bay after being selected in the 11th round in 2013 from the Mississauga Reps minor midgets. A sixth-round pick by the San Jose Sharks in the 2016 National Hockey League Draft, he registered 16 assists in 68 games last season.