In exchange for Jones, who was one of three Battalion overagers, the club receives a third-round pick in the 2011 OHL Priority Selection and a fifth-round choice in 2013.

The Battalion, which has lost its last five games and 10 of the last 11, still has left winger Stephon Thorne and right winger Scott Tanski as overagers.

“It was a tough decision,” said Stan Butler, director of hockey operations and head coach. “But given the uncertainty of our goaltending right now, I thought it was important to open up an overage spot in case I need to use it for a goalie as the season moves along.”

The Battalion acquired Jones from the Erie Otters on Aug. 24, 2009, for a sixth-round pick in the 2011 OHL Priority Selection and the rights to defenceman Evan Accettura. Jones, who has 11 goals and five assists for 16 points in 22 games this season, led the Troops with 32 goals and 49 points in 68 games last season, adding eight goals and four assists for 12 points in 11 playoff games.

“Sean was a very talented offensive player for our team, and he scored some big goals,” said Butler.

Butler said the trade helps the club for the future.

Kingston, which hosts the Battalion on Friday night, is tied with the Oshawa Generals for second place in the East Division. The Frontenacs have made two other significant trades recently, acquiring 18-year-old centre Ryan Spooner from the Peterborough Petes and overage defenceman Mitch Gaulton from Erie.

“This is a great opportunity for Sean,” said Butler. “He’s going to a really good program with a really good coach in Doug Gilmour. There are a lot of talented players there, and adding Sean along with Spooner and Gaulton will help them be right there as one of the top contenders in the Eastern Conference.” 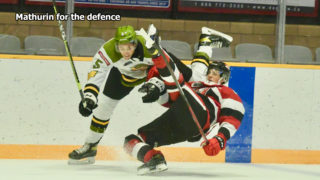