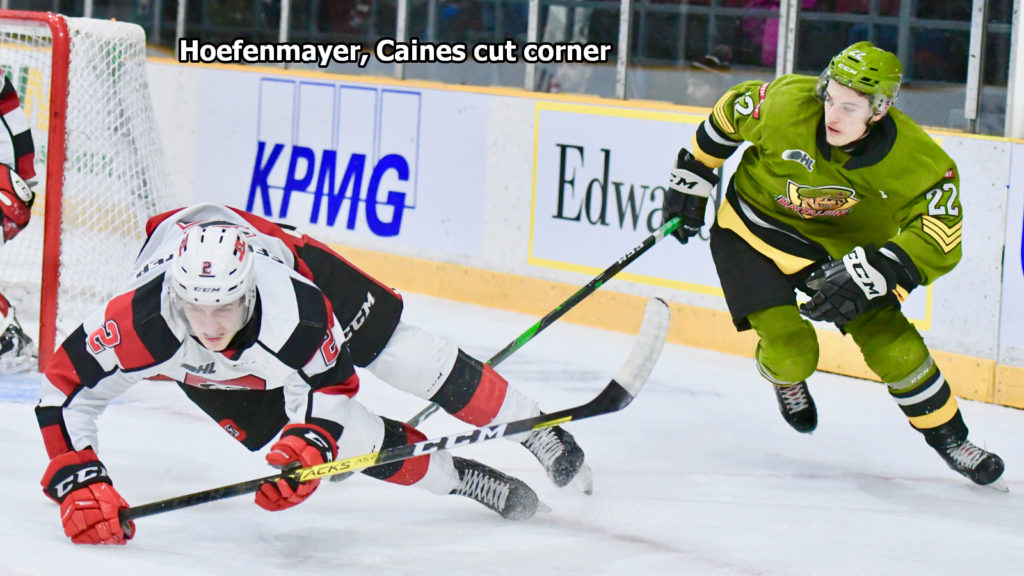 OTTAWA — Marco Rossi scored two goals and added an assist as the Ottawa 67’s pushed their winning streak to seven games with a 6-1 Ontario Hockey League victory Sunday over the North Bay Battalion.

Austen Keating and Joseph Garreffa each had one goal and two assists and Yanic Crete and Alec Belanger also scored for Ottawa, which boasts a won-lost-extended record of 20-6-0 for 40 points, tied with the idle Peterborough Petes atop the East Division, Eastern Conference and league. Goaltender Will Cranley made 21 saves before a TD Centre crowd of 3,293.

Mitchell Russell contributed the lone goal, while goaltender Joe Vrbetic faced 30 shots for North Bay, which lost a third consecutive game on a three-game road trip and is 5-22-0 for 10 points, fifth in the Central Division. The Battalion, which opened the trip with a 6-1 loss Thursday night to the Peterborough Petes, suffered a 4-3 setback Friday night to the Kingston Frontenacs.

Cranley was the third goaltender taken in the 2018 OHL Priority Selection, 35th overall from the Peterborough Petes minor midgets. Vrbetic was the second, selected 31st overall. Cranley has a 7-1-0 record, a 3.26 goals-against average, an .868 save percentage and one shutout.

Vrbetic made two outstanding early saves against Keating at the right side, but he backhanded the second rebound through the crease behind the goaltender to Rossi, who fired the puck home at 1:18 of the first period. Keating then got behind Paul Christopoulos off a faceoff and tipped Kevin Bahl’s left-point shot past Vrbetic at 5:32 for what proved to be the winning goal.

Vrbetic, who faced 10 shots in the frame, made three terrific close-in saves, two on Keating and one on Garreffa, in the last minute with Ottawa on the power play. The Battalion had eight shots, its best chance coming in the 18th minute when Josh Currie tested Cranley off the left wing.

Rossi struck at 4:35 of the second period, driving to the net off the left boards past a sliding Braden Henderson and slipping a backhander between Vrbetic’s pads. It was Rossi’s 16th goal of the season, tying Mitchell Hoelscher for the team lead.

Russell grabbed a Belanger turnover in Battalion territory and outraced Teddy Sawyer on a breakaway, beating Cranley to the glove side at 11:53.

Cranley denied Luke Moncada twice at the right post and foiled Brad Chenier on two drives from the slot, while Moncada rang the puck off the left post on the power play in the 15th minute of the frame. Vrbetic, who stymied a Crete breakaway in the third minute and a following chance for Jack Quinn, got the glove on a close-range effort by Cameron Tolnai in the sixth minute and was strong against Jack Beck on the doorstep in the final seconds.

Crete connected at 4:05 of the third period, jamming the puck inside the right post on a wraparound, and Garreffa’s drive from between the circles went off the left post into the net at 12:44 for his 14th goal. With the teams skating four-on-four, Belanger took a Rossi pass and beat Vrbetic from the left circle at 17:40.

The Battalion is idle until playing host to the Flint Firebirds at 2 p.m. Sunday on The Home Depot Day.

BATTALION BULLETS: On Britney Spears Appreciation Day, the 67’s promised top hits, karaoke and birthday celebrations. The pop star, who wasn’t in attendance, turns 38 on Monday … Adam Dennis, a Battalion assistant coach and assistant general manager, was absent for a third consecutive game while scouting … North Bay went 0-for-2 on the power play. Ottawa was 0-for-5 … Opening lines included Moncada centring left winger Chenier and right winger Brandon Coe, Matthew Struthers centring left winger Kyle Jackson and right winger Russell and Cameron Peters pivoting left winger Harrison Caines and Liam Arnsby on right wing. Currie centred left winger Niki Korpialho and right winger Alex Christopoulos … The Battalion was without Ryan Thompson and Mason Primeau … Paul Christopoulos returned from a two-game suspension assessed after he took a match penalty for slew-footing in a 4-3 home-ice win last Sunday over the Niagara IceDogs … Coe turned 18 on Sunday … The Troops overnighted at Kingston throughout the trip … Ottawa’s Noel Hoefenmayer, who was held off the scoresheet, leads OHL defencemen in scoring with 10 goals and 25 assists for 35 points in 26 games … Rossi has a nine-game points streak in which he has 11 goals and 12 assists for 23 points … Garreffa has a nine-game points streak during which he has nine goals and 12 assists for 21 points.