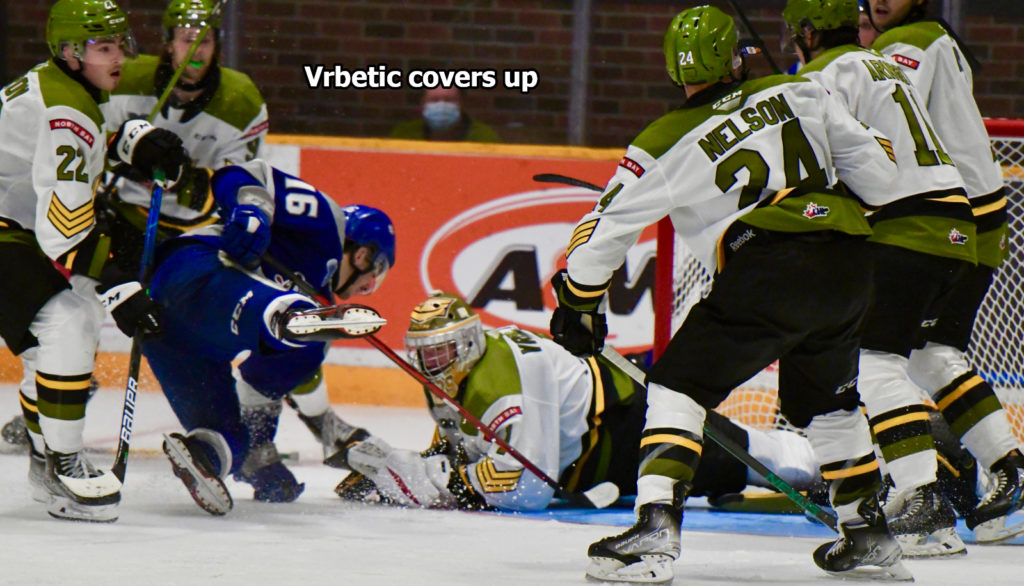 NORTH BAY, Ont. — Brandon Coe scored at 13:05 of the third period to lift the North Bay Battalion to a 3-2 Ontario Hockey League victory Monday over the Sudbury Wolves in the Troops’ traditional Thanksgiving Day matinee.

Jack Thompson and Alex Assadourian scored for Sudbury, which held period leads of 1-0 and 2-1. Overage goaltender Mitchell Weeks faced 33 shots before leaving for a sixth attacker.

The Battalion, which opened a four-game home stand before a crowd of 1,896, moved its won-lost-extended record to 2-1-0 while handing the Wolves their first loss in three games to open the long-anticipated season.

The first of 12 meetings between the teams featured the No. 1 pick in each of the last two OHL Priority Selections, Ty Nelson of the Battalion in 2020 and Quentin Musty of Sudbury last June, a selection won in a league-wide lottery following the cancellation of the 2020-21 season because of the coronavirus pandemic.

“We found a way to get two points,” said Battalion coach Ryan Oulahen.

“Overall, we weren’t pleased at how we came out once again here at home. I think we’re going to have to find a way to improve on that. But in the game it was probably big-time plays at big-time moments that got us the two points, and a great effort by Joe.”

Defenceman Rose tied it 2-2 on the power play at 3:59 of the final period, pinching to the left lip of the crease to convert a smooth diagonal pass from rookie Dalyn Wakely, who earned his first OHL point.

Coe then converted from the left lip of the crease after a cross pass from Kyle Jackson, with Nelson also assisting on Coe’s third goal of the season.

Sudbury staged a furious siege in an effort to tie it in the final two minutes, but Vrbetic was up to the task. Earlier in the period he denied Giordano Biondi on a shorthanded breakaway at 2:59 and robbed Nick DeGrazia in the fifth minute. Vrbetic also foiled Biondi as the trailer after a giveaway in the 11th minute.

Currie netted his second goal at 4:31 of the middle period to produce a 1-1 tie after persistent forechecking by the Troops. Alex Christopoulos and Liam Arnsby were credited with assists.

Assadourian put the visitors back in front at 11:01, tapping the puck home at the right side.

Thompson scored shorthanded at 11:28 of the first period on assists by Chase Stillman and David Goyette, backhanding home a deke from the slot with Musty off for hooking. It was defenceman Thompson’s third goal.

The Battalion had to kill two penalties in the period, the second after Paul Christopoulos was whistled for interference at 16:58 with Michael Derbidge and Jackson already serving roughing minors from a fracas 37 seconds earlier.

The Battalion faces the Mississauga Steelheads at 7 p.m. Friday.

BATTALION BULLETS: The Battalion has an all-time won-lost-extended record of 15-5-3 on Thanksgiving Day, including 6-2-0 since relocation to North Bay in 2013. Sudbury provided the holiday opposition for the third time, after the Brampton-based Troops posted wins of 4-3 on Oct. 14, 2002, and 4-0 on Oct. 13, 2008. North Bay defeated the Sault Ste. Marie Greyhounds 7-5 on Oct. 14, 2019, in the most recent such game … The Battalion went 1-for-6 on the power play. Sudbury was 0-for-4 … Opening lines saw Jackson centring left winger Matvey Petrov and right winger Coe, Arnsby centring left winger Currie and right winger Alex Christopoulos, Wakely pivoting left winger Owen Van Steensel and right winger Nic Sima and Michael Podolioukh centring left winger Owen Outwater and right winger Christian Stevens … Defence pairings were Avery Winslow with Rose, Tnias Mathurin with Nelson and Alexander Lukin beside Paul Christopoulos … Dom DiVincentiis backed up Vrbetic, who made several big stops without his stick in a second-period flurry … The Battalion scratched Cam Gauvreau, Anthony Romani and Mitchell Russell … Sault Ste. Marie’s Ryan O’Rourke received a two-game suspension for a head-checking major, with a game misconduct, on Outwater in a 4-1 win Friday night over the visiting Battalion … Brendan Kane and Andrew Willmetts were the referees.