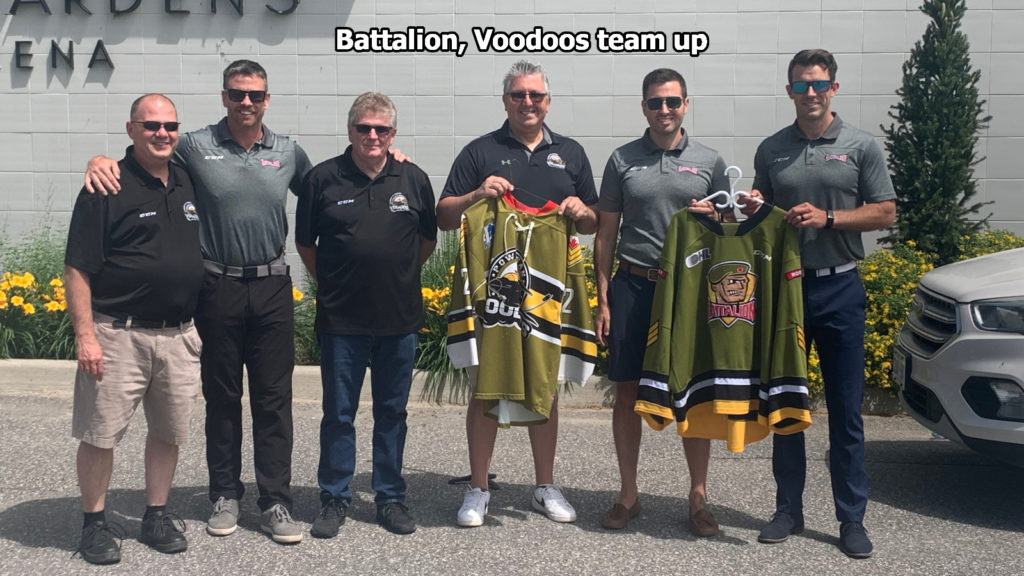 NORTH BAY, Ont. — The North Bay Battalion and the junior A Powassan Voodoos have renewed their affiliation after two years apart.

General managers Adam Dennis of the Ontario Hockey League’s Battalion and Chris Dawson of the Northern Ontario Junior Hockey League’s Voodoos were among those at the announcement Wednesday at Memorial Gardens.

“I think we’ve all had some time over this pandemic to kind of connect and, as neighbors in our locality, it was a no-brainer for us,” said Dennis.

“There are lots of opportunities for us to have players there and have a mutually beneficial development opportunity, and that was something that we just couldn’t ignore. Chris and I have worked together in a lot of other fashions, and it’s something that we’ve talked about on a regular basis.

“From our end, seeing their track record over the last couple of years, we know that they can develop players at a high rate, and we’d be very comfortable to have some of our prospects play there.”

The Battalion and Voodoos were affiliated for five years, starting in 2014-15 when Powassan played its expansion season. Scott Wray, the club’s first head coach and now an assistant to Ryan Oulahen with the Troops, led the Voodoos to a league title in 2016-17. Several head coaches followed before Marc Lafleur assumed the reins for 2021-22, which Dennis cited as promising.

The Battalion had a two-year affiliation with the junior A Pembroke Lumber Kings of the Central Canada Hockey League starting in 2019-20.

“It’s one step back and two steps forwards,” Dawson noted of the renewed partnership.

“One of the things we’ve always done well when we were the affiliate is we believe that we can win with younger players, and I think that’s one of the more unique things that benefit the Battalion. They know that, if they send us a 17-year-old or a 16-year-old, they’re going to get an opportunity here, whereas some of the other junior leagues don’t have the same comfort level at 16 or 17.

“Quite frankly, they don’t because they haven’t had the success that we’ve had with those age groups.”

Dawson noted onetime forward Steve Harland and current Battalion goaltender Joe Vrbetic as among those who have starred for both Powassan and North Bay, a theme shared by Jim Bruce, the Voodoos’ president and principal owner.

“I’m very happy to be back associated with the Battalion again,” said Bruce. “It gives us the opportunity to look at a lot of good hockey players that we probably wouldn’t be able to see. I think the fans look forward to taking a look at the younger kids starting up.”