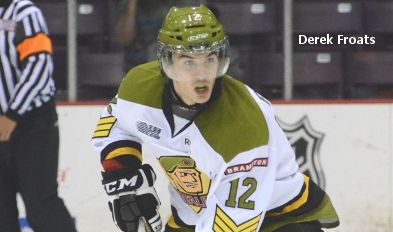 BRAMPTON, Ont. – The Brampton Battalion will have two fresh faces in tow on a three-game Ontario Hockey League road trip that starts at 7:35 p.m. Wednesday against the Sudbury Wolves, while injured left winger Derek Froats has been placed on waivers.

Overager Froats is to undergo surgery Dec. 12 to repair torn tendons in a wrist, an injury that has kept him out of eight games since his last appearance, when he scored the Troops’ first goal in a 4-1 victory Oct. 21 over the visiting Barrie Colts.

Stan Butler, Battalion director of hockey operations and head coach, said Froats suffered the injury in an earlier game when checked into the boards and tried to play through it. Recovery time from the surgery is three to six months.

Defenceman Kyle Wood and right winger Calvin Gomes are to accompany the team on the road trip, and Butler said he wants to get each of them into at least one game.

Wood, the club’s third-round choice in the 2012 OHL Priority Selection, has played four Battalion games this season and often practises with the team while suiting up for the affiliated junior A Orangeville Flyers.

Gomes, whom the Battalion signed Oct. 30, has seven goals and four assists for 11 points in 16 games with the junior B Brampton Bombers. He was an eighth-round pick this year from the North York Rangers minor midgets.

“He helped the centres with faceoffs, too,” noted Butler, whose charges play their next five games on the road.

The Troops, coming off their first set of three games in as many days this season, play at Sudbury before dates with the Sault Ste. Marie Greyhounds on Friday night and the Saginaw Spirit on Saturday night.

The Battalion, which has won its last two games, has a won-lost-extended record of 8-8-5 for 21 points, fourth in the Central Division and three points ahead of Sudbury, 8-11-2. The teams have completed two of eight meetings, with each winning at home. The Wolves prevailed 4-1 on Sept. 23, and the Troops won 4-2 on Nov. 4.

“They’re a division rival,” said Butler. “We’re close with them in the standings, so it’s an important game for us.”

Said Butler: “To stop any team, you have to shut down their big guys. The thing about Sudbury is that they have a well balanced attack.”

Left winger Joshua Leivo leads the Wolves in scoring with 11 goals and 11 assists for 22 points in 21 games. Defenceman Frank Corrado is second with 17 points, from one goal and 16 assists, in 21 games. Both played for Team OHL against Russia in the fourth game of the Subway Super Series at Sarnia on Monday night, with Corrado scoring what proved to be the winning goal in a 2-1 decision.

Sudbury has lost its last four games, including three on the road. Wednesday night marks the first of four straight home dates for the Wolves.

“Heading into it, it doesn’t matter what their record is,” said Butler. “Anytime we play there it’s tough, so we have to be ready to go right away.”

Butler said the three-game excursion into Northern Ontario and Michigan should prove helpful to the Troops.

“It’s good for team-building. Over the next couple of days the guys are going to get to spend some time together, and that will bring good things.”

The Battalion visits Barrie on Nov. 22 and the Mississauga Steelheads the following night before playing its next home game, when it hosts Sudbury on Nov. 25. The Troops, 1-5-3 away from home, edged Barrie 4-3 Saturday night for their first road win of the season and defeated the visiting Guelph Storm 5-1 Sunday.

Northern rivalry on docket
21 hours ago 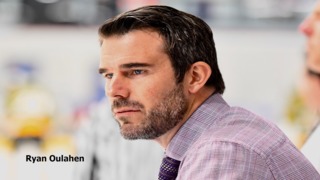 Battalion, Spitfires to clash
7 days ago 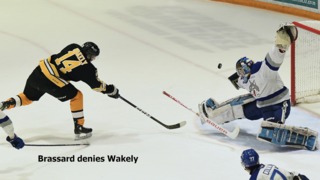