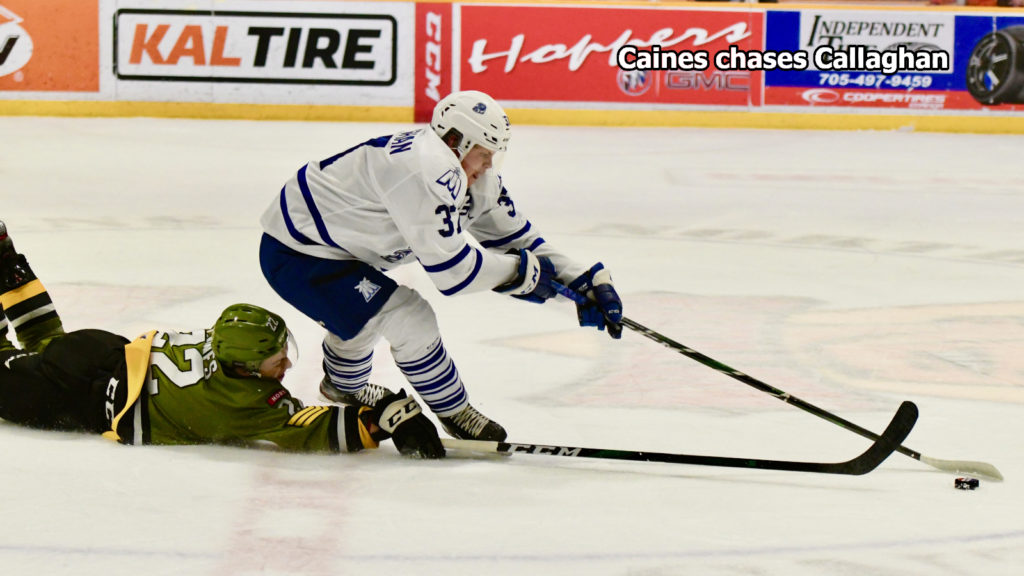 NORTH BAY, Ont. — Simon Rose scored at 4:32 of overtime to lift the North Bay Battalion to a 3-2 victory over the Mississauga Steelheads in Ontario Hockey League action Sunday.

An end-to-end rush saw Rose race down the right wing, move around Thomas Harley and, driving to the goalmouth, snap the puck over Mississauga goaltender Kai Edmonds’s glove. Shane Bulitka earned the lone assist on defenceman Rose’s third goal of the season.

“It wasn’t a pretty-looking overtime,” said interim coach Ryan Oulahen of the Battalion. “There were some missed assignments. We see that offensive ability from Simon when he has time like that. Hopefully, that’s a point in the right direction for his confidence.”

Mitchell Russell, who also had an assist, and Harrison Caines scored earlier for North Bay, which won a second consecutive game for the third time this season after blanking the host Barrie Colts 4-0 Saturday night. The Battalion moved its won-lost-extended record to 13-38-3 for 29 points, fifth and last in the Central Division.

Goaltender Joe Vrbetic, who made 41 saves at Barrie, provided 38 more before a Memorial Gardens crowd of 1,935.

The Troops were without rookie defenceman Paul Christopoulos, who received a two-game suspension for a slew-footing match penalty and game misconduct against the Colts. Ty Hollett was recalled from the affiliated junior A Pembroke Lumber Kings for the game.

Calvin Martin and Harley scored for Mississauga, 24-25-5 for 53 points, tied with Barrie for second place in the division. Edmonds faced 22 shots.

“It was a really good, gutsy effort,” said Oulahen. “What we’ve seen this weekend is a more competitive team. We won a lot of battles along the wall and blocked a lot more shots. The way we played in front of our net was so much better. I’m really happy to see the improvement in our group.

“This was a really good test for Joe. He got a lot of work last night. He’s feeling really good about himself. He just carried it over from one game to the next.”

Mississauga had the best early chance to break a 1-1 deadlock in the third period when Keean Washkurak hit the right post with an open net in the second minute, but Caines put the Battalion ahead 2-1 at 5:57 when he beat Edmonds low to the stick side from between the circles. Russell and Luke Moncada assisted on Caines’s sixth goal.

Defenceman Harley, assisted by James Hardie, replied on the power play at 11:26 with a drive from the high slot that eluded a heavily screened Vrbetic.

The visitors had the best chances through the rest of the period and into overtime. Vrbetic made three stops in the extra session, including foiling Harley off the left wing and stoning Aidan Prueter driving through the slot.

Russell opened the scoring at 12:47 of the first period, jamming the puck past Edmonds at the right post after the disc emerged from behind the net. The unassisted goal was Russell’s 21st. Martin cruised across the goalmouth and lifted a backhander over Vrbetic’s glove to tie it at 18:30.

Mississauga forged a 12-7 edge in shots in the scoreless second period. Vrbetic’s best stops came in the 14th minute when he denied Hardie, who made a strong move to the net and swatted at the subsequent rebound. Vrbetic repelled a Cole Schwindt drive off the right wing, blocked a Hardie effort from the left wing and found a Harley right-point shot through traffic.

BATTALION BULLETS: It was the fourth of six games between the teams, with the Steelheads having won the first three. They next meet March 6 at Mississauga … Moncada has a nine-game points streak during which he has five goals and eight assists for 13 points. He has an eight-game assists streak, the longest on the team this season … Russell has a three-game points streak in which he has three goals and as many assists for six points … The Battalion went 0-for-1 on the power play. Mississauga was 1-for-4 … Opening lines included Bulitka centring left winger Kyle Jackson and right winger Brandon Coe, Moncada pivoting left winger Caines and right winger Russell and Liam Arnsby centring left winger David Campbell and right winger Alex Christopoulos. Christian Stevens centred left winger Josh Currie and right winger Chad Denault … Apart from Paul Christopoulos, the Battalion was without Avery Winslow, Mason Primeau and Braden Henderson … Hollett, a fourth-round pick in the 2019 OHL Priority Selection from the Navan Grads midgets, made his OHL debut last Sunday at Ottawa in a 9-1 loss … Schwindt had an 11-game points streak in which he had eight goals and 15 assists for 23 points ended … In four games against the Battalion, Hardie has four goals and three assists for seven points … The referees were Drew Jackson and Matt Scott.