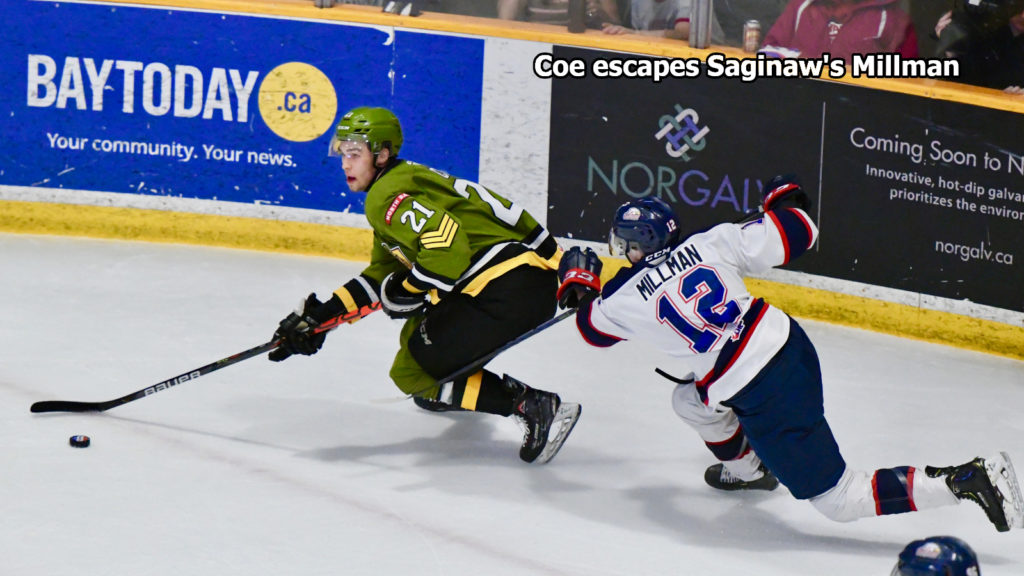 “They’re fighting for a division title, and we’re fighting for points in the playoff race as always,” Battalion interim coach Ryan Oulahen said Tuesday in summing up the stakes in the teams’ seventh meeting.

Sudbury, with a won-lost-extended record of 30-26-1 for 61 points, has a two-point lead on the second-place Barrie Colts in the Ontario Hockey League’s Central Division. The first-place club will get the second seed in the Eastern Conference playoffs regardless of conference-wide points totals.

North Bay, 14-39-3 for 31 points, is fifth and last in the division, nine points behind the Niagara IceDogs and Kingston Frontenacs, who are tied for the eighth and final conference playoff berth. The Battalion, 2-4-0 against Sudbury, has 12 games left, including visits Saturday night to the Erie Otters and Sunday to Niagara.

The Troops suffered a 6-3 home-ice loss last Sunday to the Saginaw Spirit, ending a season-high three-game winning streak that combined with a 5-4 overtime loss Feb. 13 to the visiting Sarnia Sting to produce a season-best run of four games with at least a point garnered.

“We actually like the fact that we’re getting right back on the horse here and get an opportunity in a midweek game and it’s a quick turnaround here,” said Oulahen.

While acknowledging that the Wolves are a “big, strong older team” than the Battalion, the OHL’s youngest, Oulahen noted that “there’s already a little bit of compete factor built in.” The teams met four times from Dec. 31 through Jan. 24.

“We play them a lot; we know a lot about them. Again, it’s one of those games that’s going to be about execution. Both teams know each other really, really well.”

In its winning streak, the Battalion prevailed 4-0 at Barrie on Feb. 15, defeated the Mississauga Steelheads 3-2 in overtime the next day at home and, in a stunning result, downed the visiting Ottawa 67’s, who boasted the OHL’s best record and the top spot in the Canadian Hockey League rankings, 6-2 last Thursday night.

Goaltender David Bowen, a 19-year-old in his season debut, made 26 saves in backing the Wolves to a 2-0 home-ice win Sunday over Ottawa, which had won 5-4 in overtime Friday night against the host Sault Ste. Marie Greyhounds. Matej Pekar scored in the second period, and Brad Chenier added an empty-net goal in the third against the 67’s, who were back home Tuesday to defeat Kingston 7-3.

Left winger Pekar, acquired in a Jan. 8 trade with Barrie, has 11 goals and 15 assists for 26 points in 19 games with Sudbury, including eight assists in three games against North Bay.

Left winger Chenier has three goals and 10 assists for 13 points in 16 games since a Jan. 9 trade from the Battalion for Shane Bulitka and OHL Priority Selection picks. Centre Bulitka has six goals and as many assists for 12 points in 18 games with the Troops.

Russell hasn’t skated since leaving the Ottawa game after taking a check from behind from defenceman Merrick Rippon, who has been suspended indefinitely.

The Sudbury game marks Subway Night, when fans will receive a complimentary Subway water bottle, Sarge will shoot T-shirts into the stands and two fans will compete in an intermission shootout for gift cards. A draw for gift cards will be available in the concourse, with winners drawn throughout the game. One row will receive coupons for a six-inch sub, and coupons and temporary tattoos will be awarded.