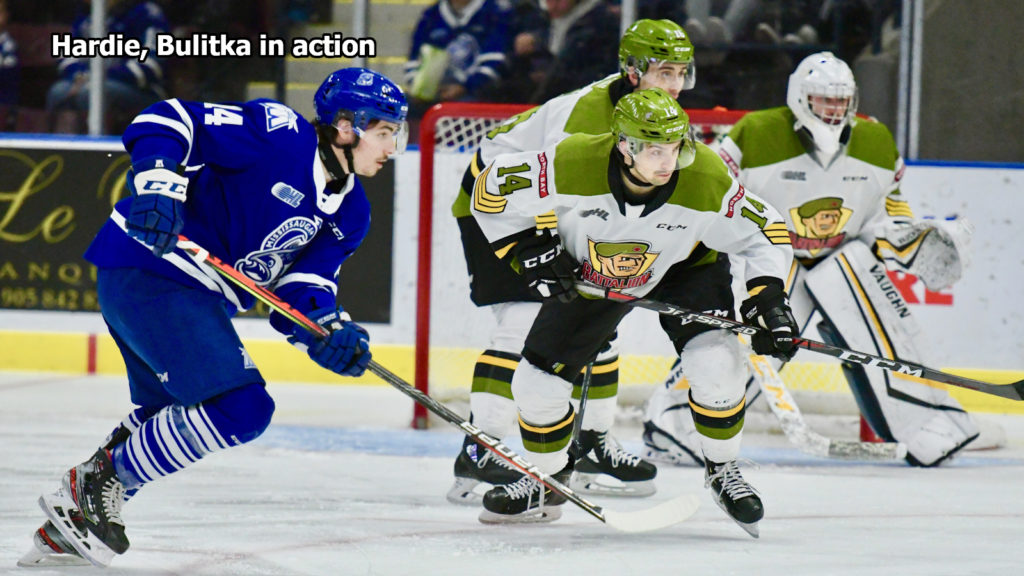 Calvin Martin, Aidan Prueter and Thomas Harley had one goal and one assist apiece, and Ty Collins scored the other goal. Cole Schwindt provided four assists and goaltender Kai Edmonds made 17 saves for Mississauga, which moved its won-lost-extended record to 22-23-3 for 47 points, second in the Central Division.

The Steelheads, who played the third of four straight home dates, have won their last three games since a 5-3 road loss Jan. 23 to the Niagara IceDogs. Mississauga is 8-2-0 in its last 10 games.

Mitchell Russell and Liam Arnsby scored for North Bay, 11-34-2 for 24 points, fifth and last in the division. Goaltender Cameron Lamour faced 46 shots before a crowd of 2,707 at the Paramount Fine Foods Centre.

Russell opened the scoring on the power play at 2:43 of the first period. Luke Moncada won a left-side draw back to Avery Winslow, who slipped the puck across to Russell for a shot that caught the upper right corner of the net for his 18th goal of the season.

Collins tied it at 8:13 as he took a pass from Prueter, who corralled Duncan Penman’s rebound off the end boards and fed Collins in front for a one-timer.

Martin connected with the man advantage at 16:19, going to the goalmouth and redirecting a pass from Hardie deep in the right circle. Martin’s 13th goal also was assisted by Schwindt.

Hardie scored what proved to be the winner at 18:25, knocking home a pass from Harley, who drove down the left wing and fed the puck across to Hardie at the right side of the crease.

Hardie hit for the only goal of the second period on his second breakaway of the frame, taking a pass from Schwindt and outracing two pursuers to backhand his team-leading 27th goal behind Lamour at 17:16. The goaltender got his right pad on Hardie’s first solo break-in, in the 13th minute.

Prueter struck at 1:41 of the third period, directing the puck at the net as Arnsby slid into Lamour, and Arnsby collected his third goal at 8:34, taking a stretch pass from Brandon Coe, cutting off the left wing to the net and ripping the puck past Edmonds. Shane Bulitka had the second assist.

Defenceman Harley completed the scoring with his 17th goal at 13:29, slipping up the middle and snapping the puck home.

The Battalion had several bones to pick, starting when Chas Sharpe upended Coe on a drive off the left wing in the 15th minute of the first period without a call. There were other chances, including when Moncada fanned on a shot in the first minute of the middle period but saw the puck sneak under Edmonds and hit iron just right of the right post.

Moncada kicked the puck out of the crease behind Lamour later in the frame, with the rubber ending up lodged behind the goaltender’s left pad on a following attempt at 11:11.

The Battalion plays host to the Kingston Frontenacs at 2 p.m. Sunday on Ontario Northland Day.

BATTALION BULLETS: It was the third of six games between the teams, with Mississauga winning all three. The next meeting is Feb. 16 at Memorial Gardens … The Battalion went 2-8-2 in January … Bulitka has a four-game points streak during which he has three goals and two assists for five points … The Battalion was 1-for-2 on the power play. Mississauga went 1-for-3 … Opening lines saw Moncada centring Bulitka on left wing and right winger Coe, Arnsby centring left winger Harrison Caines and right winger Russell and Kyle Jackson pivoting left winger Josh Currie and right winger Alex Christopoulos. Christian Stevens centred left winger David Campbell and right winger Chad Denault … The Battalion was without Simon Rose, Mason Primeau and Braden Henderson … Rose received a two-game suspension for a check from behind late in a 4-3 home-ice loss Thursday night to the Guelph Storm. There was no penalty called … Hardie has a seven-game points streak during which he has nine goals and seven assists for 16 points. In three games against North Bay, he has four goals and two assists for six points … Schwindt has a six-game points streak in which he has five goals and eight assists for 13 points, while Harley has a five-game points streak during which he has one goal and seven assists for eight points … The referees were Jason Goldenberg and Mike Marley … All 20 teams played Friday night.