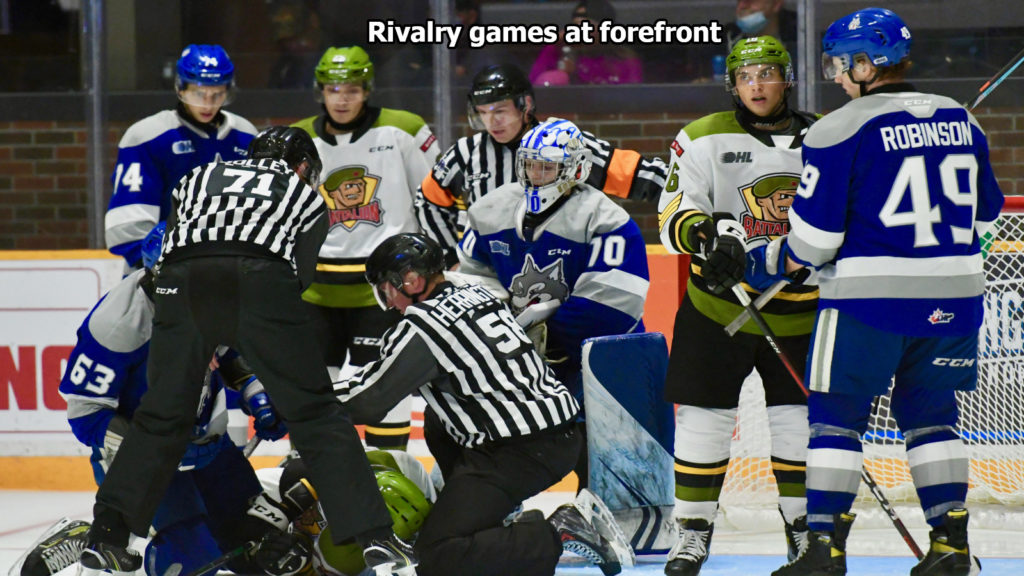 NORTH BAY, Ont. — The North Bay Battalion is three games into a learning process not only for players but also for the coaching staff, as bench boss Ryan Oulahen tells it.

“The challenge for us as coaches is going to be to learn the league again, missing a whole season, and the groups of players coming in,” Oulahen said in assessing the new campaign.

The Battalion, which hosts the Mississauga Steelheads at 7 p.m. Friday after defeating the visiting Sudbury Wolves 3-2 Monday, has a won-lost-extended record of 2-1-0 in the return to play of the Ontario Hockey League after the 2020-21 season was cancelled because of the coronavirus pandemic.

That means a double cohort of rookies, namely those players who turn 16 or 17 in the year in which the season starts, and a look at the progress made by those who were in that group when the league last played and who now are 18- and 19-year-old veterans short one season.

“It’s a 19-year-old league, we always say, but the guys were 17 when we last played,” noted Oulahen, in his first full season as head coach after terms as a player and an assistant with the Battalion. “A lot of them probably weren’t significant pieces on their teams, and those are the ones who are probably going to have breakout seasons around the league.

“So it’s going to be a lot of fun doing a lot of scouting and a lot of learning about teams and players. And then you talk about the coaches. A lot has turned around with them too.”

Oulahen said those age groups must contribute to any success the Troops hope to have. Jackson, centring Petrov and overage right winger Brandon Coe, has produced one goal and five assists, while Currie, skating with Arnsby and Alex Christopoulos, has two goals. Coe has three goals and three assists, while Russian import Petrov has scored four goals and earned one assist.

Among the rookies, including centres Dalyn Wakely and Michael Podolioukh and left wingers Owen Van Steensel, Owen Outwater and Nic Sima, who’s played right wing through three games with overager Mitchell Russell sidelined, there figures to be plenty of jockeying.

“I think it’s really going to be competitive every single night, guys fighting for roles, fighting for responsibilities, but we need those guys to make some really big steps,” said Oulahen, who included rookie rearguards Ty Nelson and Tnias Mathurin in the overview.

With three overagers, including defenceman Simon Rose, on the 23-man roster, that leaves room for a lofty 10 rookies, seven born in 2004 and three in 2005.

Another element distinguishing this season is a schedule consisting almost entirely of play within conferences. The Sault Ste. Marie Greyhounds of the Western Conference generate the most exceptions, facing Sudbury 10 times, the Barrie Colts twice and the Battalion six times, making for the Troops’ only non-conference games among 68.

“I’ve always found over the years that those are the games that we get up for, those rivalry games,” noted Oulahen. “I think it’s going to be a case where you’re going to have to do well in sort of miniseries against those opponents in our division.”

The Battalion has an unprecedented eight home-and-home sets, including three with Barrie, three with Sudbury and one with Mississauga. The Troops also have two consecutive home games against the Wolves and two straight dates at Sudbury. There also are back-to-back games at Sault Ste. Marie and at home against the Greyhounds.

“It’s going to be a unique year, but one I think we’re all looking forward to,” said Oulahen.