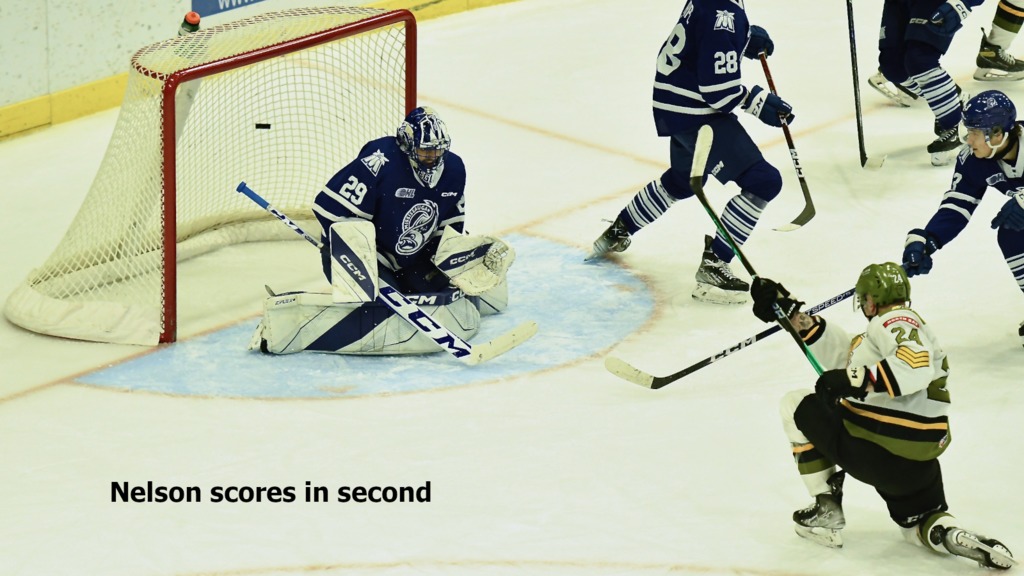 MISSISSAUGA, Ont. — Zander Veccia scored in the opening seconds of all three periods to lead the Mississauga Steelheads to a 5-4 victory over the North Bay Battalion in Ontario Hockey League action Friday night.

Luke Misa had one goal and one assist and Lucas Karmiris also scored for Mississauga, which survived a Battalion siege in the closing minutes to move its won-lost-extended record to 20-18-4 for 44 points, third in the Central Division. James Hardie provided four assists, and goaltender Alessio Beglieri contributed 28 saves.

Matvey Petrov scored one goal and added two assists, while Kyle McDonald, Ty Nelson and Pasquale Zito each had one goal and one assist for North Bay, which got 25 saves from goaltender Charlie Robertson before 1,960 at the Paramount Fine Foods Centre.

The Battalion, which suffered a second straight loss, is 29-11-2 for 60 points, first in the division. The Troops saw a nine-game home winning streak ended in a 4-3 overtime setback Thursday night to the Hamilton Bulldogs.

With North Bay having pulled to within 4-3 through 40 minutes, Veccia scored his 12th goal of the season on the power play at 1:20 of the final period for what proved to be the winner. It gave him his first three-goal game in the OHL.

Zito got the Battalion back within a goal at 15:45, one-timing the puck past Beglieri after Petrov won a race to the end boards and retrieved the disc. It was Zito’s 11th goal and his fourth in 11 games since a Dec. 12 trade from the Niagara IceDogs. Robertson left for a sixth attacker with 1:22 to play, but the Troops couldn’t find the equalizer.

Veccia replicated an early first-period strike at 19 seconds of the middle frame, giving Mississauga a 2-1 lead when he snapped the puck from the left wing on an assist by Hardie.

Misa converted on a shorthanded two-on-one rush against Nelson at 1:50 and, seconds after Nelson hit iron after the power play ended, Karmiris raced down the right wing to beat Robertson low to the glove side at 3:46 for a 4-1 lead.

McDonald used his long reach to put the puck home at the left post from behind the goal line on the power play at 12:36, collecting his 17th goal, and defenceman Nelson pinched deep to cash a pass from Zito in the right-wing corner during a two-man advantage at 17:31.

Veccia struck 32 seconds after the opening faceoff, taking a pass from Hardie on the end boards and converting from the goalmouth. Misa had the other assist.

Petrov tied it during a two-man advantage at 15:32, ripping the puck from the mid slot on a setup by Kyle Jackson, with McDonald drawing the second assist. It was the fourth consecutive North Bay goal by Petrov after he scored all three against Hamilton.

Beglieri stopped two breakaway efforts in the middle of the period, denying penalty killer Zito on a backhanded attempt with the left pad and Josh Bloom several minutes later.

The Battalion plays host to the Sudbury Wolves at 2 p.m. Sunday on Ontario Nurses’ Association Day.

BATTALION BULLETS: It was the third of six games between the teams. The Battalion won the first two, 5-2 at Mississauga on Dec. 9 and 7-3 at North Bay on Dec. 15 … In 104 games, Petrov has 59 goals and 91 assists for 150 points, tied with John Hughes and Kamil Kreps for 18th place on the franchise’s career list. Jackson, with 64 goals and 80 assists for 144 points in 161 games, is 22nd all-time, one point ahead of Luch Aquino and Mitchell Russell … North Bay went 3-for-9 on the power play. Mississauga was 1-for-4 … The Battalion was without Tnias Mathurin, Brayden Turley, Justin Ertel, Liam Arnsby and Luc Brzustowski … Ertel, who left the Hamilton game with an upper-body injury, will be sidelined several weeks … In five trades leading to the Jan. 10 deadline, Mississauga acquired six players and eight OHL Priority Selection picks while dealing three players and five picks. Centre Jack Van Volsen and left winger Justin DeZoete and four picks, including two second-rounders, came from the Peterborough Petes for centre Owen Beck while, in two separate transactions, defenceman Ethan Del Mastro and centre Luca Del Bel Belluz fetched right winger Porter Martone, centre Angus MacDonell and three picks, one of them a second-rounder, from the Sarnia Sting. Left winger Adam Zidlicky and rearguard Stevie Leskovar arrived in other deals with the Kitchener Rangers and Peterborough respectively.