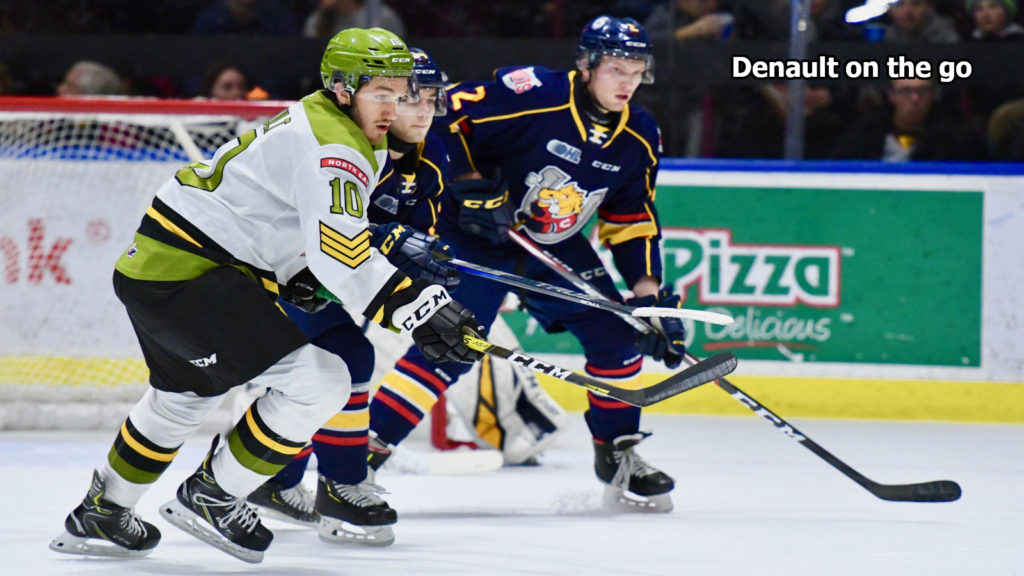 BARRIE, Ont. — Goaltender Joe Vrbetic made 41 saves for his first Ontario Hockey League shutout as the North Bay Battalion snapped an eight-game losing streak with a 4-0 victory Saturday night over the Barrie Colts.

Brandon Coe, Shane Bulitka and Josh Currie scored first-period goals and Mitchell Russell added an empty-netter in the third for North Bay, which has a won-lost-extended record of 12-38-3 for 27 points, fifth and last in the Central Division. The Troops’ previous win was a 4-2 road decision Jan. 24 over the Sudbury Wolves.

Rookie Vrbetic is the fourth goaltender in Battalion history to make as many as 40 saves in a shutout and the first since Patrick Killeen stopped 43 shots in a 4-0 decision over the Peterborough Petes at Brampton on Feb. 14, 2010.

“It feels really good for the team — we needed the big win,” said Vrbetic, who was outstanding, especially in the second period. “For me it was a good game, and I’m glad to accomplish it and I couldn’t have done it without my teammates.”

Goaltender Jet Greaves made 29 saves before a crowd of 3,369 for Barrie, which lost for the first time in three games and is 24-23-5 for 53 points, second in the division.

It was the first game in which interim coach Todd Miller ran the Barrie bench against the Battalion. Warren Rychel, who had served as head coach this season with longtime incumbent Dale Hawerchuk taking a leave of absence as he battles stomach cancer, was let go Jan. 20. The Colts are 8-2-1 since Miller took over the reins.

Coe drove to the net off the left wing, escaping from Victor Hadfield, and squeezed a backhander past Greaves’s blocker at 10:45 of the opening period. The unassisted goal was Coe’s 19th of the season.

Nick Grima directed the puck toward the net from the right-wing half boards, and Bulitka tucked it inside the right post from the lip of the crease at 17:08. It was Bulitka’s 21st goal on the season and his fifth in 15 games since being acquired from Sudbury in a trade Jan. 9.

Barrie’s Josh Nelson had a backhanded clearing attempt glance off Chad Denault’s skate to Currie, who ripped the rubber over Greaves’s glove from the left circle 46 seconds after Bulitka’s tally.

Vrbetic’s biggest stops were made against Aidan Brown on a rush to the net in the 10th minute and on Nicholas Porco in the deep slot after he took a pass from Brown in the 13th.

In the middle period, when Barrie outshot the Battalion 21-9, Vrbetic made back-to-back saves on Tyson Foerster and Jacob Frasca in the seventh minute and sprawled to deny Luke Bignell as he looked to convert a rebound in the eighth. Vrbetic foiled Ethan Cardwell in the ninth minute and was prone in the crease to block Cardwell trying to convert a loose puck at the left post in the 18th. Cardwell missed the net on a partial breakaway in the second minute.

There were no penalties in the first period, but the second frame featured a total of eight power plays, six for the Colts. They failed to capitalize after Paul Christopoulos received a questionable match penalty for slew-footing and a game misconduct at 12:43. Pacey Schlueting followed with a kneeing minor at 15:12, but the best scoring chances belonged to the Troops, as Bulitka and Luke Moncada tested Greaves with the Battalion two men short for two minutes.

Vrbetic turned away nine shots in the third period, including good chances for Cardwell, Bignell, Nelson and Porco.

Russell, who retrieved the puck on the right wing after Moncada missed the empty net, finished the scoring from a sharp angle at 19:55 with his 20th goal.

The Battalion plays host to the Mississauga Steelheads at 2 p.m. Sunday.

BATTALION BULLETS: It was the fourth of six season meetings, with each team 2-2-0. They next face off March 14 at Barrie to open a home-and-home series … The Battalion is 5-24-0 on the road … Moncada has an eight-game points streak in which he has five goals and seven assists for 12 points. He has a seven-game assists run, the longest on the team this season … The Battalion went 0-for-4 on the power play. Barrie was 0-for-9 … Opening lines featured Bulitka centring left winger Kyle Jackson and right winger Coe, Moncada centring left winger Harrison Caines and right winger Russell and Liam Arnsby pivoting left winger David Campbell and right winger Alex Christopoulos. Christian Stevens centred left winger Currie and right winger Denault … The Battalion again was without Avery Winslow, Mason Primeau and Braden Henderson … Foerster and Evan Vierling each had a 13-game points streak ended. Foerster had nine goals and 11 assists for 20 points in the run, while Vierling had seven goals and 11 assists for 18 points. Barrie acquired him in a Jan. 7 trade with the Flint Firebirds … The referees were Joe Celestin and Chris Ferreira … The Gathering Place Night at Memorial Gardens, when the Sarnia Sting edged the Battalion 5-4 in overtime Thursday night, saw 462 pounds of food collected and $486 in cash donations to the community organization.