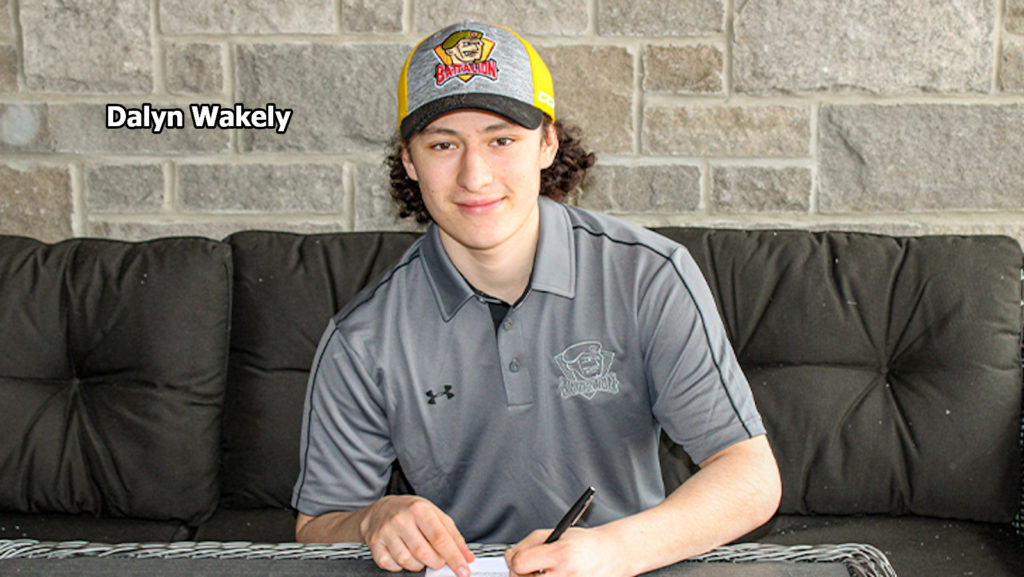 North Bay chose Wakely from the Quinte Red Devils minor midgets in the second round, 30th overall, of the OHL Priority Selection on April 4. A five-foot-11, 164-pound resident of Port Hope, Ont., the right shot scored 30 goals and earned 42 assists for 72 points with 62 penalty minutes in 36 games before adding 11 points, including four goals, in eight playoff games.

“A huge moment in my life, thanks to the North Bay Battalion,” Wakely, who turned 16 on March 5, said via text. “Ready to go to war with the boys. Big things coming!”

General manager Adam Dennis noted that Wakely “is another player who was a leader of a championship program in minor midget.”

“He plays a complete game and is one of the elite goal scorers for his age. We look forward to helping Dalyn continue in his development.”

Wakely is the second player selected this year to commit to the Battalion for next season, after defenceman Ty Nelson, the No. 1 overall choice from the Toronto Jr. Canadiens.

In other news, defenceman Braden Henderson and right winger Chad Denault have said they will attend school next year, forgoing an overage season. Henderson, of Baxter, Ont., is to attend Georgian College, while Denault, a resident of Iroquois Falls, Ont., will go to Nipissing University.

Henderson scored two goals and earned 13 assists for 15 points in 48 games last season, his third in the OHL. The Battalion acquired him and as many as seven OHL Priority Selection picks in a Jan. 6, 2018, trade with the Sarnia Sting that saw rearguard Cam Dineen go the other way. In 167 career games, Henderson had three goals and 30 assists for 33 points.

Denault scored four goals and added four assists for eight points in 35 Battalion games last season after a Dec. 4 trade from the Peterborough Petes. In 187 career games, he had 15 goals and 16 assists for 31 points.