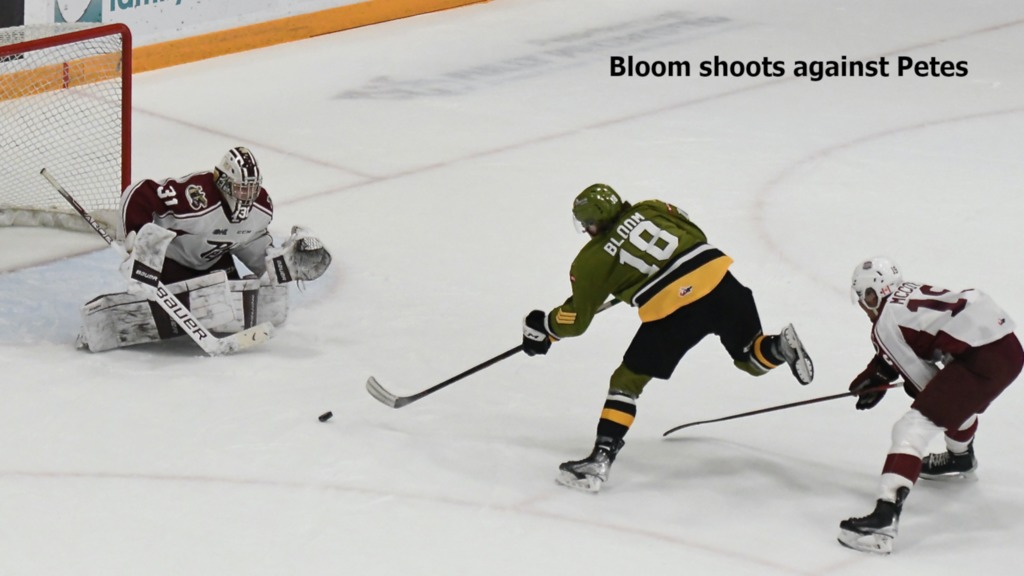 NORTH BAY, Ont. — The Cambridge Dictionary defines “home” as “someone’s or something’s place of origin, or the place where a person feels they belong.”

For the North Bay Battalion, that’s the city known as the Gateway of the North and, more specifically, Memorial Gardens.

The Battalion plays host to the Soo Greyhounds at 7 p.m. Thursday in the first of 13 games in the next 18 that are to be played on home ice.

After the date with the Greyhounds, which is The Brick North Bay Teddy Bear Toss game supported by Moose FM Radio and Country 90.5, the Battalion visits the Mississauga Steelheads on Friday night and entertains the Saginaw Spirit on Sunday.

North Bay, on a three-game winning streak, boasts a won-lost-extended record of 18-8-0 for 36 points atop the Central Division. The Troops have played 18 of their 26 games on the road, producing a record of 12-6-0, while playing to a 6-2-0 home mark.

“We’ve been able to have some success here lately and climb up in the standings,” coach Ryan Oulahen said Wednesday. “That means we’re going to get everybody’s best game, especially early on in games. They’re going to be ready for us.”

The Battalion has only 16 road games left, compared with 26 at its home arena. Ten of the 16 away games are against divisional opponents, the exceptions being two visits to the Oshawa Generals and single trips to face the Ottawa 67’s, Saginaw, Flint Firebirds and Sarnia Sting.

The Battalion, which hit the road for five games to start the season because a Pinty’s Grand Slam of Curling event took over the Chippewa Street facility, is coming off another run of five away dates in which it went 3-2-0.

Goaltender Dom DiVincentiis won the most recent two, 4-2 over the Kingston Frontenacs last Friday night and 3-0 over the Peterborough Petes the next night, earning his first shutout in 44 career games and being named the OHL’s Goaltender of the Week for the period ended Sunday.

DiVincentiis, a scratch for the three previous games while in concussion protocol, backed up Charlie Robertson in a 7-4 verdict over the Sudbury Wolves last Wednesday night.

The three wins saw the Battalion return to the Canadian Hockey League Top-10 rankings with an honourable mention. After scoring two goals at Sudbury, Josh Bloom had three goals, including an empty-netter, at Kingston, while Wyatt Kennedy, Kyle Jackson and Dalyn Wakely scored at Peterborough, with Bloom earning an assist on Jackson’s team-leading 16th goal of the season.

Soo, 8-10-8 for 24 points, fifth and last in the West Division, has won one of nine games that have gone beyond regulation time. Kalvyn Watson scored his fourth goal of the game 10 seconds into overtime for a 4-3 home-ice victory last Friday night over Saginaw, giving the Greyhounds a 1-4 won-lost record in overtime. They are 0-4 in shootouts.

Watson followed up with a goal in Soo’s last game, a 5-3 win Sunday over the visiting Owen Sound Attack. The second-leading points producer on the team, he has 12 goals and 13 assists for 25 points in 26 games.

Fans at the Soo game can buy a Brickley The Bear Teddy Bear for $20, with proceeds going to the Children’s Miracle Network. In addition, $10 will be donated to the North Bay Santa Fund. Fans also can bring their own new Teddy Bear wrapped in a clear plastic bag. Further information will be available at The Brick North Bay table in the main lobby. There also will be an auction for an autographed Battalion stick.