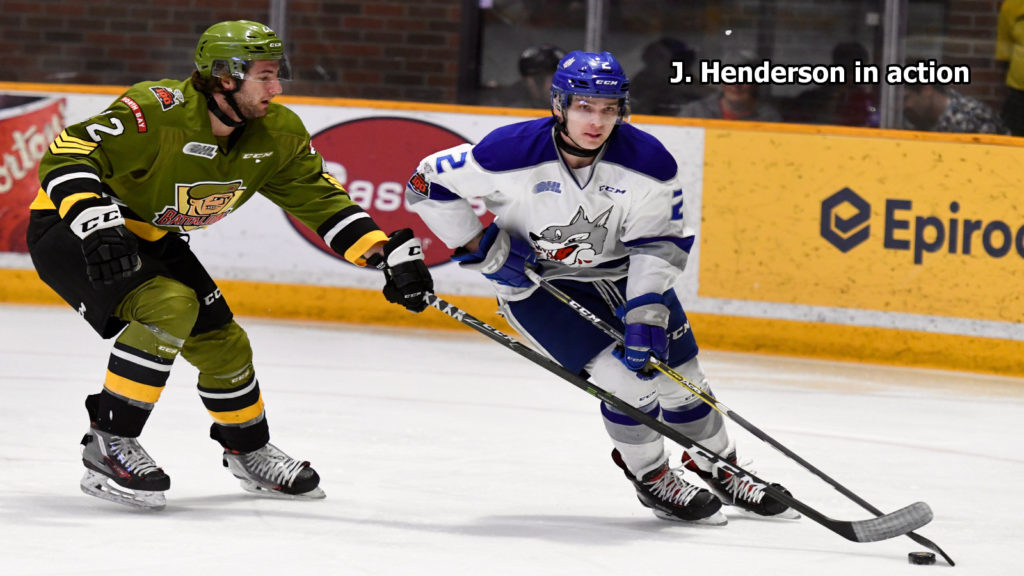 NORTH BAY, Ont. — Dawson Baker scored the first two goals to spark the Sudbury Wolves to a 4-2 victory Thursday night over the North Bay Battalion, which took a blow to its playoff positioning aspirations in its last home game of the Ontario Hockey League’s regular season.

Nolan Hutcheson and Cole Candella also scored for Sudbury, which has a won-lost-extended record of 16-38-9 for 41 points, last in the Central Division, Eastern Conference and league. Goaltender David Bowen, in his third OHL game, earned his first win with 36 saves in the opener of a home-and-home set.

Adam Thilander scored both goals for North Bay, 28-26-10 for 66 points, third in the division and sixth in the conference. The Niagara IceDogs downed the visiting Flint Firebirds 8-2 and moved one point past the idle Oshawa Generals into fourth place in the conference with 70 points. Niagara and Oshawa both have a game in hand on the Battalion, which has four games left to play.

Goaltender Christian Propp faced 27 shots before 2,455 in the last game at Memorial Gardens until at least March 29 and a playoff date. The Mississauga Steelheads, who outlasted the host Peterborough Petes 8-7 to eliminate the Petes from playoff contention, are eighth in the conference, one point behind the idle Ottawa 67’s and three behind North Bay.

“I thought it was a really disappointing loss,” said coach Stan Butler, whose Troops are ceding their home rink to the World Women’s Curling Championship. “You’ve got to give Sudbury credit. They just outworked us the whole game, and our guys have got to realize that you’ve got to play 60 minutes. I thought we played about 20 minutes, and when you only play 20 minutes you’re not going to win a hockey game.”

The Battalion, which trailed 3-0 at the second intermission, pulled within a goal as Thilander tallied at 6:28 and 13:22 of the third period. With the teams skating four a side, he took a diagonal pass from Jesse Saban to break Bowen’s shutout bid, roofing the puck into the left side of the net. Luke Burghardt had the other assist.

Thilander then got the puck from Brandon Coe coming off the end boards and stepped from the top of the right-wing circle to snap the disc behind Bowen. Nick King drew the second assist on defenceman Thilander’s 12th goal of the season.

Brad Chenier spun in the slot and forced a solid right-pad save from Bowen in the 16th minute before defenceman Candella completed the scoring at 16:20 on a slap shot from the right point. Kirill Nizhnikov and Blake Murray provided assists.

A melee erupted at 19:08, with Sudbury getting a power play because of a double minor for roughing to Riley Bruce. The only fighting majors among seven penalties went to Chenier and Liam Ross.

Baker was credited with the first goal at 6:52 of the opening period, seven seconds after a power play ended, when his shot deflected off at least one other player before trickling under Propp. Emmett Serensits, who may have directed the puck past Propp, and Kyle Rhodes were awarded assists.

Candella fired the puck from the right circle off the left post in the 12th minute, with Thilander sweeping it away from Propp’s crease. Referee Stacy Jackson went to video review to confirm there was no goal.

Baker scored again at 5:43 of the second period, taking a cross-ice pass from Serensits and one-timing the puck into the open net from the left side. It was Baker’s fifth goal.

Hutcheson scored shorthanded at 12:09, getting a breakaway pass from Macauley Carson and, with King in pursuit, racing in on Propp to score a seventh goal.

The teams complete the home-and-home series at 7:05 p.m. Friday. The game can be seen live in North Bay on YourTV Channels 12 and 700 and heard on Country 600 CKAT.

BATTALION BULLETS: The Battalion honoured its three overagers, defencemen Bruce and Saban and right winger Jake Henderson, each of whom received a painting by Jack Lockhart. Video highlights of each player were shown … On Bruce Power Night, one fan won a new iPad in a mix-match contest … The Battalion is 5-2-0 against Sudbury this season … In seven games against the Wolves, Burghardt has six goals and six assists for 12 points … The Battalion went 0-for-5 on the power play. Sudbury was 0-for-4 … Opening lines featured Matthew Struthers centring left winger Burghardt and right winger Justin Brazeau, Patrick Brown pivoting left winger Adam McMaster and Henderson and Luke Moncada centring left winger Chenier and right winger Coe. Centre Rhys Forhan and right winger Andy Baker had various linemates … The Battalion, which dressed seven defencemen, scratched Daniel Walker, Kurtis Evans and Kyle Potts … McMaster returned to the lineup after missing four games with an upper-body injury suffered Feb. 24 in a 4-2 loss at Niagara … In seven games against North Bay, Murray has four goals and as many assists for eight points … Sudbury’s Drake Pilon had scored five goals in the previous three games … Bowen, who turned 17 on Nov. 15, was a 13th-round pick in the 2016 OHL Priority Selection from the Markham Islanders minor midgets … Mike Marley was the other referee.