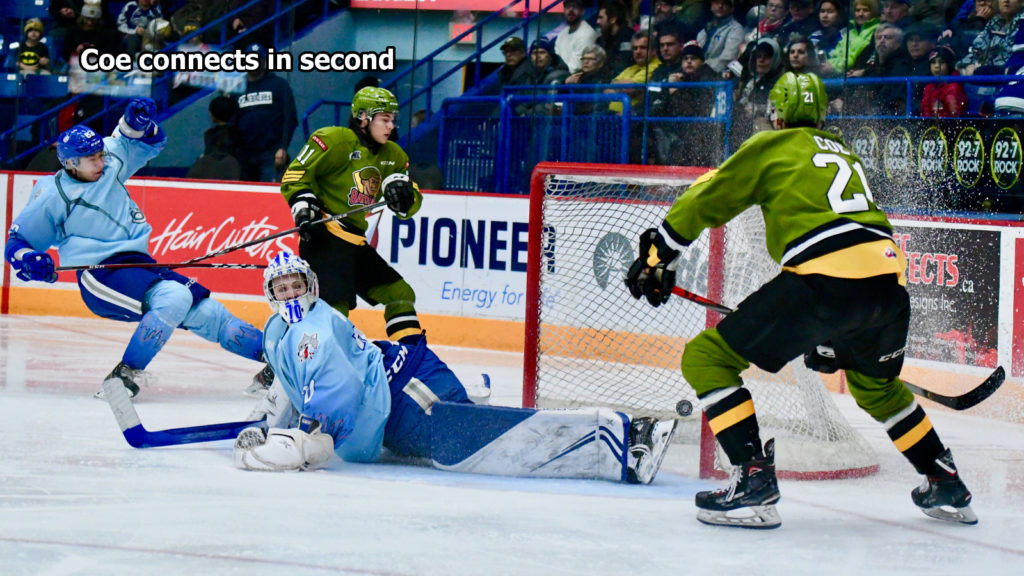 Chase Stillman provided two goals and one assist, David Levin and Adam Samuelsson each had one goal and one assist and Macauley Carson and Isaak Phillips scored the other goals for Sudbury, which improved its won-lost-extended record to 21-18-1 for 43 points atop the Central Division.

Shane Bulitka made his first appearance against his former club after being acquired Thursday in a trade for Brad Chenier, who finished serving a three-game suspension handed down after he drew a major and a misconduct for checking from behind in a 6-1 Battalion loss at Barrie last Saturday night.

Sudbury, which led 1-0 after 20 minutes, outscored the visitors 5-1 in the second period, sparked by Byfield on a two-man advantage at 20 seconds. Levin and Pekar assisted as Byfield connected from the top of the left-wing circle.

Coe replied at 4:46 after Liam Arnsby slipped the puck to the right corner of the crease for the conversion. Braden Henderson also assisted on Coe’s 15th goal of the season.

Byfield snapped the puck home from the right circle off a three-on-one rush at 7:04 for what proved to be the winning goal. It was Byfield’s team-leading 25th goal. Stillman then collected his 11th goal on a backhand-to-forehand deke from close range at 8:28.

Levin one-timed the puck off a Pekar pass on an odd-man rush at 18:03, and defenceman Samuelsson struck 25 seconds later, putting a left-point slap shot through traffic. Originally signaled as no goal, the call was reversed upon video review when it became clear that the puck deflected off defender Simon Rose’s head.

Carson got behind the defence to steer the puck between Lamour’s legs at 8:30 of the final period before Christopoulos hammered his fourth goal from the left circle at 14:07, with Rose drawing the sole assist. Defenceman Phillips drove to the net and converted a cross-crease pass from Byfield at 16:05 to complete the scoring.

The Battalion was handed a two-man advantage for two minutes at 11:36 but failed to mount a serious threat.

Stillman scored in the first period 42 seconds after the opening faceoff, converting a Byfield pass at the right lip of the crease. Pekar had the other assist.

The rest of the period saw the Battalion handed four penalties to Sudbury’s one, with the Wolves receiving a two-man advantage for 1:07 after Kyle Jackson and Nick Grima went off late in the frame. Fifty-four seconds of the two-man numerical edge carried into the second period. The Sudbury penalty went to Samuelsson, for crosschecking when he dumped Bulitka into Weeks’s net at 6:59.

The Battalion visits the Kitchener Rangers at 7:30 p.m. next Friday to open a two-game road trip. The game can be seen live in North Bay on YourTV Channels 12 and 700 and heard on Country 600 CKAT.

BATTALION BULLETS: The Battalion wore green-based sweaters and socks, as Sudbury donned pale blue garb designed as physician-themed uniforms, including depictions of stethoscopes, which were auctioned off, with proceeds going to the purchase of new MRI scanners for Health Sciences North … It was the teams’ fourth of eight meetings, with the next scheduled Jan. 23 at North Bay … The Battalion was 0-for-8 on the power play. Sudbury went 1-for-6 … Opening lines included Luke Moncada centring Bulitka on left wing and right winger Coe, Arnsby centring left winger Jackson and right winger Mitchell Russell and Mason Primeau pivoting left winger Harrison Caines and right winger Christopoulos. Josh Currie centred left winger David Campbell and right winger Chad Denault … The Battalion was without Pacey Schlueting and Avery Winslow, who was acquired from the London Knights before the noon Friday trade deadline … Among the missing for Sudbury was Nolan Hutcheson … Byfield has a six-game points streak dating to before his time with Canada at the World Junior Championship in the Czech Republic. He has eight goals and nine assists for 17 points in the run … In four games against North Bay, Levin has three goals and five assists for eight points, while Carson has three goals and four assists for seven points … The referees were Jason Faist and Anthony Tapper.