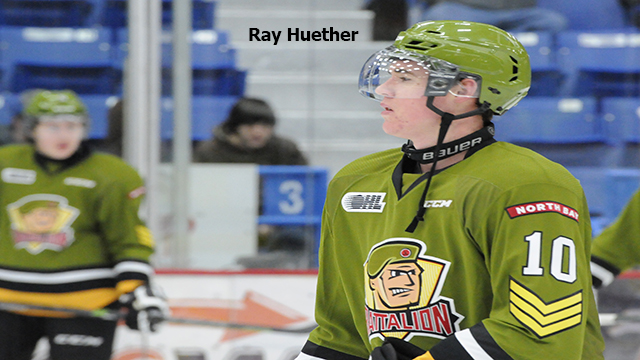 BARRIE, Ont. – David Sherman’s goal at 8:08 of the third period proved the winner as the North Bay Battalion downed the Barrie Colts 4-3 Saturday night, pulling into a tie with the losers atop the Ontario Hockey League’s Central Division.

Zach Bratina, Nick Paul and Ray Huether also scored for the Battalion, which improved its won-lost-extended record to 6-2-3 for 15 points and holds two games in hand on Barrie.

Goaltender Evan Cormier faced 21 shots for North Bay, playing its fourth road game of the season and second in two nights after a 6-2 win Friday night over the Niagara IceDogs.

Joseph Blandisi, Cordell James and C.J. Garcia scored for Barrie, 7-5-1. Goaltender Daniel Gibl made 27 saves before a crowd of 3,337.

Bratina opened the scoring at 6:48 of the first period after he intercepted an attempted breakout pass by Brandon Prophet, the last man back, and broke in alone on Gibl, beating the goaltender with a forehand deke. The goal was Bratina’s sixth of the season.

Blandisi replied on the power play at 16:05. Cormier stopped Rasmus Andersson’s shot from the high slot, but the rebound went to Blandisi, who converted from a sharp angle to Cormier’s left.

Paul’s team-leading 10th goal restored the Battalion’s lead at 11:11 of the second period as he snapped a loose puck over Gibl’s right shoulder. Bratina and Mike Amadio, who earned the lone assist, did yeoman work on the end boards to set up the goal.

The Colts managed only two shots in the frame, with their best chance not counting toward that total as Blandisi fired the puck off the right post on a shorthanded rush down the left wing.

Miles Liberati drilled a shot off the left post in the fifth minute while Gibl dealt with several bodies in front, and Bratina and Brett McKenzie were among the others who tested Gibl, who faced nine shots.

Huether made it 3-1 at 2:33 of the third period, beating Gibl high to the stick side from the right circle. The goal was Huether’s second.

James brought Barrie within a goal at 5:05. Roy Radke’s shot from the right wing caromed off defender Marcus McIvor and landed in the slot, where James capitalized.

Sherman then scored his second goal of the season and in two games. He emerged from the left wing to pitch a backhander behind the screened Gibl. Mark Shoemaker drew the only assist.

Defenceman Garcia connected with the man advantage at 18:33, chopping a shot from the left point that eluded Cormier after hitting defender Brenden Miller.

Gibl went the bench for a sixth attacker with 1:18 to play, but the Colts failed to score despite storming the Battalion zone while Bratina lay at the other end of the ice after suffering a broken tooth from a skate boot to the face.

The Battalion hosts the Belleville Bulls at 7 p.m. Thursday.

BATTALION BULLETS: It was the teams’ third meeting and the first at the Barrie Molson Centre. The Colts won 5-4 in overtime Sept. 26 in North Bay’s season opener before the Battalion prevailed 4-1 on Oct. 13 as Paul scored a third-period hat trick … The Battalion is 5-0-1 within the division … Rookie Cormier saw his second action of the season after a 3-2 overtime loss Oct. 9 to the visiting Owen Sound Attack … The Battalion was 0-for-3 on the power play. Barrie, which debuted a set of vintage-style sweaters, went 2-for-3 … Opening line combinations featured Paul centring left winger Mike Baird and Amadio on right wing, McKenzie centring left winger Bratina and right winger Alex Henriksson and Huether skating between Jared Steege on left wing and right winger Mathew Santos. Wingers Owen Green and Sherman had various centres as the Battalion dressed 11 forwards and seven defencemen … North Bay scratched Riley Bruce, Zach Poirier, Hampus Olsson and Calvin Gomes … Barrie scratched Mackenzie Blackwood, Josh Carrick, Michael Webster and Brendan Lemeiux, who received a match penalty for deliberate injury in a 5-4 road win Friday night over the Kingston Frontenacs … Defenceman Prophet made his Colts debut after a trade from the Saginaw Spirit … The referees were Sean Reid and Tom Sweeney.