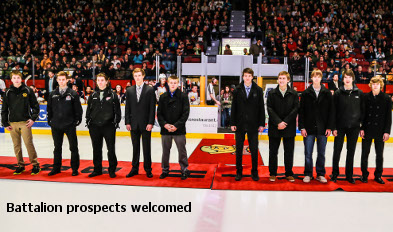 NORTH BAY, Ont. – The North Bay Battalion gave some of its newest recruits a taste of life with the Ontario Hockey League club Sunday.

Ten of the 15 players chosen by North Bay in the OHL Priority Selection on Saturday attended the second game of the Battalion’s Eastern Conference semifinal series with the Barrie Colts.

After getting a tour of Memorial Gardens, the group was introduced in a pregame ceremony, receiving a warm reception from the crowd of 4,151 which saw the Battalion defeat the Colts 4-1 to a take a 2-0 lead in the series, which resumes at Barrie at 7:30 p.m. Tuesday.

“I was surprised to be picked, but at the same time I was happy and glad North Bay had the confidence to pick me in the first round,” said Poirier, a resident of Mountain, Ont., who turns 16 on May 12. “It’s a nice rink, and I talked to some of the fans and they seem to be really behind the team.”

Sherman was a second-round choice from the Toronto Jr. Canadiens minor midgets. A left winger from Mississauga who turns 16 on May 17, Sherman saw the Battalion play when it was based in Brampton.

“I had seen guys like Matt Duchene and Cody Hodgson. It’s pretty cool up here, and there weren’t this many people at the games in Brampton.”

Sherman said he was determined to take in all he could.

“This is an opportunity only a few guys get to have. Hockey is big here in a small town. It’s a great atmosphere, and everyone seems friendly. I’ve been stopped by some people here already. I was excited to come up here. I walked around the arena; it’s a bit old-school.”

Left winger Morrison was selected in the third round from the York-Simcoe Express minor midgets.

“Since a young age, it’s been my dream to get to the OHL,” said the Aurora, Ont., resident who turns 16 on Aug. 27. “It’s a great organization here with great fans, and this is a good atmosphere. I didn’t think I’d be here. This is great.”

Morrison said he believes his skill set will be a good fit with the Troops.

“I believe I can play a similar game to what the Battalion plays. They have great coaches and great systems, and I believe I can adapt. I can bring size here. I’m a physical player and use my speed to get to loose pucks.”

Right winger Moore is a resident of Indian Trail, N.C., southeast of Charlotte. He was chosen in the fifth round from the Toronto Red Wings minor midgets. Moore’s older brother, Bryan, is in his second season as a right winger with the Sault Ste. Marie Greyhounds. He joined the Sarnia Sting in 2012-13 after two seasons with the Sioux Falls Stampede of the United States Hockey League.

“My brother played in the USHL two years ago and he told me how much better the OHL is than the USHL, and that got me motivated,” said the younger Moore, who turned 16 on Jan. 20. “I love it up here. The fans are great, and the arena is nice.”