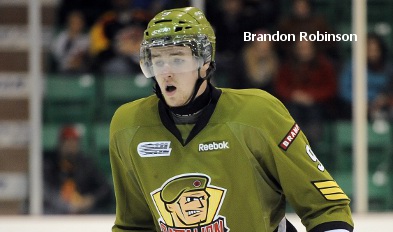 BRAMPTON, Ont. – The Brampton Battalion, which has lost its last two games, took a detour in preparation for its first meeting of the Ontario Hockey League season with the Ottawa 67’s, at 2 p.m. Sunday at the Powerade Centre.

“We know what we can do when we play our game,” said left winger Brandon Robinson, who scored two goals and added one assist in a 4-3 road loss Friday night to the Sudbury Wolves. “It’s important for us not to let the last two games affect how we play Ottawa on Sunday.”

The Battalion took advantage of the game at Sudbury to overnight in North Bay, which the club will call home starting next season, and practise at Memorial Gardens, where more than 300 fans watched the on-ice session.

The Troops’ last visit to the Northern Ontario centre was Oct. 27, 2001, for a date with the North Bay Centennials, who became the Saginaw Spirit for the 2002-03 season.

Jay McClement scored on a penalty shot in the final minute of the third period to force overtime, and the teams settled for a 2-2 tie. Kurt MacSweyn scored the other Battalion goal, but the game may be most memorable for a spirited fight between Paul Flache and his twin brother, Peter, of the home side.

Ottawa, which lost 5-2 Saturday night to the host Barrie Colts, has a won-lost-extended record of 11-27-3 for 25 points, fifth in the East Division.

“We haven’t played them yet this year, but we know it’s important to get on them in the first 10 minutes and take control,” said Robinson. “We want to take them out of the game early by playing our style.”

Centre Tyler Graovac, another Brampton resident who led the 67’s with 21 goals, was traded Saturday to the Belleville Bulls for right winger Sergey Kuptsov, a second-round and a conditional seventh-round pick in the 2014 OHL Priority Selection and a third-rounder in 2015.

“Every team in the league has their own top guys,” noted Robinson. “We need to play them as we would any other team: take away their time and space with the puck and force turnovers.”

Said Robinson: “For us it’s about sticking to our game plan. It doesn’t matter who’s on the other side of the ice; when we play our style, we know we can be successful.”

The Battalion, 19-16-6 for 44 points, is third in the Central Division. Rookie left winger Blake Clarke, the team’s leading scorer with 13 goals and 21 assists for 34 points in 41 games, had a seven-game points streak snapped at Sudbury as the Troops mounted a rally from a 4-0 deficit with three third-period goals but couldn’t get the equalizer.

“Our line put it together in the third period,” said Robinson, who skated with centre Patrik Machac and right winger Brendan Childerley. “We wanted to be a big part of the comeback and we were, but unfortunately we fell short at the end.”

The Troops have been without right winger Barclay Goodrow and centre Jamie Lewis for three games since they suffered shoulder and knee injuries respectively in a 5-4 loss via shootout last Sunday at the hands of the host Mississauga Steelheads.

Apart from Ottawa, the only teams that the Battalion has yet to face this season are the Plymouth Whalers and Kitchener Rangers, but both play in the Western Conference and are scheduled against the Troops just twice each.