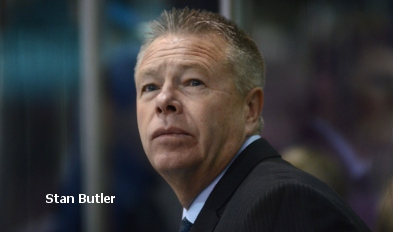 BRAMPTON, Ont. – Stan Butler, the Brampton Battalion’s director of hockey operations and head coach since its inception, is proud of the team’s accomplishments over the last 15 seasons.

“I say to people all the time that, in junior hockey, you’re taking adolescents and turning them into men,” said Butler, who will relocate to North Bay with the Battalion for the 2013-14 Ontario Hockey League campaign.

“Not every kid is going to go on to the National Hockey League, but you hope that the time that they spend with your organization is going to allow them to be successful at anything they do. When you see where the guys who have come through your program end up when they’re done, it really makes a difference.”

In terms of on-ice performance, some have said that, despite qualifying for the playoffs in 13 of 14 seasons since the expansion year of 1998-99, the Battalion has come up short.

“There are times that people may have felt that we haven’t done as well as we could have, and I can agree with that to a certain extent,” said Butler, “but I think for the most part we’re a very consistent team from year to year.”

The Battalion developed an organizational culture marked by diligence and discipline. From the front office to the players, the expectations have been that hard work yields results, both on the ice and in the classroom.

“I’d like to think that leadership starts at the top,” said Butler. “I think our owner, Scott Abbott, is smart and stable for the organization and, from the top down, what we’ve really tried to instil is a hardworking culture with our team.

“To a man, I’m proud of the kids for how hard they’ve worked. We didn’t have any trouble off the ice or at school. They came to practice every day and worked hard in the weight room and conducted themselves in a professional manner.”

“Stan is one of the finest coaches in the Canadian Hockey League,” said Abbott. “I understand that he’s had his detractors. I don’t understand where they’re coming from, and I don’t think they properly understand either hockey or the place of the OHL in it.”

Butler’s teams generally have been built from the back end out, and their style has reflected a dedication to defence. Suggestions that the longtime coach’s tactics embody the trap, however, simply are wrong.

“We’re always going to be a hardworking team that’s responsible defensively,” said Butler. “People say we’re a defensive-minded team, but I’d love for us to score 300 to 350 goals a year. I’d argue with anyone, though, who says that we don’t aggressively forecheck. We play a pro-style game, forechecking hard while maintaining hard backside pressure. There are 28 or 29 teams in the NHL that use the same kind of system.

“That’s what people need to understand. Even the superstars at the next level play a two-way game. That’s why Cody Hodgson can play the first-line centre position with Buffalo (Sabres) or Matt Duchene can play on the top line with Colorado (Avalanche). Not only do they have the skill, they have what it takes in their all-round game to be there.”

Butler acknowledged that the move to North Bay from Brampton and the Toronto area, where the Troops have received little media attention, will mean changes beyond geography.

“The biggest thing for next season is the excitement for the players. We’re moving into a smaller community with a daily newspaper and radio coverage, but with that come expectations that the players may not be used to, and they’ll bring accountability.

“It’s unfortunate that the fans in Brampton won’t directly benefit, but we hope that the fans here are Battalion fans and will continue to be when we’re in North Bay. I know that, from both the players’ standpoint and my standpoint, they’ll always be our fans.”