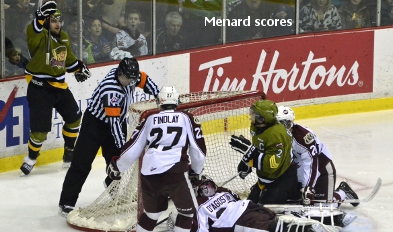 BRAMPTON, Ont. – The Brampton Battalion pulled down the curtain on its final regular season and on the Peterborough Petes’ playoff hopes Sunday.

Francis Menard scored one goal and added an assist to pace the Battalion to a 5-2 Ontario Hockey League victory before a season-high crowd of 3,432, denying the resurgent Petes a playoff berth.

Matt MacLeod, Mike Amadio, Brendan Childerley and Barclay Goodrow, into an empty net, also scored for the Battalion. Goaltender Jake Smith made 24 saves for the Troops, who finished with a won-lost-extended record of 34-25-9 for 77 points, second in the Central Division and fourth in the Eastern Conference.

The Battalion, which will relocate to North Bay next season, opens a best-of-seven conference quarterfinal against the fifth-seeded Sudbury Wolves at home at 7 p.m. Thursday.

The Petes, who would have qualified for the postseason with a victory, finished 26-35-7 for 59 points, fourth in the East Division and ninth in the conference. The Kingston Frontenacs defeated the visiting Ottawa 67’s 5-1 to reach 60 points, tied with the idle Mississauga Steelheads and winning the tiebreaker for the seventh seed.

The Petes, who saw the end of a four-game winning streak, went 18-12-3 after Jody Hull replaced Mike Pelino as head coach in December, charging into playoff contention from 16 points off the pace.

“I feel bad for Peterborough,” said coach Stan Butler, whose Troops went 3-1-0 in the teams’ season series. “Jody did a great job there, but they probably ran into the wrong team at the end of the season.

“We had probably as much at stake in this game as they did, with it being our last regular-season game ever. D’Agostini played great, but I just feel for their whole team. It was a bittersweet win. I was happy we won but felt bad because of the comeback they made to get back in the race.”

The Battalion, leading 2-1 through 40 minutes, got the eventual winning goal from Amadio at 1:37 of the third period. He took a backhanded pass from Nick Paul and swept the puck behind D’Agostini from the left side.

With Mathew Santos serving a hooking penalty, Childerley scored shorthanded at 8:26, snapping a screened shot that deflected off defender Steven Trojanovic’s stick high into the net.

Findlay replied on the same power play 38 seconds later, taking a pass from Nick Ritchie and beating Smith from the inner edge of the left-wing circle.

Goodrow, feeding Menard in front of the open net and getting the puck back from him, completed the scoring at 19:50. It was Goodrow’s team-leading 38th goal of the season.

Clarke opened the scoring at 16:14 of the first period, deftly redirecting a Derek Mathers pass off a give-and-go on a two-on-one rush.

Menard, a former member of the Petes, tied it on the power play at 5:33 of the second period. Zach Bell, receiving the puck from Dylan Blujus, fired a shot off the right post that went to Menard at the left of the net. He threw a backhander into the crease that glanced off the paddle of the sprawling D’Agostini, who had robbed Menard on a similar chance seconds earlier.

“That quick goal in the second period gave us a lift,” said Childerley. “We were able to ride that momentum through the rest of the game.”

MacLeod connected for his 19th goal at 16:45, gathering the rebound of a Blujus shot in the slot and beating D’Agostini over the glove.

Blake Clarke had a breakaway in the 20th minute but was hampered by a pursuing defender and failed to get off a quality shot. Clarke, who finished with 19 goals, missed the empty net with a clear shot from close range in the final minute of the game.

BATTALION NOTEBOOK: The previous season high for attendance was 2,867 for a 2-1 loss Feb. 24 to the Kitchener Rangers … The Battalion finished 21-10-3 at home. Peterborough was 11-18-5 on the road … The Troops, who went 27-14-7 within the conference, were 6-2-0 in March. They won their final four games and six of their last seven … Brampton, which posted an all-time won-lost-tied record of 33-17-2 against Peterborough, went 468-500-52 over 15 seasons … The Battalion was 1-for-1 on the power play. Peterborough went 1-for-2 … Blujus’s helper on Menard’s goal was his 44th power-play assist, tying Jason Maleyko for sixth place on the Battalion’s career list … Goodrow, who has 94 goals and 68 assists for 162 points, 10th on the club’s all-time list, played his 250th game … Menard was acquired from Peterborough on Jan. 8 for third- and sixth-round picks in the 2014 and 2015 OHL Priority Selections respectively … Overagers Menard, Childerley and Findlay each scored in his final regular-season game … The Troops scored five shorthanded goals on the season, including four by Goodrow … Opening line combinations included Jamie Lewis centring left winger Goodrow and right winger Amadio, Patrik Machac pivoting left winger Clarke and right winger MacLeod and Paul centring Menard on left wing and right winger Santos. Nicholas Foglia centred Calvin Gomes on left wing and right winger Childerley … It was announced Sunday that North Bay radio station CKAT 600 is to broadcast all games of the playoff series between the Battalion and Sudbury. A 30-minute pregame show will precede the play-by-play calls of Bob Coles … The referees were Ryan Hutchison and Sean Reid. The linesmen were Dave Pfohl and Frank Rocca.