Battalion’s Goodrow on brink of 300 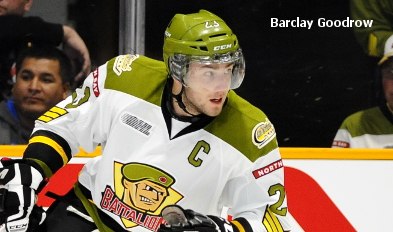 NORTH BAY, Ont. – Barclay Goodrow, the North Bay Battalion’s franchise leader in games played, is on the verge of another milestone.

When the Battalion hosts the Windsor Spitfires at 7 p.m. Thursday, Goodrow will skate in his 300th Ontario Hockey League game.

“I can’t believe we’ve got here,” said Goodrow, an Aurora, Ont., resident. “It’s crazy how fast time has flown by. I can remember my first couple of games in the league. Now it’s 300 games later, and I’m still here.

“It’s been a blast. I’ve enjoyed every minute of it. I’ve been lucky to have spent every game with a great organization, and the Battalion has done nothing but great things for me.

“I’ve spent a quarter of my life here. It’s crazy to look at it like that. I was in Grade 10 when I was chosen by the Battalion, and now I’ve been out of high school for three years. I can remember each and every part of my time in the league.”

In his second campaign as captain, Goodrow and fellow right winger Matt MacLeod join graduated defenceman Cameron Wind as the only Troops to have played five seasons.

“There’s a pretty homey feel throughout the organization,” said Goodrow, who broke Wind’s franchise record of 291 career games in a 6-2 road loss to the Peterborough Petes on Jan. 11. “Everyone feels welcome and they want to play here. You could see at first with Wind, and now with MacLeod and me, that we’ve enjoyed our time with the Battalion. It says a lot about how things are run here.”

Goodrow, who turns 21 on Feb. 26, was chosen by the Brampton Battalion in the first round of the 2009 OHL Priority Selection from the York-Simcoe Express minor midgets. He played 63 games in 2009-10, scoring six goals and earning 13 assists for 19 points, with what remained of a squad that had gone to the OHL Championship Series the previous season, losing in five games to Windsor.

“We had a young forward group then. We had a veteran defence and a goalie in Patrick Killeen that we relied on heavily. We didn’t score many goals, but it was good to come in and have a chance to play a lot. I learned a lot when Cody Hodgson came back. He was great to me, both as a player and a leader. I learned a lot playing with guys like Sam Carrick and Sean Jones.”

Goodrow’s name is prominent on franchise lists of all-time offensive leaders. He holds the record for game-winning goals with 27, while his 119 goals are second to Wojtek Wolski’s 130, and Goodrow is tied with Wolski with a record nine shorthanded goals. Goodrow’s 41 power-play goals are fourth in franchise annals, and his 210 points are fifth.

“When you play 300 games you’ll find your name near the top of a lot of lists simply because you’ve played so many games,” allowed Goodrow, “but it is cool to be mentioned with so many of the guys who came before me.”

He attended the rookie camp of the National Hockey League’s Detroit Red Wings last September but opted not to pursue an invitation to the training camp of the Grand Rapids Griffins, Detroit’s American Hockey League affiliate.

“I definitely think I made the right decision. Guys I know like Ryan Murphy and Daniel Catenacci have moved on to the pros, but I’d much rather be playing the minutes I get with the Battalion every night than playing fourth-line minutes in the pros. I realized my situation was a lot different from other guys, but I’m having a great season here with my best friends. The first season here in North Bay has been great, and we’re having a lot of experiences here we never had in Brampton.

“Everybody takes a different route to their next destination, and I’m hoping this is the route that works out best for me. The OHL is a great league to play in.”

Barring injury, illness or suspension, Goodrow has 14 regular-season games left in his junior career, and there’s still much he’d like to accomplish. The Troops are second in the Central Division, three points behind the Sudbury Wolves.

“Not long ago we were tied for first place in the division, which I don’t ever recall happening in my previous four years. We have a chance to do something special here, and hopefully I can end my OHL career on a good note and give the fans here in North Bay something they can remember.”

The OHL record for career games is held by centre Cory Tanaka who, in 337 games over five seasons with the Plymouth Whalers and Belleville Bulls culminating in 2008-09, scored 55 goals and added 116 assists for 171 points.